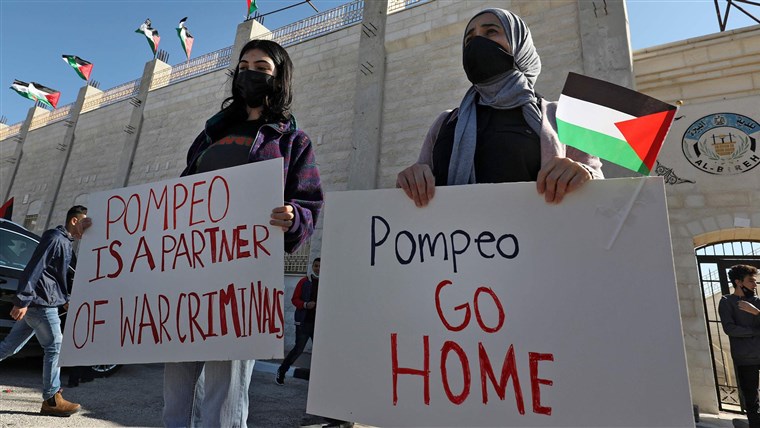 The visit is widely seen as the Pompeo’s last play to the Republicans’ evangelical base as the most pro-settler administration in U.S. history nears its end, and he looks ahead to a possible presidential run in 2024. In Israel, it will be seen as a parting gift to Israel’s ideological right-wing and the settler community in the occupied West Bank, a contested region that was captured from Jordan in 1967.

Pompeo landed in Israel on Wednesday, and met with Prime Minister Benjamin Netanyahu and Bahrain’s Foreign Minister Abdullatif bin Rashid Alzayani in Jerusalem. He also made a stop at Qasr al-Yahud, the traditional site of the baptism of Jesus in the Jordan Valley, according to a State Department official.

Pompeo also plans to visit the Golan Heights, land Israel seized from Syria in the same 1967 conflict and still seen as occupied territory by most of the international community.

The visit to the settlement is the latest in a series of moves by the Trump administration over the last four years to reverse 40 years of U.S. policy. Pompeo’s trip, the latest blow to Palestinian hopes, comes after the Palestinian Authority announced Tuesday it will resume cooperation with Israel in what was seen as a sign of optimism after President-elect Joe Biden’s win.

Beginning as early as 2017, U.S. officials began dropping public references to the West Bank and Golan Heights as “occupied territories.” Months after recognizing the Golan Heights as part of Israel in March 2019, the State Department formally rejected its own 1978 State Department legal opinion finding Israeli settlements in the West Bank “inconsistent with international law.”

Pompeo’s choice of destination in the contested territory was the Psagot Winery, involved last year in a high-profile case in which the European Union’s top court ruled countries must identify products made in Israeli settlements.

Yaakov Berg, the owner of the winery, has praised the Trump administration’s position on the settlements and even went so far as to name a “special” wine after the secretary of state.

Most of the international community considers settlements to be illegal based on the Geneva Convention principle that an occupying power is barred from transferring its population into war-won territories. They also see them as an obstacle to a two-state solution — a peace deal that hinges on the establishment of a separate Palestinian state.

Palestinian Prime Minister Mohammad Shtayyeh has called the visit to the winery a “dangerous precedent” that “legalizes settlements.”

The West Bank is home to 2,695,336 Palestinians and 441,600 settlers, according to figures collated by Peace Now, an Israeli organization that advocates a two-state solution.

On Thursday, Pompeo announced that the State Department will now regard the Boycott, Divestment and Sanctions movement (BDS), which calls for boycotts of goods made in the Israeli settlements, as anti-Semitic and punish those who support it.

Initially included in the Trump Administration’s Mideast peace plan, U.S. support for further annexation has been put on hold in favor of normalized ties between Israel and the Gulf States of the United Arab Emirates and Bahrain.

Earlier this year, Pompeo became the first Secretary of State to make an official visit to the Western Wall, and addressed the Republican National Convention from Jerusalem.

The speech remains under investigation by the anti-corruption Office of the Special Counsel as a potential violation of the Hatch Act which restricts U.S. officials from mixing electioneering with official government business.

Pompeo maintains he was acting in his “personal capacity,” when delivering the speech and he received approval from the State Department legal office, despite having flown to Israel for an official visit as secretary of state.

This is Pompeo’s fourth stop on a seven-country tour where every leader has recognized Biden’s winin spite of Trump’s own refusal to concede.

“Joe, we’ve had a long and warm personal relationship for nearly 40 years,” Netanyahu tweeted. “I know you as a great friend of Israel.”

Netanyahu immediately followed with a thank you to Trump for “the friendship you have shown the state of Israel and me personally.”

Netanyahu spoke with Biden on Tuesday, the day before Pompeo touched down in Israel. The pair agreed to meet soon and reiterated the need to continue to strengthen the strong alliance between the U.S. and Israel, according to a statement from Netanyahu’s office.

The president-elect has expressed opposition to unilateral annexation and the hope to revitalize prospects for a two-state solution but it is unclear what actions will be placed behind any condemnation of Israeli expansion.

Under most of the Obama administration Israeli settlements were referred to as “illegitimate,” and “obstacles to peace” but shortly before leaving office in a largely symbolic measure the U.S. allowed a U.N. Security Council resolution to pass declaring the settlements illegal under international law.

It was the first resolution criticizing Israeli settlements to be passed by the U.N. body in almost 40 years.