800 were arrested in a global sting operation. They were using an FBI-built app.

Home WORLD NEWS 800 were arrested in a global sting operation. They were using an FBI-built app. 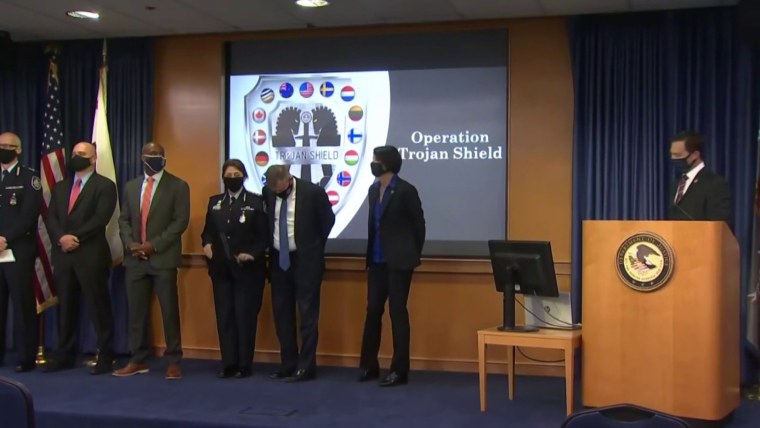 LONDON — A massive international sting involving 16 countries, including the U.S., has netted more than 800 suspects, the seizure of 8 tons of cocaine and more than $48 million, officials said Tuesday.

The FBI and Australian law enforcement developed and operated an encrypted device company, called ANOM, that was then used to gain access to organized crime networks in more than 100 countries, according to Europol, the law enforcement agency of the European Union.

“Operation Trojan Shield is a shining example of what can be accomplished when law enforcement partners from around the world work together and develop state of the art investigative tools to detect, disrupt and dismantle transnational criminal organizations,” said Calvin Shivers, the assistant director of the FBI’s Criminal Investigative Division in a press conference in The Hague, Netherlands.

ANOM’s users believed the devices to be secure, according to Jannine van den Berg of the Dutch National Police at the press conference. Access to the communications of those involved in criminal networks meant that law enforcement agencies were able to read encrypted messages over the course of 18 months.

“The worldwide implications of this investigation are staggering,“ Acting U.S. Attorney for the Southern District of California Randy Grossman told reporters in San Diego.

“I think what surprised us … is how open they were about planning,” FBI Special Agent in Charge Suzanne Turner told reporters in San Diego. “It was exactly what car was coming to what location. What maybe vessels or ships. They were very explicit in their detail because they believed it was secure communications.”

“The captured data has given the AFP evidence and unique insights into how organized crime works in Australia and internationally — how they move drugs, money, guns and organize murders,” she said.

In addition to the arrests and seizures of drugs, weapons and money, Shields said that the operation was able to mitigate over 100 threats to life. The access to their networks also enabled law enforcement agencies to see photographs of hundreds of tons of cocaine concealed in shipments of fruit and canned goods.

Authorities said they pulled the trigger on these mass arrests because the criminal enterprises had reached critical mass.

“This was an ideal time to take it down,” Turner said. “We decided, based on the amount of crime that was occurring, the threats to life, it was time to gets these criminals off the street.”

The scale of the cooperation between so many different countries made this operation notable, according to Keith Ditcham, a senior research fellow in organized crime and policing at the London-based RUSI think tank.

“I wouldn’t say it’s unheard of, but its rare,” he said. “Being able to mount an operation where all those differences and nuances in legislation and regarding intelligence collection, that requires a sizable amount of coordination and requires a lot of effort by the authorities to make sure the information is not leaked out.”

The fallout of the operation and exactly how it will affect organized crime groups in the future has yet to be seen, he said.

Australian Prime Minister Scott Morrison said in a press conference Tuesday that the operation “struck a heavy blow against organized crime — not just in this country, but one that will echo around organized crime around the world.”