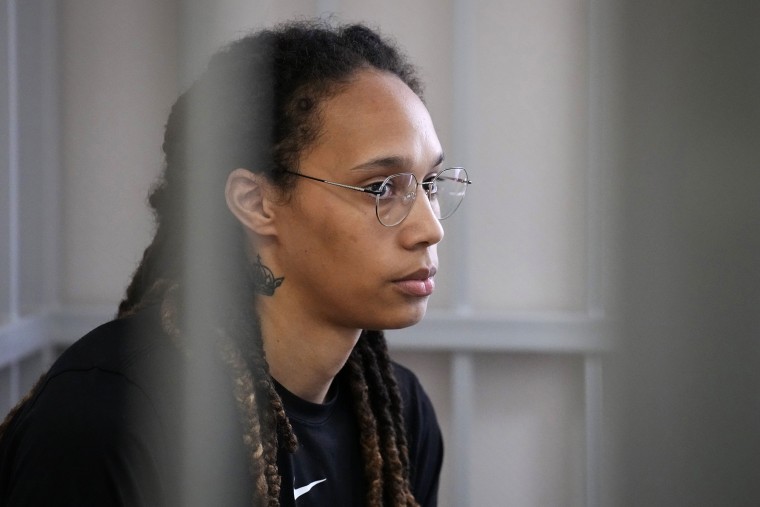 The U.S. government has proposed to Russia that it release detained Americans Brittney Griner and Paul Whelan in exchange for imprisoned Russian arms dealer Viktor Bout, two sources familiar with the matter confirmed to NBC News.

Griner, a WNBA star and Olympic gold medalist, has been held in Russia since February, and Whelan, a corporate executive, has been detained in the country since 2018.

Secretary of State Antony Blinken said Wednesday that the Biden administration had made a “substantial” offer to Russia to facilitate the release of Griner and Whelan, but he did not disclose further details about the proposal.

CNN reported earlier Wednesday that the Biden administration offered to swap Bout for Griner and Whelan.

Blinken laid out his plans to speak with Russian Foreign Minister Sergey Lavrov in the coming days at a news briefing Wednesday.

“We put a substantial proposal on the table weeks ago to facilitate their release,” Blinken said.

“Our governments have communicated repeatedly and directly on that proposal, and I’ll use the conversation to follow up personally and, I hope, move us toward a resolution,” he added.

Blinken said it would be the first time he has spoken with his Russian counterpart since the war in Ukraine erupted in February.

The Biden administration faces growing calls to do more to secure the release of the two Americans, who U.S. officials say have been wrongfully detained.

Griner, 31, was detained at Moscow’s Sheremetyevo Airport after Russian authorities said she was carrying vape canisters with cannabis oil, which is prohibited in Russia, in her luggage. She pleaded guilty this month.

Griner testified in a Russian court Wednesday that she did not intend to break the law.

Whelan was convicted of espionage in a Russian court about two years ago. He was sentenced to 16 years in prison.

A senior administration official said a high-level U.S. official reached out to the families of Whelan and Griner ahead of Blinken’s remarks Wednesday. The high-level official will have conversations with the families on Wednesday and Thursday, the source said.

Asked about the timing of Blinken’s announcement at a White House briefing later Wednesday, John Kirby, a spokesperson for the National Security Council, said, “We think making it clear that there is an actual proposal made, that there is something tangible on the table, is important context for the world to know about the United States’ seriousness with which we will try to get our citizens back home.”

Bout, dubbed “the Merchant of Death” because he was said to be one of the world’s largest illicit arms dealers, is serving a 25-year prison sentence in the U.S. after being convicted in 2011 of selling arms to Colombian rebels.

Bout was convicted of selling weapons to rebels with the understanding they would be used to kill Americans, U.S. officials have said.

The U.S. decision to offer a trade of Bout was made after months of discussions between President Joe Biden and his national security team, and it was made over objections from the Justice Department, according to people familiar with the talks.

The exchange, if it happens, would be the second this year with Russia.

In April, former U.S. Marine from Texas, Trevor Reed, was freed from a Russian prison in exchange for the release of Russian drug trafficker Konstantin Yaroshenko.

On Tuesday, NBC News published and aired an interview with Reed in which he said the White House was “not doing enough” to secure the release of Griner and Whelan.

Reed said on CNN Wednesday that he thinks Griner and Whelan “have a really good chance” of being released.

“I think that, you know, if the Russians are not stupid then they’ll take that offer,” Reed told CNN’s Jake Tapper.

Adrienne Watson, a White House spokesperson, said in a statement this week that Biden “has been clear about the need to see every American who is wrongfully detained or held hostage abroad released, including Brittney Griner.”

“Months ago, he directed his national security team to pursue every avenue to bring Brittney home safely to her family, friends, and loved ones,” Watson added. “The U.S. government continues to work aggressively, pursuing every avenue, to make that happen.”

Zoë Richards is the evening politics reporter for NBC News.