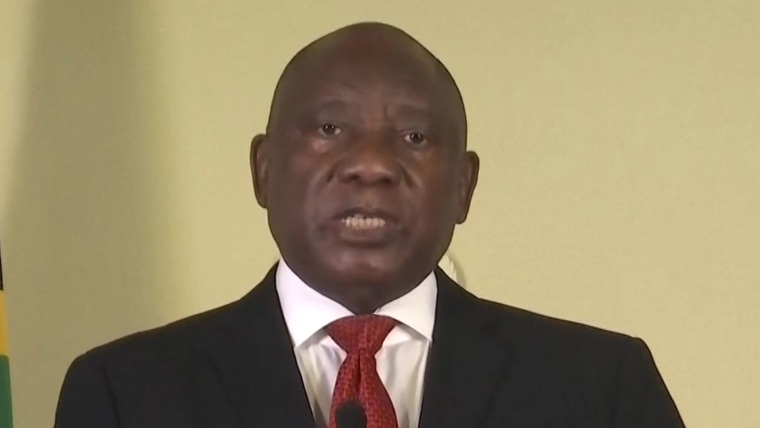 Archbishop Desmond Tutu, who helped lead the movement that ended the brutal regime of white minority rule in South Africa, has died at age 90, the country’s president confirmed Sunday.

“The passing of Archbishop Emeritus Desmond Tutu is another chapter of bereavement in our nation’s farewell to a generation of outstanding South Africans who have bequeathed us a liberated South Africa,” President Cyril Ramaphosa said in a statement early Sunday.

“Desmond Tutu was a patriot without equal; a leader of principle and pragmatism who gave meaning to the biblical insight that faith without works is dead.”

Tutu gained prominence through his work as a human rights campaigner. In 1984, he was awarded the Nobel Peace Prize for his tireless and nonviolent fight against apartheid in South Africa, and he later played a key role in downfall of the segregationist policy.

Tutu was diagnosed with prostate cancer in the late 1990s and was hospitalized several times in recent years to treat infections associated with his treatment.

“Ultimately, at the age of 90, he died peacefully at the Oasis Frail Care Centre in Cape Town this morning,” Dr. Ramphela Mamphele said in a statement on behalf of the family.

She did not give details of the cause of death.

Tutu, an Anglican clergyman, used the pulpit to preach and galvanize public opinion against the injustice faced by South Africa’s Black majority.

Tutu, the first Black bishop of Johannesburg and later the first Black archbishop of Cape Town, was a vocal activist for racial justice and LGBTQ rights not just in South Africa but around the world.

In 1990, after 27 years in prison, Nelson Mandela spent his first night of freedom at Tutu’s residence in Cape Town.

After the fall of the apartheid regime, with Mandela leading the country as its first Black president, Tutu headed the Truth and Reconciliation Commission, which laid bare the terrible truths of white rule.

“His contributions to struggles against injustice, locally and globally, are matched only by the depth of his thinking about the making of liberatory futures for human societies,” the Nelson Mandela Foundation said in a statement.

Tributes poured in from around the world.

Tutu’s legacy surpasses borders and “will echo throughout the ages,” U.S. President Joe Biden said in a statement Sunday.

“We were blessed to spend time with him on several occasions over the past many years,” Biden said on behalf of himself and his wife, Jill. “His courage and moral clarity helped inspire our commitment to change American policy toward the repressive Apartheid regime in South Africa.”

Biden was outspoken about apartheid when he traveled to the country as a senator in 1976, when he said he refused to be separated from his Black colleagues. A clip of him arguing against apartheid in a Senate hearing in 1986 resurfaced during this 2020 presidential campaign.

Former President Barack Obama said in a statement that Tutu “was a mentor, a friend, and a moral compass for me and so many others. A universal spirit, Archbishop Tutu was grounded in the struggle for liberation and justice in his own country, but also concerned with injustice everywhere.”

“He never lost his impish sense of humor and willingness to find humanity in his adversaries, and Michelle and I will miss him dearly,” Obama said.

Former President Bill Clinton said in a statement Sunday that Tutu had an “unshakeable faith in the inherent decency of all people.” He said Tutu’s life was a “gift.”

“His own heart was good enough to seek reconciliation not revenge, to reject demonization and embrace his uncanny ability to bring out the best in others,” Clinton said. “Those of us touched by the gift of his life owe it to him to pass it on.”

British Prime Minister Boris Johnson that he was “deeply saddened” by the death of Tutu, who he said “will be remembered for his spiritual leadership.”

Queen Elizabeth II recalled her meetings with Tutu with “fondness,” remarking on his warmth and humor.

“Archbishop Tutu’s loss will be felt by the people of South Africa, and by so many people in Great Britain, Northern Ireland and across the Commonwealth, where he was held in such high affection and esteem,” the queen said.

The Dalai Lama, Tibet’s exiled spiritual leader, said, “The friendship and the spiritual bond between us was something we cherished.” Tutu, he added, “was a true humanitarian and a committed advocate of human rights.”

Outspoken and exuberant, Tutu never wavered in his fight for a fairer South Africa and continued to call the Black leaders of the country’s new democracy to account.

In his final years, he said he regretted that his dream of a “rainbow nation” had yet to come true.

Tutu largely retired from public life in 2010 but never stopped speaking his mind with wit and tenacity.

He is survived by his wife of 66 years, Leah, and their four children.

His death comes little more than a month since the passing of F. W. de Klerk, the country’s last apartheid president.

Max Burman is a news and homepage editor for NBC News.