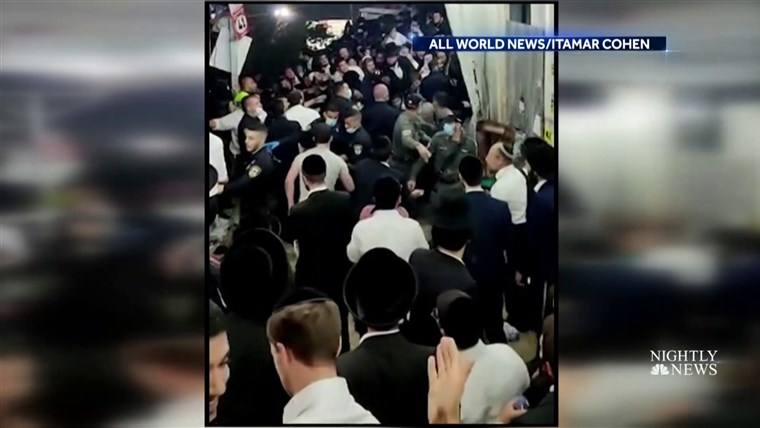 JERUSALEM — A teenager from New Jersey was among the Americans who died in Friday’s stampede at a religious festival in Israel, the office of the country’s chief rabbi confirmed Sunday.

The American, Donny Morris, 19, was named as one of the 45 people who died in the crush, along with Eliezer Zvi Yuzef, 26, and Menachem Knoblowitz, 22, both of New York. Yousef Amran Tauber and Yousef Kahn were also killed. Their ages and home states were not released.

Jonathan Shrier, the U.S. chargé d’affaires in Israel, confirmed on Twitter that six citizens and two legal permanent residents were among the dead.

With a heavy heart I confirm the United States lost 6 citizens and 2 Legal Permanent Residents in the tragedy at Mt. Meron. We continue to work with local authorities to provide all possible support to grieving families.

Morris had been studying in Israel, Rabbi Yechiel Morris, his uncle, told several media outlets Saturday as he confirmed his nephew’s death.

As Israel observed a day of mourning Sunday, flags across the country were lowered to half-staff to honor the dead in what was one of the country’s worst civilian disasters.

In accordance with Jewish tradition, funerals were held with as little delay as possible. More than 20 victims were buried overnight after official identification was completed.

The deadly stampede occurred during celebrations of Lag BaOmer at Mount Meron in northern Israel, by the tomb of an ancient Jewish mystic, Rabbi Shimon bar Yochai.

Every year, tens of thousands of people — most of them ultra-Orthodox Jews — throng to the area to celebrate the rabbi and light bonfires as part of the celebrations. The event was the first mass religious gathering to be held legally since Israel lifted nearly all restrictions related to the coronavirus pandemic.

It is unclear what caused the stampede. Video showed people being pulled back and forth by the sheer momentum of the tightly packed crowd. Other images showed a mass of people, most of them men clad in black, spilling down a narrow open-air passage.

Questions have been raised as to whether the government and police had been reluctant to limit the crowd so as not to anger influential ultra-Orthodox rabbis and politicians.

The Justice Ministry said investigators would look into whether there had been any police misconduct.

Prime Minister Benjamin Netanyahu, who has called the incident “one of the worst disasters to hit the state of Israel,” has also promised an investigation.

“One of the parents told me the sentence that summarizes everything: ‘Here one reveals that the people of Israel has one heart,'” Netanyahu said in a statement. “Our heart is with the injured and all of us hope and pray for their full recovery.”

Pope Francis said Sunday in his address in St. Peter’s Square at the Vatican that he would remember the victims and their families in prayer.

“With sadness, I express my closeness to the people of Israel for the incident last Friday on Mount Meron that caused the death of 45 people and numerous injuries,” Francis said.

“The loss of life among worshipers practicing their faith is heartbreaking,” Biden said in a statement.

Lawahez Jabari reported from Jerusalem and Yuliya Talmazan from London.