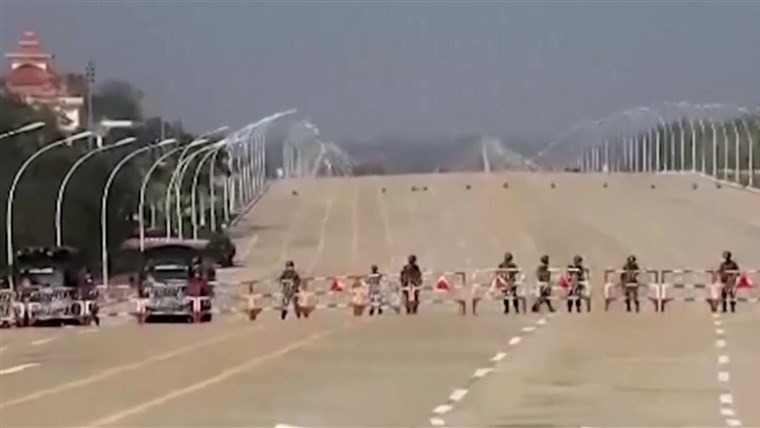 She will be held until at least Feb. 15 on charges relating to the alleged ownership of illegal walkie-talkies, according to a police statement seen by Reuters. NBC News has not been able to verify the police statement.

Kyi Toe, a spokesperson for Suu Kyi’s party, the National League for Democracy, confirmed the charge on his Facebook page. He added that the country’s president, Win Myint, who was also detained Monday, was charged with violating natural disaster management laws.

The military detained Suu Kyi and other officials and declared a year-long state of emergency on Monday, the day before legislators were due to start a new term in office.

The news comes as health workers in the country announced they would not support the new government and wore red ribbons to show their dissent. On Tuesday night people across Myanmar banged pots and pans and honked car horns in a sign of civil disobedience against the military junta.

Suu Kyi on Monday urged people across the country to oppose the military takeover in a statement that was prepared ahead of her detainment.

The charges against Suu Kyi came as international condemnation of the military takeover in the country of 55 million grew. The G7 group of wealthy nations, which includes the U.S., U.K. and France, on Wednesday said it was “deeply concerned” by the detention of of political leaders and civil society activists and the targeting of the media.

The G7 also called on the military to respect the result of the November election, in which Suu Kyi’s National League for Democracy party won 83 percent of the vote. The country’s election commission has rejected allegations of impropriety.

The past two months have seen tensions grow as the military claimed that the election was fraudulent.

The Biden administration’s declaration that the military takeover was a coup will trigger a review of U.S. foreign aid to Myanmar, which is scheduled to receive about $100 million in U.S. assistance this year.

However, that aid is largely humanitarian and direct economic aid, and little of those funds are expected to be restricted by the new review.

Suu Kyi spent 15 years as a political prisoner between 1989 and 2010. She was awarded the 1991 Nobel Peace Prize in absentia for championing democracy and rights under the then-ruling junta.

However, her reputation was tarnished by her failure to condemn the military for a brutal campaign against the Rohyinga Muslim minority population, that many analysts say amounts to genocide. In 2017, hundreds of thousands of Rohingya fled to neighboring Bangladesh to escape what has been called an ethnic cleansing campaign involving mass rapes, killings and the torching of homes.

Some Rohingya, already reluctant to return to Myanmar, are now even more unsure.

“Now if we go back into the hands of people who are responsible for our torture, we will probably have to bear twice as much pain as before,” said Mohammad Jaffar, 70, in an interview with the Associated Press.

In addition to Suu Kyi and other officials, there is evidence political activists are also being targeted by the military. Activist and former political prisoner Mya Aye was detained by the military on Monday, according to his daughter Wai Hnin Pwint Thon. His arrest was captured on neighborhood CCTV.

“We haven’t heard where he is, how he is or how long he will be there,” she told NBC News.

Reuters and The Associated Press contributed to this article