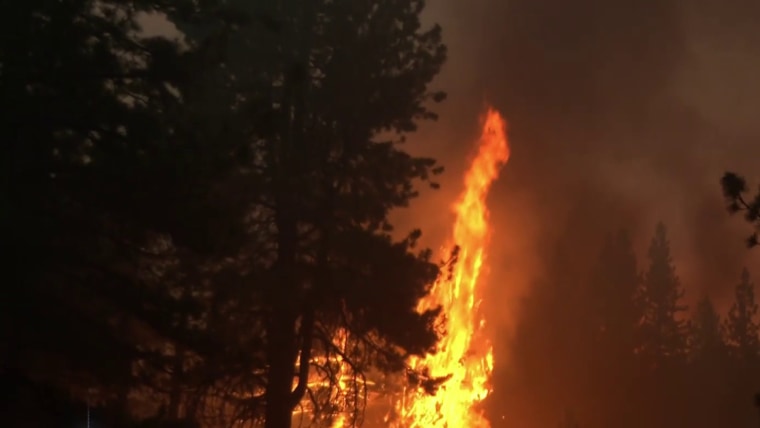 The sobering assessment also found that some changes that are already playing out, such as warming oceans and rising sea levels, are “irreversible for centuries to millennia.”

U.N. Secretary General António Guterres called the findings a “code red for humanity,” adding that the “alarm bells are deafening, and the evidence is irrefutable.”

The report is the most comprehensive assessment from the U.N.’s Intergovernmental Panel on Climate Change (IPCC) since 2013 and provides the strongest case yet for human-caused global warming, saying it’s “unequivocal that human influence has warmed the atmosphere, ocean and land.”

The report also found that climate change is intensifying, occurring at an accelerated pace and is already affecting every region of the planet.

“It has been clear for decades that the Earth’s climate is changing, and the role of human influence on the climate system is undisputed,” Valérie Masson-Delmotte, co-chair of the IPCC’s Working Group I, said in a statement.

Ko Barrett, the IPCC’s vice- chair and a senior climate adviser at the National Oceanic and Atmospheric Administration, told NBC News that the report shows that no matter what humans do going forward, the future will be hotter than it is now.

“It can be kind of demoralizing or depressing to think that there are so many things that are kind of irreversible for a long period of time,” Barrett said. “But the good news is that, that these irreversible changes can be slowed down with rapid, strong and sustained reductions in greenhouse gas emissions.”

The IPCC, established in the late 1980s, consists of thousands of scientists across 195 member governments who pore over the most recent published and peer-reviewed research on global warming and compile the findings into a report on the current state of the climate. The assessment, which includes a look at the future risks and impacts of climate change, typically represents consensus within the scientific community. More than 230 authors contributed to the latest report.

The assessment comes less than three months before world leaders are set to convene from Oct. 31 to Nov. 12 in Glasgow, Scotland, for the 2021 U.N. Climate Change Conference. Countries are expected to set forth ambitious targets to reduce emissions by 2030, and the IPCC’s findings will likely feature prominently in the discussions.

John Kerry, former secretary of state and the U.S. special presidential envoy for climate, said in a statement that the report should compel leaders to take aggressive action to put the planet on a path toward net zero emissions by midcentury.

“What the world requires now is real action. All major economies must commit to aggressive climate action during this critical decade,” he said. “We can get to the low carbon economy we urgently need, but time is not on our side.”

The report states that greenhouse gas emissions from human activities have caused global warming at a rate not seen in at least the past 2,000 years. It’s estimated that human-caused climate change is responsible for approximately 1.1 degrees Celsius of warming since 1850-1900, the earliest period with reliable measurements of global surface temperatures, the authors wrote.

What’s more, the report found that global temperatures are expected to exceed 2 degrees Celsius of warming this century “unless deep reductions in [carbon dioxide] and other greenhouse gas emissions occur in the coming decades.”

“The report makes it very clear: If we want to limit warming to any level that is sort of manageable, you have to just cut back the emissions very deeply and immediately,” said Corinne Le Quéré, a professor of climate change science at the University of East Anglia in the U.K., who was not involved with the IPCC assessment.

While the findings are grim, she said, “the responsibility to act is in our hands.”

Climate scientists have warned that the increase in average global temperatures should be limited to under 2 degrees Celsius, or 3.6 degrees Fahrenheit, in order to avoid the most devastating effects of global warming. The 2-degree benchmark was set by climate negotiators in Copenhagen in 2009, but studies have increasingly found that the target may already be out of reach.

In a news briefing Monday, Inger Andersen, under-secretary-general of the United Nations and executive director of the United Nations Environment Programme, said the IPCC has been warning of the dangers of climate change for more than three decades, but that countries — especially the world’s biggest economies that are responsible for the bulk of greenhouse gas emissions — haven’t done enough to address the problems.

The new IPCC assessment goes further than any of the group’s previous reports in linking human-caused climate change with increases in extreme weather events around the world.

Recent events, including widespread drought in the western U.S., heat waves across Europe and North America and devastating wildfires in Greece, Turkey and the U.S., have highlighted the consequences of a warming world.

“The climate is behaving like an athlete on steroids,” said Erich Fischer, a climate scientist at ETH Zürich and one of the authors of the IPCC assessment.

The report also details how the increasing ocean and surface temperatures will cause myriad physical changes in climate — including drought, heat waves, heavy rainfall and coastal flooding — in different regions of the planet.