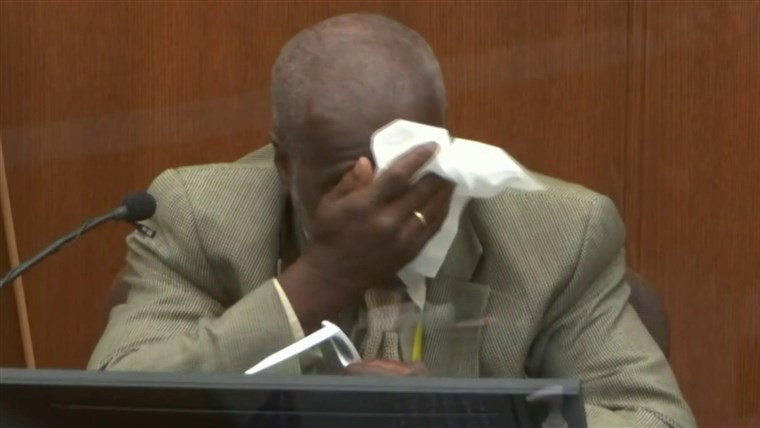 LONDON — Nine minutes on a Minneapolis street last May sparked a long, defiant summer of protests across the world.

Now, as the first trial in George Floyd’s death is underway, an official U.K. report on racial inequality that was ordered in its wake has triggered fresh anger and demands for change.

The highly-anticipated report — commissioned by Prime Minister Boris Johnson last year and published on Wednesday — found that although more needs to be done, Britain should be seen as a “model for other white-majority countries.”

That conclusion has provoked fury from critics who have branded the report “divisive” and a “missed opportunity” for the United Kingdom, which saw tens of thousands protest across the country last year condemning racism and championing the Black Lives Matter movement.

“This race report is a whitewash, it’s a slap in the face of all the anti-racism efforts being done today,” Dr. Shola Mos-Shogbamimu, a lawyer, activist and author of “This Is Why I Resist” told NBC News.

“It gaslights the entire nation when it denies that racism is structural,” she said. “As a nation we should be ashamed of it.”

The publication of the 258-page report amid the ongoing trial was “utterly disrespectful,” said Mos-Shogbamimu, adding that Black people on both sides of the Atlantic routinely face issues like police brutality and mass incarceration.

The report was conducted by an independent Commission on Race and Ethnic Disparities, nine of whose 10 members were Black. Johnson established the commission last year after the nationwide protests over Floyd’s death.

It found that although “impediments and disparities do exist, they are varied, and ironically very few of them are directly to do with racism,” Dr. Tony Sewell, the commission’s chairman, said in the report’s foreword. “Put simply we no longer see a Britain where the system is deliberately rigged against ethnic minorities.”

Johnson on Thursday called the report a “very interesting piece of work” and said his government would look at its recommendations before formulating a fuller response.

“I don’t say the government is going to agree with absolutely everything in it, but it has some original and stimulating work in it that I think people need to read and to consider,” he told reporters. “There are very serious issues that our society faces to do with racism that we need to address.”

Some commentators have sought to frame the report as part of a broader “culture war” underway in post-Brexit Britain — often stoked, they say, by Johnson’s Conservative government.

Clashes have emerged in recent months over nationalist hymns, the Union Jack flag and the status of colonial-era statues and museum exhibits.

“Is this for real?” Marsha de Cordova, an opposition member of Parliament, tweeted Wednesday.

“This report was an opportunity to seriously engage with the reality of inequality and institutional racism in the U.K.,” de Cordova, the shadow secretary for women and equalities, said in a statement. “Instead we have a divisive polemic, which cherry picks statistics.”

Author Kehinde Andrews, a professor of Black studies at Birmingham City University, told Sky News the commission had painted a “fairytale” picture of Britain. (Sky News is owned by Comcast, the parent company of NBC News.)

“Let’s be honest, this was never a genuine attempt to deal with the issue of racism,” he said.

From Buckingham Palace to Downing Street, the racial reckoning that erupted forced companies, colleagues and royal families to grapple with issues of race and identity.

For Mercy Longe, 22, a student in London, the recent allegations made by Meghan, the Duchess of Sussex, about racism in the royal family were proof of “ongoing racial tensions” in Britain at all levels of society.

Longe said she was “disturbed” by the government report.

“The U.K. has a very long way to go, and to self-applaud when there are such massive debates going on is quite shocking,” she said. “To basically boast about how other countries should follow suit, I thought was just pretty ridiculous.”

The report found that overt and outright racism did persist, particularly online, and acknowledged that Britain was not yet a “post-racial society” of equal opportunity.

But it concluded that family influence, socio-economic background, culture and religion were more significant factors on life chances than the existence of racism.

It also gave significant credit to educational attainment by ethnic minority groups, as proof that institutional racism was not to blame for social disparities.

However for Halima Begum, head of the race equality think tank the Runnymede Trust, educational success should instead be viewed as a “clear acknowledgement” that immigrants and minorities “are often left to pull themselves up by their bootstraps, urging their children to over-achieve in school, precisely because there is not the necessary institutional support available to them.”

Black Britons were more likely to be stopped and searched by police, die in childbirth and be excluded from schools, according to data from the think tank, while Black communities have also suffered disproportionally during the coronavirus pandemic.

“The government appears completely unable to acknowledge or even show any empathy for the incidence of racism in the U.K.,” Begum said by email.

There was some cause for optimism in everyday life, said Gary McFarlane, 60, a Black Lives Matter U.K. activist from London, who said he was “sick and tired” of government-backed reports and inquiries.

“It’s getting worse in terms of institutions … but in many other respects you could argue on the ground, where people actually live together, things have actually improved,” he said.

“That’s what gives me hope for the future.”