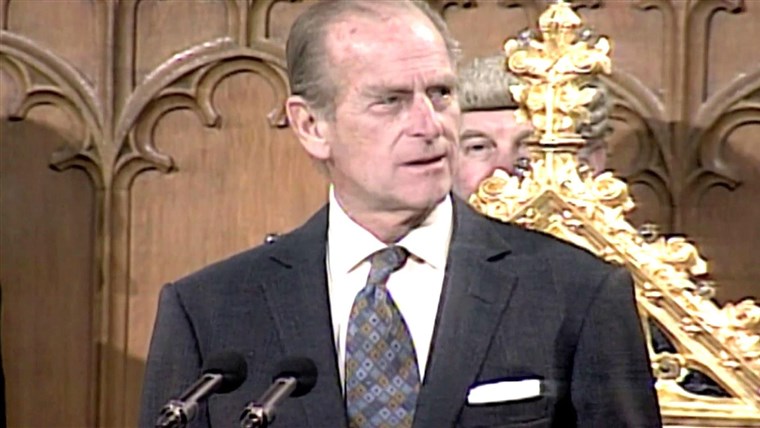 LONDON — Over Prince Philip’s 99 years, he was portrayed as a modernizer, a frustrated consort to the monarch and later an occasionally cranky old man who spoke his mind, made some memorable gaffes and promoted the U.K. both at home and around the world.

More recently, Philip was in the news for his illness rather than his accomplishments — and a fictionalized, exaggerated version of him was introduced to millions of viewers of the Netflix series “The Crown.”

But how much of the public’s perception is based on reality?

When Philip married Princess Elizabeth in 1947, the couple most likely presumed it would be decades before she assumed the crown. But in 1952, Elizabeth’s father, King George VI, died at age 56, and she became queen at age 25.

In “The Crown,” Philip is portrayed struggling with his new role and pushing back against the strictures of royal life. That was probably the case at the beginning of the queen’s reign, but he settled into his position as the years went on, said Clive Irving, author of “The Last Queen: How Queen Elizabeth II Saved the Monarchy.”

Irving pointed to Philip’s 1956 tour of Commonwealth countries as evidence of his need for breathing room.

“It is understandable that as a hot-blooded young buck, as soon as he entered into the orbit of the awful royal court and all the flunkies telling him what to do, it didn’t suit him,” he said. “It’s not surprising that he blew his stack and went off on the boat for six months. He wanted to get away from the awful court atmosphere, where he felt constrained.”

As time went on, however, Philip was able to make the job his own. In addition to accompanying the queen on her travels abroad and serving as patron to hundreds of organizations, he founded awards for design and industry, instituted an interfaith dialogue and was the first president of the World Wildlife Fund-UK.

Later in life, he said his main job was to support his wife in her role as monarch.

Philip’s arrival in the British royal family coincided with the growth of television, a medium he was eager to embrace. He is said to have been involved in the decision to televise the queen’s coronation in 1953, and he was the first member of the royal family to give a TV interview, in 1961, when he promoted the benefits of technical skills and training.

In 1969, he appeared on NBC’s “Meet the Press” and defended the monarchy when he was asked about it as a system of government.

“With us, it happens to be that we just choose the son of the father. Somebody has got to do the job. Why not do it that way?” he said.

The queen, famously tight-lipped, rarely grants interviews or offers even a glimpse into her thoughts. Philip, however, said plenty to keep royal watchers busy. Over his nearly 10 decades, he became known for comments that caused offense on many occasions, particularly on the subject of race.

In 1999, Philip asked the British politician John Taylor, “And what exotic part of the world do you come from?” Taylor, whose parents were from Jamaica, replied that he was from Birmingham, one of England’s biggest cities.

One of Philip’s most famous quotations was made in China in 1986, when he told a British student that “if you stay here much longer, you’ll go home with slitty eyes.”

Other comments have been brutally honest, as in 1967, when he was asked whether he would like to go to Moscow to help ease Cold War tensions.

“I would very much like to go to Russia — although the bastards murdered half my family,” he replied. Philip was related to the Romanovs, who ruled Russia until the Bolsheviks executed Nicholas II and his family in 1918.

Philip also notoriously lost patience while carrying out royal responsibilities, telling a photographer in 2015 during a photo session to commemorate the 75th anniversary of the Battle of Britain to “just take the f—— picture.”

Philip is often mentioned as having been an “outsider” when he married Elizabeth in 1947. While he wasn’t a member of the traditional British aristocracy or nobility, he was certainly familiar with the ways of the royals, having been born into a royal family. What’s more, he and Elizabeth were distant cousins and great-great grandchildren of Queen Victoria.

Philip was born in Corfu, Greece, where his uncle was the king. Philip’s family fled when he was a baby after his uncle was forced to abdicate. His family initially went to Paris, and then Philip went to live with his grandmother in Kensington Palace, without his parents. Although the family no longer had their royal positions, they had their titles. Philip renounced his when he married Elizabeth.

He attended British schools and joined the Royal Navy. Despite his royal lineage, there was no plan for him to spend a life in service to the crown as a minor royal. He was going to have to support himself.

Irving said there was “a lot of hesitancy in court and palace about whether he was the right match.”

Looking back at how he supported the queen throughout their marriage, members of the royal family say the opposite is true.

“For her to have found somebody like him, I don’t think she could have chosen better,” his daughter-in-law Sophie, the Countess of Wessex, told ITV in 2016. “They make each other laugh, which is half the battle, isn’t it?”