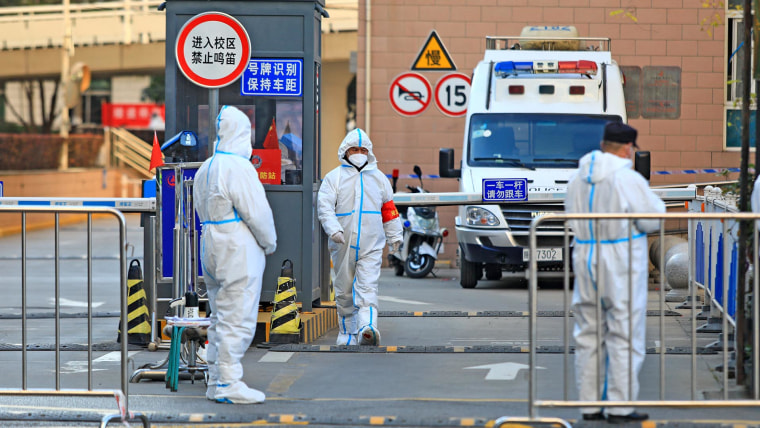 Officials in Xi’an have been punished after reports emerged of people being denied lifesaving medical treatment and running low on food amid a strict coronavirus lockdown in the Chinese city of 13 million.

Xi’an, an ancient capital and now major center of industry 600 miles southwest of Beijing, was locked down late last month amid China’s worst outbreak of the coronavirus since it was first detected in Wuhan in late 2019. Residents have been told to stay home except to get tested for Covid.

In recent days, outrage over the lockdown conditions has swelled as people shared personal stories online, forcing authorities to apologize and announce disciplinary action against officials. One account posted on the popular Chinese social media platform Weibo said a heavily pregnant woman miscarried outside the Xi’an Gaoxin Hospital on Jan. 1 after she was refused entry because she hadn’t been tested for the virus recently enough.

“The blood ran down the chair and her pants, the ground was covered in blood,” a user named Biexiayulechengma, described as a relative of the woman, said in a post. “The 8-month-old child was stillborn and had no heartbeat.”

The post has since been deleted and further posts on the account hidden from public view, but a hashtag spreading news of the report has been viewed hundreds of millions of times on the platform. NBC News was unable to independently verify the post or the facts of the report.

An employee in the hospital’s publicity department said she was aware of the incident but did not know what exactly happened. Other hospital staff declined to answer questions on the phone or did not answer.

Vice Premier Sun Chunlan said Thursday that she was “deeply ashamed” that the woman had miscarried because of delayed treatment. “It revealed the laxity and imprecision in our Covid prevention work, and taught everyone a profound lesson,” Chinese state media quoted her as saying.

Speaking at a news conference the same day, Liu Shunzhi, director of the Xi’an municipal health department, confirmed that a pregnant woman miscarried after waiting for two hours outside the entrance to the hospital.

“This is an accident caused by negligence,” he said, reading from a statement later posted online by the Xi’an municipal government.

Following investigations, the provincial and municipal health committees found that the hospital had failed to triage patients correctly and had “insufficient” emergency response plans, Liu said.

The hospital’s general manager was suspended and those in charge of the outpatient department and the medical department were dismissed, he added.

The municipal government said in an earlier statement posted on Weibo Thursday that disciplinary action had also been taken against Liu and Li Qiang, Chinese Communist Party director of the Xi’an emergency center, but did not give further details.

Social media users had expressed outrage over the woman’s miscarriage.

“Because of fear of this disease with very low mortality, a pregnant woman with severe bleeding was ignored,” one person posted on Weibo. “What is the logic?”

Some online commenters pointed out that in recent years the Chinese government had reversed its strict one-child policy to encourage more births amid a growing demographic crisis. According to recently published data from the National Bureau of Statistics, China’s birth rate in 2020 was below 1 percent, the lowest since 1978.

Government officials have said no hospital should allow epidemic prevention and control to affect the treatment of patients.

China is still pursuing a policy of “zero Covid” long after much of the world has decided to try to live with the virus. Heavy restrictions enacted to stamp out virus outbreaks are not uncommon in the country, which is set to hold the Winter Olympics in Beijing next month. China has fully vaccinated nearly 85 percent of its population, according to Our World in Data.

People in Xi’an have been told to stay home as workers sprayed pathogen-killing solutions onto roads and buildings to disinfect the city. Residents were told to close their windows and avoid touching outdoor surfaces to prevent contact with the chemicals. On Wednesday, international passenger flights at the Xi’an Xianyang International Airport were suspended, Chinese state media reported.

These measures have taken a heavy toll on people, and the miscarriage was not the only report of Xi’an residents struggling to access lifesaving medical care. In another Weibo post, a person whose username translates as Sunflowerrr0000 described desperate attempts to seek medical treatment for the user’s father, who was suffering from chest pains.

The user described spending hours trying to find a hospital willing to treat the father before he was eventually admitted. The father later died, the user said.

“I can’t imagine the desperation and suffering that my father experienced in the last few hours of his life,” the user said. “I lost my dad forever.”

The reports followed a flurry of wider complaints on social media about conditions in Xi’an, where the lockdown has lasted more than two weeks. Weibo users said it had become difficult to buy food in the city, citing high prices and missing deliveries, and that the Covid health code system, used to regulate people’s movements did not always work properly.

“Staying at home and having no income has already made my life very difficult, and now the price of food is also rising!” one user posted on the platform. “Even having a meal is a real challenge now.”

The state-owned Global Times newspaper reported Wednesday that the head of big data in the city, Liu Jun, had been suspended after the health code system crashed twice amid citywide virus screening.

The city reported 63 new confirmed infections Wednesday, bringing the total number of cases in the Xi’an outbreak to more than 1,800 since it began Dec. 9.

Meanwhile, the city of Yuzhou, in the central province of Henan, has also been locked down since Monday night amid a small outbreak, with authorities ordering its 1.1 million residents to remain indoors and not to leave town.