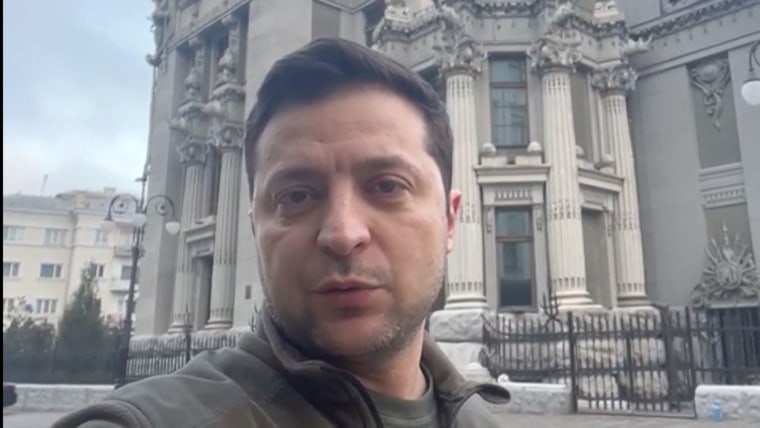 Shelling and explosions rocked Ukraine on Sunday as fighting entered its fourth day, and allies doubled down on measures intended to punish Russia for its assault.

South of the capital Kyiv, a missile strike in the city of Vasylkiv caused a fire at an oil depot in the nearby village of Kryachky, Vasylkiv Mayor Natalia Balasinovich said in a video message.

Fighting was ongoing and prevented emergency services from extinguishing the fire, said Alexey Kuleba, head of the administration in Kyiv Oblast. “We are in danger of an ecological catastrophe. We do everything possible to prevent this!” he said in the statement.

Meanwhile, the U.S. along with the European Commission, France, Germany, Italy, the United Kingdom and Canada announced Saturday that select Russian banks would be removed from the SWIFT messaging system.

The option had been on the table, but some allies in Europe with economies more closely tied to Russia’s had been reluctant to include SWIFT among sanctions because of the possible impact it could have.

The skies were similarly unclear for Russia as Germany was preparing to close its airspace to Russian aircraft. It would be the latest European country to take that step as a reaction to the invasion.

The United Kingdom, Romania and the Baltic states of Estonia, Latvia and Lithuania have plans to close their airspace to Russian aircraft or have already done so.

Also Saturday, German airline Lufthansa said it will not use Russian airspace for the next seven days “due to the current and emerging regulatory situation.”

The U.S. and other allies like Germany were also speeding badly needed weaponry and supplies to the outgunned Ukrainians, who were refusing to surrender.

Also, the former Soviet republic of Kazakhstan, which is one of Russia’s closest allies, surprised Moscow-watchers by announcing that it will deny Putin’s request for Kazakh troops to help subjugate Ukraine.

Kazakhstan also said it would not join Putin in recognizing the breakaway pro-Russian Luhansk and Donetsk regions in eastern Ukraine.

“We have withstood and successfully repelled enemy attacks,” Ukrainian President Volodymyr Zelenskyy said in a speech Saturday morning to his countrymen. “The fighting continues in many cities and districts of our state, but we know that we are protecting the country, the land, the future of children.”

Zelenskyy has also asked United Nations Secretary-General António Guterres to strip Russia of its vote on the Security Council.

Russia was the only country to veto a U.N. resolution Friday that demanded Moscow end its attack on Ukraine. As a permanent member of the Security Council, Russia holds veto power over all resolutions made by the international body. Three countries abstained.

As Zelenskyy rallied his countrymen, Russian forces were less than 20 miles away from Kyiv but struggling to pierce the outer ring of the city’s defenses, the U.S. official said.

Some of the heaviest fighting has been reported in and around the city of Kharkiv, the official said. And the Ukrainian Air Force was still challenging the Russians in the sky despite being barraged by some 250 short-range missile strikes.

Zelenskyy and his government have refused to leave the capital, though the Ukrainian president has said he believes he is the number-one target of the Russian attack. Instead, he has been posting videos from the streets, urging his people to join him in defiance.

The U.S. defense official declined to comment on reports that Zelenskyy rebuffed a U.S. offer to evacuate him from the country.

One of Zelenskyy’s presidential predecessors was also staying in Kyiv to defend his homeland.

Elsewhere, artillery and cruise missiles pounded cities across Ukraine, where Russian troops and armored vehicles have poured over the border. But American and British officials said their advance was slowed after meeting far greater Ukrainian resistance than expected.

Russia’s defense ministry claimed to have captured the southern city of Melitopol, with video posted to social media showing a Russian flag flying above a police station in the city. But the British government said it had failed to capture the city of 150,000 as well as achieve any of its major goals in the first days of the conflict.

“We can’t see anything to substantiate” the claim that Melitopol had fallen and it still appeared to be “in Ukrainian hands,” British armed forces minister James Heappey told the BBC early Saturday.

“The reality is that the armored columns that were coming down from Belarus and the north that were going to encircle Kyiv are still some way north because they’ve been held up by this incredible Ukrainian resistance,” he said.

Meanwhile, Moscow’s unprovoked attack on its democratic neighbor has drawn widespread condemnation and turned Putin into an international pariah.

Tens of thousands of Ukrainians have fled the Russian advance, mostly to neighboring Poland and Romania.

Those who stayed were enduring an assault that Ukraine and international watchdogs said was increasingly hitting civilians.

The Russian attack has upended the West’s sense of security, especially in countries on NATO’s eastern flank with a long history of battling Moscow, including Poland, Lithuania, Latvia and Estonia.

NATO has moved to reinforce its eastern flank and U.S. Secretary of State Antony Blinken on Saturday authorized an additional $350 million in military assistance to Ukraine, including anti-armor, small arms and other equipment.

“Today, as Ukraine fights with courage and pride against Russia’s brutal and unprovoked assault, I have authorized, pursuant to a delegation by the President, an unprecedented third Presidential Drawdown of up to $350 million for immediate support to Ukraine’s defense,” Blinken said in a statement.

Germany, which has been criticized for being slow to condemn the Russian invasion and for being reluctant to impose sanctions on Moscow, announced Saturday that it was sending the Ukrainians 500 ground-to-air “Stinger” missiles and 1,000 tank defense weapons.

“The Russian raid on Ukraine marks a turning point,” German Chancellor Olaf Scholz said in a statement. “It threatens our entire post-war order. In this situation, it is our duty to support Ukraine.”

Military experts said Russia still has the overwhelming advantage, but it’s not clear it has enough of an advantage to take over a Texas-sized country with 43 million people that has already found the weak spots in the Russian offensive.

“I just don’t believe that they have the capability, especially the further they go from Russian sovereign territory and from Belarus, that they will be able to maintain this,” retired Gen. Ben Hodges, former commanding general, United States Army Europe and Pershing Chair in Strategic Studies at the Center for European Policy Analysis, said on MSNBC.

“And I think these convoys of big fuel trucks, for example, that have to follow the tanks — these things, they are very vulnerable, and I think we’re going to see more and more reports of these convoys being hit.”

‘We won’t put down our weapons’

Overnight, many Kyiv residents huddled in underground shelters and subway stations while officials imposed a strict curfew to root out the “enemy.” Armed with government-issued machine guns and homemade Molotov cocktails, Ukrainian civilians were helping to reinforce their army’s desperate but for now effective resistance against Putin’s invasion.

Zelenskyy said that Russia wanted to capture the city and install its own “puppets” to run Ukraine. His warnings have been echoed by Western officials who say Putin intends to decapitate Ukraine’s pro-western government and possibly replace it with a Moscow-friendly regime.

In a video posted to social media earlier Saturday, Zelenskyy stood on a Kyiv street and rejected what he said was Russian disinformation that he had told his forces to surrender.

“We won’t put down our weapons,” Zelenskyy said. “We will protect our country because our weapon is our truth and it is our land, our country, our children and we will defend all of it.”

Peskov said that Kyiv refused the offer, so the Russian attack had resumed Saturday afternoon.