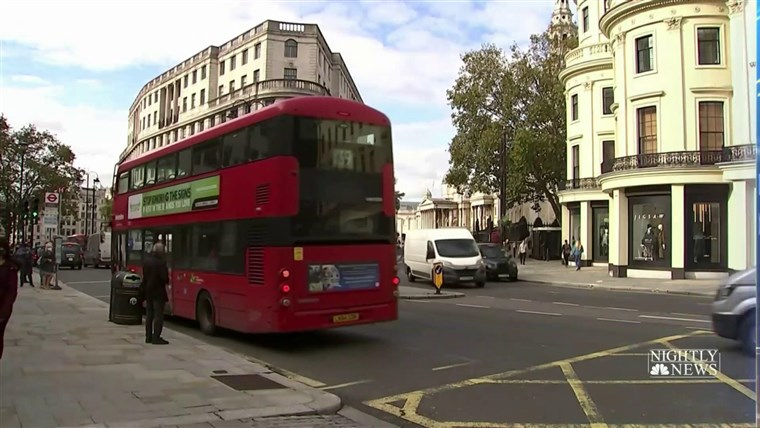 PARIS — The French government’s decision to impose a curfew on almost a third of the population has prompted cries of alarm and anger in the country’s capital.

Georges de la Rocherochard, who runs the “Vieux Paris d’Arcole” restaurant in central Paris with his wife Odette, said the new curfew could spell the end of their business too. At the very least, he said, the restrictions coupled with falling tourist numbers will mean having to lay off all eight of his staff.

“For 25 years we have been running our restaurant,” he told NBC News on Thursday. “We are all going to crash with this curfew.”

Hospitalizations and the number of patients in intensive care have soared in the past ten days. In Paris, ICU wards could hit 90 percent capacity by next week, officials say

In a nationally televised interview late Wednesday, French President Emmanuel Macron announced that the curfew beginning on Saturday night and lasting at least four weeks will keep millions of city-dwellers confined to their homes from 9 p.m. until 6 a.m.

Private gatherings of more than six people will also be restricted in Paris and eight other major cities, affecting close to one-third of the country’s 67 million population.

Some 12,000 police officers will also be deployed to enforce the new measures.

“We have to act. We need to put a brake on the spread of the virus,” Macron said while stressing that France still had not “lost control” of the virus despite being in a “worrying situation.”

The new strategy, which follows weeks of rising coronavirus cases, amounts to the government’s most robust attempt to battle the pandemic since it eased lockdown rules after the height of the crisis last spring.

Since then, the French government has joined other European leaders in trying to stake out a middle ground that will allow it to arrest the disease’s spread while preserving the economy.

The International Monetary Fund predicted in June that France’s economy could contract by nearly 10 percent in 2020.

However, Macron said a second full national lockdown would be “disproportionate.”

Under the new rules, businesses and schools can remain open during the day. But those found violating the rules without special permission would be fined as much as 135 euros ($160).

Businesses affected by the new rules would also be entitled to state aid, the president said.

But France’s second wave is not exactly like its first — both in terms of the dynamics of the disease’s effect on the population and the public’s reaction.

New cases of the disease have risen sharply in recent weeks, regularly reaching more than 20,000 new cases per day — levels far higher than were seen during the height of the crisis in the spring.

But hospitalizations and deaths initially lagged behind, puzzling doctors and policymakers.

The French public has also become increasingly impatient, like others around the world, suffering from “Covid fatigue.”

“This delusional curfew may be the last straw that will break the camel’s back with anger,” wrote a French academic René Chiche on Twitter on Thursday, decrying the new rules. While others asked for carve-out exemptions for theaters, cinemas and leisure.

French opposition politicians have also openly criticized the escalating lockdown measures, with some businesses in southern France remaining open in defiance of the rules, they say to protect livelihoods.

Elsewhere in Europe, nations are closing schools and shuttering bars, as authorities face the nightmare scenario of a Covid resurgence over winter.

Most European governments eased lockdown measures over the summer to start reviving economies battered by the first wave of the pandemic but now countries including Germany, the Netherlands and U.K. are facing deadly surges.

Even Pope Francis was subject to new coronavirus rules this week around social distancing at the Vatican, while Portuguese soccer star Cristiano Ronaldo worried fans when he tested positive for the virus on Tuesday.

In the U.S., with the world’s highest number of confirmed infections, 22 states have so far in October set records for increases in new cases. But deaths are trending downward and have averaged 700 a day over the last week.

Matthew Mulligan is a reporter for NBC News’ Social Newsgathering team based in London.

Adela Suliman is a London-based writer and reporter for NBC News Digital focusing on international news, in particular China. She has reported from the Middle East, Europe and Asia.