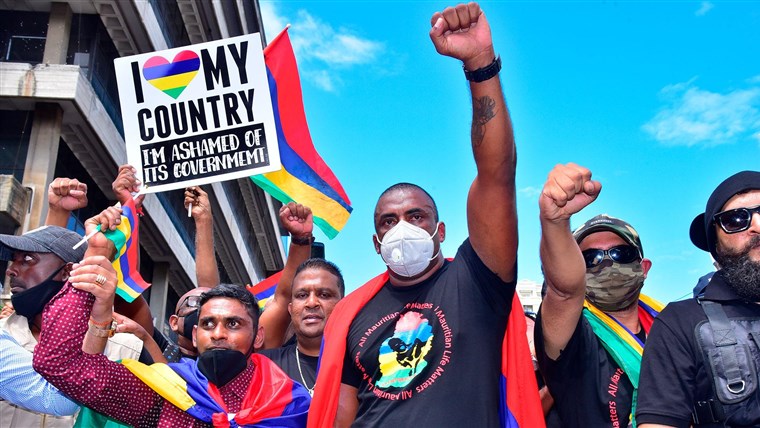 FLOREAL, Mauritius — The bodies of whales, turtles and other sea creatures have washed up on the shores of Mauritius, five weeks after a ship carrying thousands of tons of oil ran aground off the Indian Ocean Island.

Fishermen told NBC News they had found melon-headed whales near the spot where the Japanese-owned MV Wakashio crashed into the Point D-Esny reef off the tiny nation’s southeast coast July 25. The vessel began spilling oil on Aug. 6 and broke into two parts 11 days later. It was deliberately sunk Monday.

“I know the spill is responsible for their deaths,” Yannick Fine, 33, said, adding that some of the whales were pregnant as it was the season for them to breed and nurse their young.

“They used to frolic next to my boat,” he added. “Now they are dead. I’ve seen their mouths covered in oil, I know the spill is responsible for their deaths.”

Stephan Gua, a member of the Rezistans ek Alternativ activist group, said that he and other members had seen dead creatures floating in the water earlier this week. Others found alive had “blood around their mouths,” he added.

Pictures shared on social media and published in the local press show the whales’ mutilated bodies, some with blackened mouths. Other reports said sea turtles, fish and crabs that have been found dead across the country’s shoreline.

“It’s devastating and these deaths are only the beginning,” said Vassen Kauppaymuthoo, an oceanographer and managing director of the private company Delphinium Ltd.

“The situation is going to get progressively worse. We’re only seeing the tip of the iceberg,” he said, adding that many of the dead animals “would have been eaten by sharks or sunk to the bottom of the sea.”

Shark bites seen on some of the whale bodies indicated that they had been weakened by pollution, he said. “They must have suffered for a long time,” he said.

He added that it was “very difficult to think that something other than the oil spill” and the scuttling of the MV Wakashio could have caused their deaths.

The ship was carrying an estimated 4,000 metric tons of oil, 3,800 tons of very low sulphur fuel oil and 200 tons of diesel when it ran aground, the owner Tokyo-Mitsui O.S.K. Lines Ltd said in a statement earlier this month.

While the government said it was able to pump much of the fuel out and onto smaller tankers, some gushed from cracks in the ship, streaking the island’s turquoise water and threatening its coral reefs, protected lagoons and shoreline — vital for the nation’s main industry, tourism.

More than 880 metric tons of oily waste were collected at 14 sites, according to a United Nations report.

Hundreds of volunteers also joined citizen-led efforts to contain the spill, which U.N. satellites revealed had “heavily affected” more than 18 miles of the tiny nation’s shoreline.

The captain and first officer were arrested on Aug. 18 and charged with endangering safe navigation of the ship, which broke into two parts and was deliberately sunk by Mauritius’ government Monday.

The decision was condemned by Greenpeace which has called for investigations into the way the ship has been handled.

“Given how fast the decision was made between breaking of the ship and the start of towing we find it highly unlikely that any and all polluting content was removed,” the organization said in an open letter Monday.

The oceanographer Kauppaymuthoo said that it was “very difficult to think that something other than the oil spill and scuttling,” could have caused the deaths of animals found on the coastline.

However, Mauritius’ Minister of Fisheries Sudheer Maudhoo disagreed with that assessment, telling a press conference Wednesday that he had been informed that the deaths were not linked to the MV Wakashio.

NBC News has independently and repeatedly approached the government for comment.

Autopsies on some of the creatures are being carried out and many are suspicious of the government’s assessment, including Carina Gounden, a member of Aret Kokin Nu Laplaz, an environmental association of citizens and nongovernmental organizations on the island.

“They are insulting our intelligence,” she said, adding that the government had been “too hasty” to conclude there was no link between the ship and the animal deaths.

“I have talked to people across the coast,” she said. “They’re saying this is definitely abnormal.”

She added that the government had not been transparent enough about its response.

“In Mauritius, there’s a feeling that not everything has been told to us,” she said. “That there’s a cover-up.”

Kauppaymuthoo agreed that authorities had downplayed the severity of the situation.

“There’s a lack of transparency and coordination,” he said. “We need a smooth and efficient recovery. I’d recommend getting scientists together to form an independent scientific body.

“The more time we lose, the greater the impact on the environment and we need to be prepared for further horrific events to come,” he added.