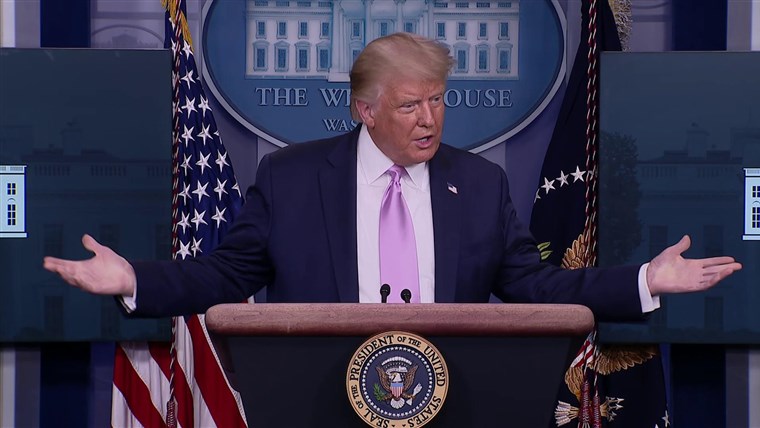 BERLIN — Thousands of protesters, some waving flags with the symbol of the QAnon conspiracy movement, gathered in the German capital Berlin on Saturday to demonstrate against social restrictions in place due to the coronavirus pandemic.

Some carried signs reading “Stop the corona lies” and “End the plandemic immediately,” suggesting that COVID-19 was an artificial, planned event.

Others carried the black, white and red Reich flag, a symbol of “Reich citizens” who reject the legitimacy of the modern German state and have been linked to right-wing and antisemitic positions.

Berlin’s regional government had sought to ban the protest, citing similar rallies earlier this month where rules intended to stop the virus being spread weren’t respected.

But protest organizers successfully appealed the decision, though a court ordered them to ensure social distancing — a measure that Berlin police said wasn’t being enforced Saturday, after demonstrators started marching around 9 a.m. local time (12 a.m. ET).

More than 3,000 police officers were on the streets of central Berlin and said a water cannon would be used if necessary, as they braced for violence as demonstrators left from the Brandenburg Gate.

“These are people who are opposed to corona (measures), so we assume they have in recent months exercised absolutely no caution,” Berlin police president Barbara Slowik said ahead of the protest.

The force later tweeted that they had approached the demonstration leaders and told them that the march would be dissolved, as demonstrators had been repeatedly asked to adhere to social distancing rules and had not done so.

However, a rally near the city’s famous Victory Column would be allowed to proceed, if people respected the rules, a police spokesperson told NBC News by telephone.

Activists had called on social media followers across Europe to join them in the German capital on Saturday.

Among them were followers of QAnon, a convoluted conspiracy theory that centers around an anonymous source, Q.

Q claims to be a high-ranking U.S. military official trying to tell the world about a secret battle being waged by President Donald Trump against a pedophile ring, filled with a cabal of celebrities and political elites who have covertly been running the U.S. government for decades.

There is no evidence to support these claims, but it has gained traction on fringe internet messaging boards and started to show-up in the real world, on billboards and rallies like the one in Berlin.

A smaller anti-lockdown protest also took place in London’s Trafalgar Square on Saturday. Demonstrators shouted that coronavirus was a hoax and demanded an end to lockdown restrictions. Some carried banners saying “Fake News,” or “Masks are Muzzles.”

Over 40,000 people have died in Britain from COVID-19, the highest death rate in Europe.

Meanwhile, in Paris around 200 anti-mask activists gathered, holding placards reading: “No to the health dictatorship.”

Germany, however, has managed the coronavirus crisis better than many of its European counterparts, with rigorous testing believed to have helped keep down infections and deaths.

The European country has reported just under 10,000 deaths in total, according to data on Saturday from Johns Hopkins University. But new daily infections have accelerated in recent weeks.

On Friday, Chancellor Angela Merkel urged citizens to keep up their guard against the virus.

“This is a serious matter, as serious as it’s ever been, and you need to carry on taking it seriously,” she said.

Matt Bradley and Carlo Angerer reported from Berlin and Adela Suliman from London.

Carlo Angerer is a multimedia producer and reporter based in Mainz, Germany.