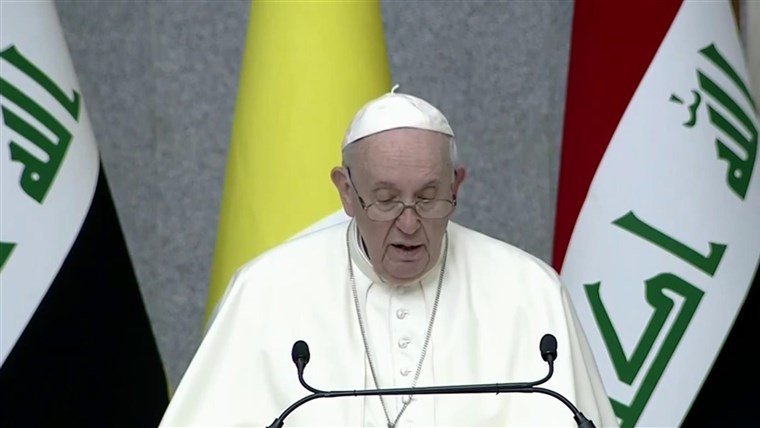 Pope Francis held a historic meeting with a senior Shiite cleric in Iraq Saturday and appealed for greater interfaith unity visiting the birthplace of Abraham, as part of his whirlwind tour of the Middle Eastern country.

Francis, 84, met with Grand Ayatollah Ali al-Sistani, 90, at his home in the holy city of Najaf in central Iraq, where the two elderly men of faith provided a highly symbolic moment of tolerance, for a country scarred by sectarianism and violence.

“Religious and spiritual leadership must play a big role to put a stop to tragedy,” Sistani, the spiritual leader of millions of Shiite Muslims, said in a statement after the meeting.

He also called for “wisdom” to prevail and “erase the language of war.”

The pontiff met with the ascetic, and somewhat reclusive spiritual figure, for 45 minutes at Sistani’s humble home, along a narrow alleyway near the golden-domed Imam Ali shrine.

An official Vatican photo showed Sistani in his traditional black Shiite robe and turban sitting across from Francis, in his white cassock.

With an almost mythical stature among millions of followers, Sistani rarely appears in public but has intervened at critical junctures in Iraq’s history. His edicts sent Iraqis to polls in 2005 and rallied hundreds of thousands to fight against ISIS in 2014.

“The Holy Father stressed the importance of collaboration and friendship between religious communities,” the Vatican said in a statement, following the visit.

The meeting was an opportunity for the Pope to “thank” Sistani who had “raised his voice in defense of the weakest and most persecuted,” during the violence of recent years, the statement said.

After the meeting, Francis travelled to the desert plain of Ur in southern Iraq, revered as the birthplace of Abraham — the patriarch of monotheism and a unifying prophet in Islam, Christianity and Judaism.

Praising young Muslims for helping Christians repair their churches, Francis stressed the importance of interfaith coexistence and fraternity, in his speech.

“From this place, where faith was born, from the land of our father Abraham, let us affirm that God is merciful,” he said. “Hostility, extremism and violence are not born of a religious heart: they are betrayals of religion,” he added.

With the desert wind blowing, Francis sat alongside Muslim, Christian and Yazidi leaders and spoke within sight of the ancient archaeological ruins of the 4,000 year-old city.

The Pope’s trip which began on Friday, will last four days. It comes amid a second wave of coronavirus cases in Iraq and a spate of rocket attacks, as a bitter U.S.-Iran rivalry plays out on Iraqi soil.

Greeted with white doves, folk dances, an honor guard and colorful street graffiti, Francis’ visit boosts national pride and provides a rare opportunity for Iraqis to be at the center of a positive news story. The oil-rich country is still struggling after the U.S.-led invasion in 2003 plunged it into chaos.

Francis said he was also making the trip to show solidarity with Iraq’s Christian community — one of the oldest in the world — which has fallen to about 300,000 from about 1.5 million 20 years ago.

“I’m more than happy for the visit of the Pope,” Iraqi Christian Feras Ramzi, 46, told NBC News. “This is a message from the Vatican that it won’t forget its sons and daughters in Iraq.”

“The Pope came to Iraq offering peace,” he said. “Peace is the language that all Iraqis should speak, no matter if they are Christians, Muslims or from other religions.”

Flying back to Baghdad later on Saturday, Francis is expected to say mass at a central cathedral. He will then travel north to Mosul on Sunday, a former stronghold of the Islamic State.

Iraqi President Barham Salih thanked Francis for making the first-ever papal visit to Iraq, despite some calls for him to postpone the trip.

“Iraq has been through tough times,” Salih told NBC News on Friday. “He has come to help us get to a better day.”