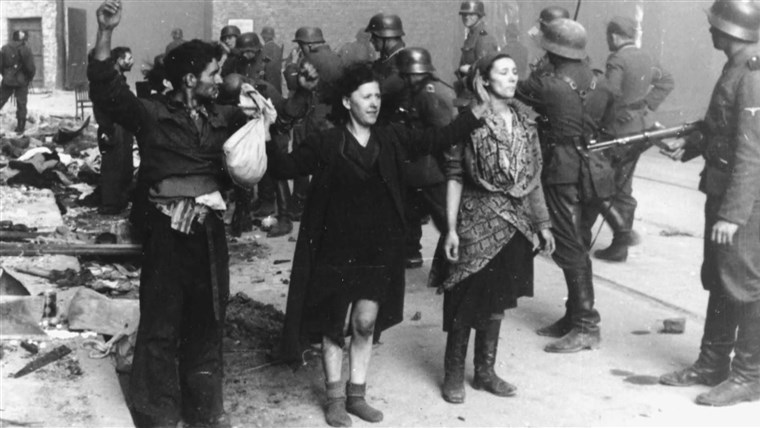 A nationwide survey released Wednesday shows a “worrying lack of basic Holocaust knowledge” among adults under 40, including over 1 in 10 respondents who did not recall ever having heard the word “Holocaust” before.

The survey, touted as the first 50-state survey of Holocaust knowledge among millennials and Generation Z, showed that many respondents were unclear about the basic facts of the genocide. Sixty-three percent of those surveyed did not know that 6 million Jews were murdered in the Holocaust, and over half of those thought the death toll was fewer than 2 million. Over 40,000 concentration camps and ghettos were established during World War II, but nearly half of U.S. respondents could not name a single one.

“The most important lesson is that we can’t lose any more time,” said Greg Schneider, executive vice president of the Conference on Jewish Material Claims Against Germany, which commissioned the study. “If we let these trends continue for another generation, the crucial lessons from this terrible part of history could be lost.”

The Holocaust was the state-sponsored mass persecution and murder of millions of people under the Nazi regime and its collaborators. The genocide campaign targeted groups believed by Adolf Hitler’s government to be biologically inferior because of anti-Semitism, homophobia or the like. Using tactics like gas wagons, concentration camps and firing squads, the regime targeted the Jewish people in particular for annihilation and killed nearly 2 of every 3 European Jews by 1945.

The lack of Holocaust knowledge demonstrated in the study is “shocking” and “saddening,” said the Claims Conference, a nonprofit that works to secure material compensation for Holocaust survivors. The survey’s data came from 11,000 interviews across the country, conducted by phone and online with a random, demographically representative sample of respondents ages 18 to 39. It was led by a task force that included Holocaust survivors, historians and experts from museums, educational institutions and nonprofits.

The findings raise concerns not just about Holocaust ignorance, but also about Holocaust denial. Just 90 percent of respondents said they believed that the Holocaust happened. Seven percent were not sure, and 3 percent denied that it happened. One of the most disturbing revelations, the survey noted, is that 11 percent of respondents believe Jews caused the Holocaust. The number climbs to 19 percent in New York, the state with the largest Jewish population.

“There is no doubt that Holocaust denial is a form of anti-Semitism,” said Deborah Lipstadt, a professor of modern Jewish history and Holocaust studies at Emory University in Atlanta. “And when we fail to actively remember the facts of what happened, we risk a situation where prejudice and anti-Semitism will encroach on those facts.”

Part of the problem may be social media, experts say. The survey shows that about half of millennial and Gen Z respondents have seen Holocaust denial or distortion posts online. Fifty-six percent reported having seen Nazi symbols on social media or in their communities within the past five years.

The findings come on the heels of the Claims Conference’s #NoDenyingIt digital campaign, which used photos and videos of Holocaust survivors to appeal directly to Facebook to remove Holocaust denial posts. Facebook’s Community Standards prohibit hate speech but do not consider Holocaust denial part of that category, despite opposite messaging from other institutions, like Congress and the State Department.

“We take down any post that celebrates, defends, or attempts to justify the Holocaust,” a Facebook spokesperson said in an email. “The same goes for any content that mocks Holocaust victims, accuses victims of lying about the atrocities, spews hate, or advocates for violence against Jewish people in any way.”

In countries where Holocaust denial is illegal, such as Germany, France and Poland, Facebook takes steps to restrict access in accordance with the law, the spokesperson said.

“We know many people strongly disagree with our position — and we respect that,” the spokesperson said. “It’s really important for us to engage on these issues and hear from people to understand their concerns. We have a team that is dedicated to developing and reviewing our policies and we welcome collaboration with industry, experts and other groups to ensure we’re getting it right.”

The social media debate is part of a larger reckoning over the Holocaust’s place in American memory. With fewer living Holocaust survivors who can serve as eyewitnesses to the genocide and with a new wave of anti-Semitism in the U.S. and Europe, some worry that the seven-decade rallying cry “never forget” is being forgotten. Disturbingly, the majority of adults in the poll believed that something like the Holocaust could happen again, the survey found.

“When you learn the history of the Holocaust, you are not simply learning about the past,” Lipstadt said. “These lessons remain relevant today in order to understand not only anti-Semitism, but also all the other ‘isms’ of society. There is real danger to letting them fade.”

“Holocaust education is extremely local,” Schneider said. “Teachers are the heroes in this story, particularly this year, where the challenges are beyond imaginable. In general, teachers can be overwhelmed in classrooms with the content and the lack of time and resources. Really, what we’re trying to do is make sure proper training and resources and support is available to teachers across the country.”

Eyewitness testimony is the most powerful tool available to educators, said Gretchen Skidmore, director of education initiatives at the Holocaust Memorial Museum.

“There is nothing that can replace the stories of survivors in Holocaust education,” Skidmore said. “It is very meaningful when you see a student listening to a survivor, hearing how individuals responded to this watershed event in human history and thinking not only what would I have done but what will I do with the choices I face today.”

Still, educators are preparing for the day when there are no more living Holocaust survivors to join the classroom, including efforts to digitize their stories.

“The fact that that recorded testimony exists and is being collected and maintained is a really useful tool now, and it will continue to be a useful tool in the future,” said Ariel Behrman, who heads the Anti-Defamation League’s Echoes & Reflections program, a Holocaust education program in partnership with the USC Shoah Foundation at the University of Southern California and Yad Vashem, Israel’s official memorial to the victims of the Holocaust.

The Echoes & Reflections program has reached over 14,250 schools and 72,000 teachers at no cost to educators, according to its website.

“The interest is there, without a doubt,” Behrman said. “Teachers really do seek us out. There are a lot of things students can learn from the past and from those who experienced the Holocaust. There are also contemporary connections to be made, and students can apply what they learned to their world today.”

These days, Holocaust education is about teaching more than just facts, Behrman said. Last week, Echoes & Reflections released a national survey of 1,500 college students, which found that high school Holocaust education was associated with students’ being more empathetic, tolerant and socially responsible. Students with Holocaust education reported themselves to be more likely to stand up to negative stereotyping, for example, and more willing to challenge incorrect or biased information.

“We’ve seen it time and time again,” Schneider said. “Education is the best way to prevent ignorance and to prevent hate.”