Taliban spokesman says U.S. will not be harmed from Afghan soil 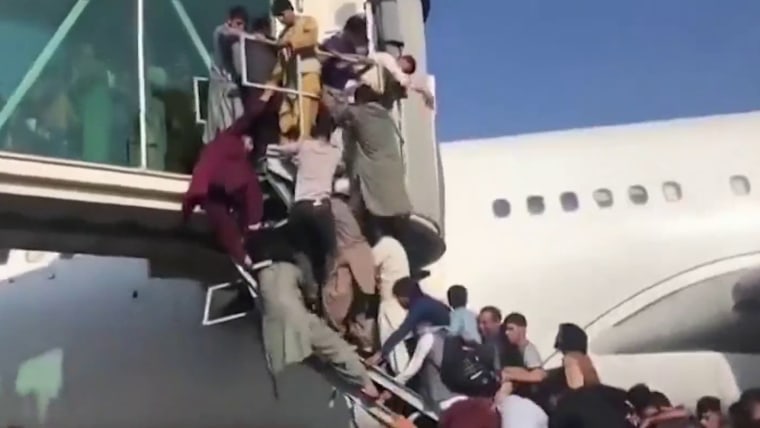 KABUL, Afghanistan — The Taliban sought Tuesday to calm fears in the West, particularly in the U.S., that their return to power would provide a safe harbor for terrorists and lead to backslide on women’s rights.

“I would like to assure the international community, including the U.S., that nobody will be harmed in Afghanistan,” spokesman Zabihullah Mujahid said at a news conference in Kabul, according to an Al Jazeera translation. “You will not be harmed from our soil.”

While the Taliban have made similar promises in the past, Mujahid’s remarks were a clear indication of the movement’s efforts to reach out to the international community and encourage international engagement with the group.

The Taliban are trying to consolidate their control over the country after their lightning-fast takeover as U.S. troops withdrew while conveying to the world that they have moderated some of their ultraconservative Islamic views.

“We don’t have any grudges,” Mujahid said, adding that the Taliban said they will ensure the security of foreign embassies, international organizations and aid agencies operating in Afghanistan.

He offered the international community and Afghans some of the first glimpses of what a Taliban government might look like, saying the group was committed to the rights of women within the framework of Shariah law and would allow them to work and study.

Mujahid reassured those who had fought against the Taliban, as well as all interpreters and contractors, that they had been “pardoned.” He said he did not want Afghan youths to leave, describing them as the country’s “assets.”

He also insisted that the Taliban welcome free and independent media, adding that journalists will be allowed to critique their work.

“Our nation is a Muslim nation, whether 20 years ago or now,” he said. “But when it comes to experience, maturity, vision, there is a huge difference between us in comparison to 20 years ago.”

The statements will be greeted with skepticism by some Afghans, who have come to expect that the militants will bar women from public activities. They have already cracked down brutally in some communities and cities they have conquered.

While Mujahid’s tone was conciliatory, he also congratulated the nation for “emancipating” Afghanistan and expelling “foreigners” after a 20-year struggle.

Kept out in the wilderness for two decades after being toppled by a U.S.-led invasion, the Taliban have swept back into cities and villages across Afghanistan to take power less than two weeks after they escalated their insurgent military campaign as U.S. troops withdrew.

The U.S. invaded in the wake of the 9/11 terrorist attacks in 2001, overthrowing the hard-line Taliban regime that had sheltered Al Qaeda leader Osama bin Laden, the architect of the 9/11 attacks. Two decades on, the militants are back in control, and the U.S. is scrambling for the exits.

Despite bipartisan criticism of the U.S. withdrawal at home, a resolute President Joe Biden said in an address Monday that he stood “squarely behind” his decision to pull out American forces.

Former Defense Secretary and CIA Director Leon Panetta told NBC News’ Andrea Mitchell on Tuesday that there was no question that the Taliban will provide a safe haven for Al Qaeda, the Islamic State, or ISIS, and other terrorist groups.

“This is a national security threat,” Panetta said.

National security adviser Jake Sullivan told reporters at the White House on Tuesday that it was “premature” to answer whether the Biden administration recognizes the Taliban as a legitimate governing power.

“Ultimately, going to be up to the Taliban to show the rest of the world who they are and how they intend to proceed,” Sullivan said. “The track record has not been good.”

He said the administration has been working with the group and believes the Taliban’s assurance of protection for civilians’ passage to the airport could extend until the end of the month. Sullivan would not answer, however, whether the U.S. is prepared to stay past Aug. 31 to ensure that all Americans are out of the country.

“I’m not going to comment on hypotheticals. What I’m going to do is stay focused on the task at hand, which is getting as many people out as rapidly as possible. We will take that day by day,” Sullivan said.

State Department Press Secretary Ned Price advised Americans in Afghanistan to “shelter in place” unless otherwise communicated with by the U.S. Embassy.

“We’re doing everything we possibly can in a very fluid environment,” Price said.

Officials have not said how many Americans remain throughout Afghanistan as evacuation efforts continue. The Defense Department hopes to increase efforts until at least one aircraft an hour is flying out of Hamid Karzai International Airport in Kabul, said Army Maj. Gen. Hank Taylor, the Joint Staff’s deputy director of regional operations.

Marine Gen. Frank McKenzie, head of U.S. Central Command, visited the airport Tuesday, describing it in a statement as secure and “open to civilian air traffic.”

“In meetings with Taliban senior leaders in Doha on Sunday, I cautioned them against interference in our evacuation, and made it clear to them that any attack would be met with overwhelming force in the defense of our forces,” McKenzie said.

While the militants may be declaring victory, it remains unclear how many countries would recognize a Taliban government. The U.S. special envoy to Afghanistan, Zalmay Khalilzad, said last week that a government imposed by force would be a “pariah state.” But China and Russia said Monday that they are willing to engage with the Taliban.

A Taliban official announced a general “amnesty” for all in Afghanistan earlier Tuesday and urged women to join the government. The official, Enamullah Samangani, made the comments on Afghan state television, which the militants appear to control, referring to Afghanistan as the Islamic Emirate — their name for the country.

Another possible indication of the Taliban’s intentions and sensitives about their public image came when a spokesman for the group was interviewed by a female reporter on Afghanistan’s largest private broadcaster, TOLO TV — which would not have been possible during the previous Taliban regime.

The militants were clearly intent on taking control of the capital Tuesday, and checkpoints dotted Kabul’s streets. Some markets, shops and offices also opened, and there were no reports of violence or fighting in the city of 5 million people. The Taliban had ordered their fighters against entering houses without permission in Kabul to protect “life, property and honor.”

In the city of Herat, about 400 miles west of Kabul, a resident said the number of people going to the mosque had jumped since the Taliban arrived Friday.

“There are more people in the mosque than in the streets these days,” he said on condition of anonymity because he was afraid of retribution from the Taliban. “People are afraid.”

The Taliban had also announced that girls would have to wear hijabs to attend school, he said.

The developments followed chaos in the capital after the swift departure of President Ashraf Ghani and the Taliban takeover of Kabul over the weekend.

Panicked Afghans mobbed the airport Monday in an attempt to get flights out of the country as the U.S. and other governments rushed to evacuate their citizens. Videos showed scores of Afghans running alongside a C-17 and others actually holding on to the craft as it taxied.

The crew decided to depart amid the chaos as it faced a “rapidly deteriorating security situation,” and a body has since been discovered on the aircraft, according to a statement from the Air Force Tuesday.

“In addition to videos seen online and in press reports, human remains were discovered in the wheel well of the C-17 after it landed at Al Udeid Air Base, Qatar,” the statement said. “The aircraft is currently impounded to provide time to collect the remains and inspect the aircraft before it is returned to flying status.”

Meanwhile, Afghan women have been raising concerns about their futures under a Taliban government, which had previously stripped them of almost all their rights.

A small group of women took to the streets Tuesday for a peaceful gathering in Kabul. Wearing hijabs, they held up signs that demanded work, education and political participation for women.

Brave Afghan women protesting for their rights in Kabul. “Work, education and political participation is every woman’s right” pic.twitter.com/BEW4aXNjEp

When the group ruled Afghanistan from 1996 to 2001, they enacted laws that made women and girls almost invisible in public life. They could not appear on television and were not heard on the radio, their rights having been all but eliminated in most areas of life, including school attendance.

“We hope that the Taliban will focus on improving the security situation in Afghanistan and that there will be a change from the Taliban who did not allow girls to go to school in the past,” Aminura, a resident of Kabul, told The Associated Press.