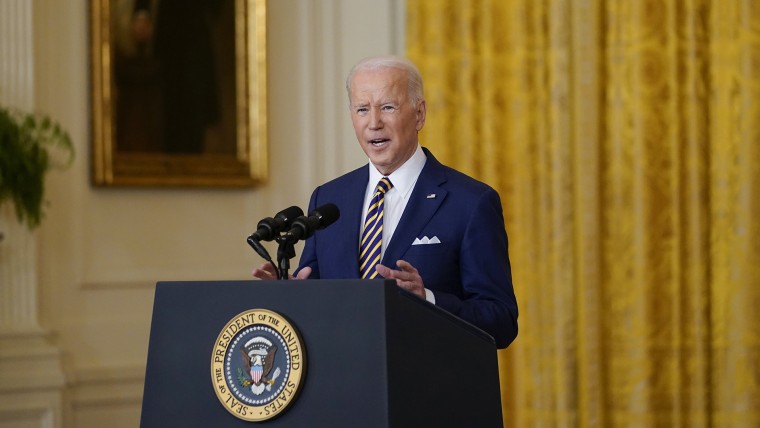 President Joe Biden predicted Wednesday that Russia will invade Ukraine, just as the United States launched a fresh effort to resolve the standoff and Moscow continued to mass troops on its neighbor’s doorstep.

“My guess is he will move in, he has to do something,” said Biden during a news conference marking his first year in office, referring to Russian President Vladimir Putin and Ukraine.

The declaration from Biden was striking given the escalating tensions there and the continued efforts by America and its allies to find a diplomatic solution.

Biden said Putin “will be held accountable” and has “never have seen sanctions like the ones I promised will be imposed” if Russia makes further moves against Ukraine. He added the U.S. would increase its troop levels in the region, including in Poland, keeping with obligations under the NATO treaty.

But Biden appeared to hedge his threats, distinguishing between a “minor incursion” and a full-blown attack.

“And it depends on what it does. It’s one thing if it’s a minor incursion and we end up having to fight about what to do and not do,” Biden added.

A senior administration official told reporters in a telephone briefing Wednesday night evening that the United States was prepared to impose sweeping sanctions on Russia regardless of the amount of territory seized in a possible invasion of Ukraine.

If conventional military forces are acquiring land in Ukraine, the U.S. would consider that an invasion, regardlesss of the size, the official said.

If Putin invades, “This is the most consequential thing that has happened in the world since World War II,” said Biden.

Biden offered some of his thoughts on Putin’s thinking.

“I think it matters what side of the bed he gets up on in the morning as to what he’s going to do,” he added.

Secretary of State Antony Blinken was in Kyiv this week to meet with Ukrainian President Volodymyr Zelenskyy in a hastily arranged diplomatic mission that signaled the urgency of the crisis.

Blinken was also set to meet with Russian Foreign Minister Sergey Lavrov in Geneva on Friday, even after a flurry of negotiations last week produced no breakthrough and lowered hopes for de-escalation.

With Europe facing one of its greatest security crises since the Cold War, Washington’s warning that a Russian attack could come “at any point” was ringing through the winter air as Blinken arrived on the continent early Wednesday.

Speaking to diplomats at the U.S. embassy in Kyiv, Blinken echoed those concerns as he warned that Moscow’s troop buildup would allow Putin to launch an attack “on very short notice.”

Biden’s top diplomat added that he strongly hopes Russia can stick to a peaceful path, Reuters reported. The Russian buildup, he said, was taking place with “no provocation, no reason,” according to the agency.

In a later meeting with Zelenskyy, Blinken said that Ukraine faces an “unprecedented” threat. He reiterated Washington’s commitment to the country’s territorial integrity and repeated warnings that renewed Russian aggression would be met with “very severe consequences.”

During his time in Kyiv, Blinken will also meet with the employees of the U.S. embassy and their families to discuss efforts “to plan for contingencies,” should Russia choose to escalate further, the State Department said.

On Wednesday, a bipartisan group of senators briefed Biden on their trip to Ukraine this week to meet with Zelenskyy, which preceded Blinken’s visit.

“Democrats and Republicans must remain united on the urgent need to support Ukraine in defense of its sovereignty and pro-democratic aspirations,” Sen. Jeanne Shaheen, D-N.H., tweeted Wednesday. “Now we must find a path forward together that responds to those needs and holds Putin to account.”

After speaking with Biden on Wednesday morning, a group of GOP senators, some of whom participated in the weekend trip to Ukraine, accused the administration of not doing enough to deter Russia.

Sen. James Inhofe, R-Okla., the ranking member on the Senate Armed Service Committee, told reporters that the U.S. should quickly deliver additional aid and bolster Ukraine’s defenses. The Biden administration, he said, is “three months behind where they should be at this time.”

Sen. Rob Portman, R-Ohio, who led the trip to Ukraine with Shaheen, also said that in addition to imposing sanctions, the U.S. must let Russia know that it will provide additional military defenses and lethal weapons to Ukraine.

“That is the kind of deterrence that’s needed right now” in order to avoid an invasion into Ukraine and the destabilization of Europe, he said.

On Tuesday White House press secretary Jen Psaki said that an “extremely dangerous situation” is building along the Ukrainian border. “We believe we’re now at a stage where Russia could at any point launch an attack on Ukraine. I would say that’s more stark than we have been,” Psaki said during her daily press briefing.

Last week, the Biden administration said it had information that the Russian government is planning a “false-flag” operation to justify a fresh military incursion into its neighbor, after Russia annexed Crimea in 2014 and backed an ongoing separatist war with Ukrainian forces in the country’s East.

The growing alarm comes after inconclusive talks between Moscow and the West following Russia’s demands for security guarantees that the U.S. and its allies have consistently ruled out.

Russia amassed more than 100,000 troops along the Ukrainian border in recent months, prompting Western fears that Moscow is planning to invade. The Kremlin has steadfastly denied any such plan.

Adding to those fears, Russian forces and equipment continued to arrive in Belarus on Tuesday for what Moscow and Minsk have said is a planned joint military exercise next month. The former Soviet state is a staunch Moscow ally and borders Ukraine to the north.

A senior administration official called the arrival of Russian troops and equipment in Belarus “neither an exercise nor normal troop movement,” but “a show of strength” that could give a false pretext for a crisis.

“It’s a move that’s extremely dangerous,” the official said in a briefing ahead of Blinken’s visit. “We are now at a stage where Russia could at any point launch an attack on Ukraine.”

But Moscow remained defiant about the movements of its troops Wednesday, with the Russian embassy in Washington calling it a “sovereign right.”

“Once again we emphasize: Russia is not going to attack anyone,” the embassy said in a Facebook post.

The U.S. has warned Russia of dire economic consequences should it invade, and has sought to rally allies throughout Europe to present a strong and united front.

After his meetings with Zelenskyy and other senior Ukrainian officials, Blinken will continue to Berlin for talks with German and other European allies on Thursday.