Trump joins club of world leaders diagnosed with the coronavirus 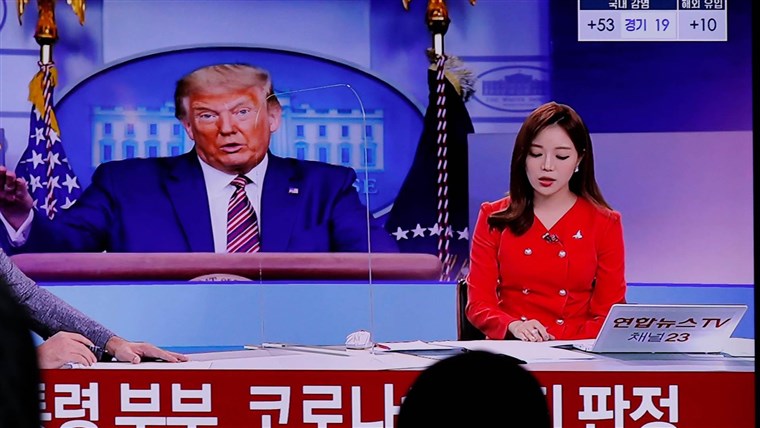 LONDON — Before news of President Donald Trump’s positive Covid-19 diagnosis reverberated around the globe, other world leaders and public figures had tested positive in the pandemic.

Here is a list of notables from around the world who have fallen sick during the public health crisis.

The Prime Minister of Britain initially announced that he had tested positive for coronavirus and was suffering “mild symptoms” on March 27. Then, on April 6, Johnson was rushed to a London hospital on the advice of his doctor before being placed in an intensive care unit for three nights. The 55-year-old leader received oxygen treatment but was not put on a ventilator.

He later said “the doctors had all sorts of arrangements for what to do if things went badly wrong,” and added his fears that it could have “gone either way.” Around the same time, Britain’s Health Minister Matt Hancock, leading the country’s pandemic response, also announced he had tested positive, plunging the country into further crisis. Both have now recovered but Britain remains the nation with Europe’s highest coronavirus death toll.

After downplaying the severity of the coronavirus pandemic for months, Brazil’s President announced in July that he had tested positive for Covid-19. He quickly shrugged-off the illness and said he felt well. The 65-year-old had previously said that his history as an athlete would protect him from the virus and that it would be nothing more than a “little flu.”

Bolsonaro also championed his use of hydroxychloroquine, an anti-malaria drug also favored by Donald Trump in the past — the drug has not been proven effective against Covid-19.

The beleaguered Belarusian president who is in the midst of a crackdown to hold on to his tenure in the former Soviet state, dismissed the world’s response to coronavirus as a type of “psychosis.” Lukashenko also said that vodka, saunas and tending to fields were the best remedy.

In July, he announced he had contracted Covid-19 but was asymptomatic.

Canadian Prime Minister Justin Trudeau’s wife, Sophie Gregoire Trudeau, tested positive for Covid-19 in March. Her husband did not contract the virus but did self-isolate for two weeks. Gregoire Trudeau had returned from a speaking engagement in London where she is thought to have picked up the disease. She said she had experienced the “uncomfortable symptoms of the virus.”

Queen Elizabeth II’s son and heir to the British throne Prince Charles tested positive for Covid-19 while his wife Camilla was negative. The Prince of Wales, 71, said he experienced only “mild symptoms.” He recovered after self-isolating at the royal Balmoral Estate in Scotland and went on to officiate the virtual opening of a field hospital in London for others suffering from coronavirus.

Another royal, Prince Albert II tested positive in March and appeared to be the first head of state who publicly said he had contracted the virus. The second child of Princess Grace — formerly Grace Kelly, an American movie star — and Prince Rainier of Monaco, Albert, 62, made a swift recovery after being confined to his home in the tiny but wealthy European state.

The Nigerian president’s chief of staff and influential longtime adviser Kyari died in April after contracting the coronavirus. Kyari, who was in his 70s and had underlying health conditions including diabetes, was the top adviser to President Muhammadu Buhari and was considered one of the most powerful men in the west African country.

A senior official in the European Union and the E.U.’s chief Brexit negotiator, Barnier tested positive for coronavirus in March. The French national said he was “in good spirits” and has since resumed the tricky task of negotiating Britain’s divorce from the European bloc.

The Honduran president announced in June that he had tested positive, along with two other aides. Hernandez said he was using an experimental and unproven treatment combining drugs, including zinc. He was briefly hospitalized and released. Hernandez has since called for the equitable distribution of any Covid-19 vaccine at the recent United Nations General Assembly.

In September, the world passed the grim milestone of over one million coronavirus deaths, as the virus continues to spread, according to data from Johns Hopkins University.