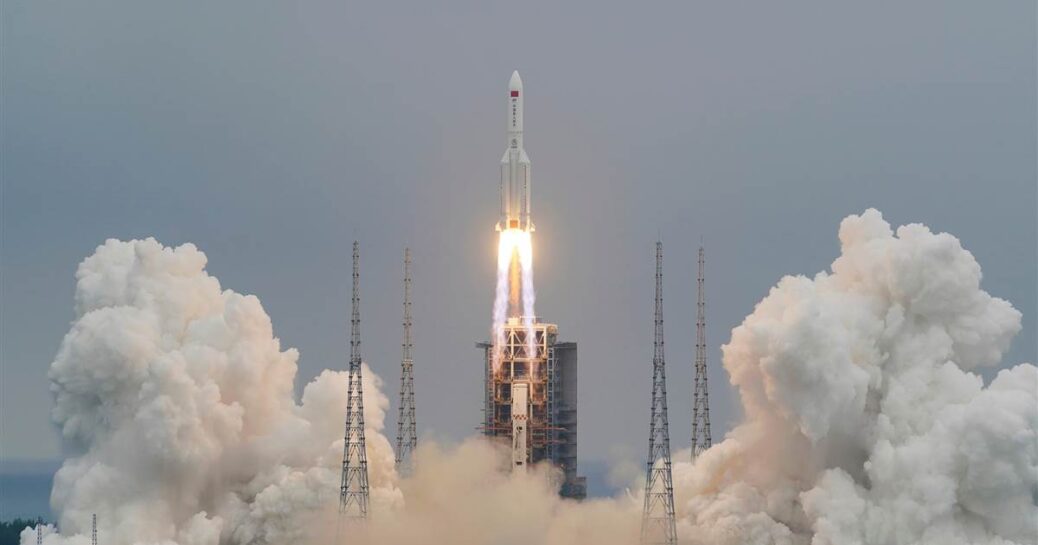 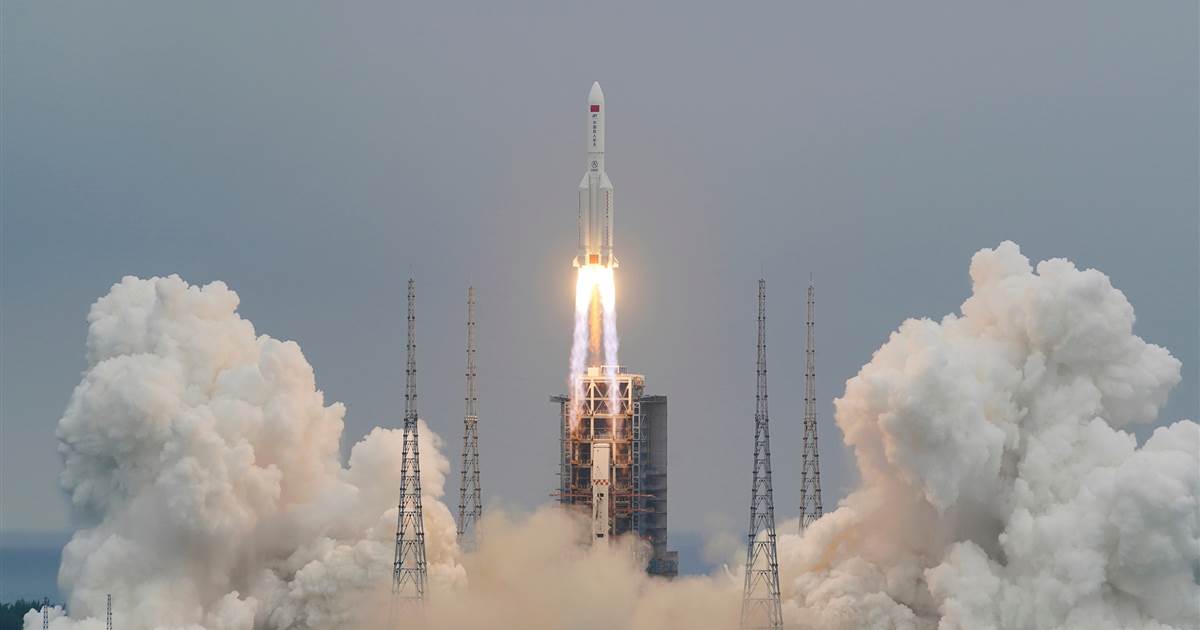 It’s 10-stories tall and twice as heavy as a school bus, and it’s set to crash back to Earth this weekend — but no one is quite sure where or when.

A piece of a rocket launched by China in late April is expected to re-enter Earth’s atmosphere sometime late Saturday or early Sunday, according to experts and officials.

The 98-foot-long, 20-ton section of China’s Long March 5B rocket is tumbling through space in an uncontrolled orbit at 18,000 miles per hour after blasting off last month carrying part of the country’s new space station.

And while it’s common for pieces of rockets to fall back to Earth, this particular section has drawn concern because its lack of control means experts aren’t sure where it will come down.

Scientists say the risk of it killing anyone after it re-enters the planet’s atmosphere is small but not impossible: There is a tiny chance the debris could hit New York, Los Angeles, Madrid, Rio de Janeiro, the Nigerian capital of Abuja or Beijing. It will more likely land in an ocean or the wilderness.

“The probability of causing harm to aviation activities or activities on the ground are extremely low.” he said.

Meanwhile, the Chinese state-run Global Times newspaper said it would likely splash down in the sea.

The California-based Aerospace Corporation puts the chance of that happening at 75 percent. It says between 60 and 80 percent of the rocket remnant will likely burn up — but the rest will likely hit ground or water.

The risk is low but experts say the re-entry is part of a bigger problem that’s only going to get worse, as countries launch more rockets that could either cause damage by crashing back to Earth — or collide and create a cloud of space debris that could imperil other satellites or astronauts.

“This is like playing the lottery,” said Don Pollacco, a physics professor at England’s University of Warwick, who tracks space debris. “You have got a big lump of metal in space that’s in a declining orbit because it’s rubbing up against the atmosphere.”

“It will hit the atmosphere, bounce around a bit and it’s correct to say most of the planet is covered by water, so that’s where it will likely land,” he added.

The U.S. Space Command is tracking the Chinese debris — along with 27,000 other bits of space junk. Secretary of Defense Lloyd Austin assured reporters Thursday that the United States has no plans to shoot it down.

“We have the capability to do a lot of things, but we don’t have a plan to shoot it down,” he said in a briefing. “We’re hopeful that it will land in a place where it won’t harm anyone, hopefully in the ocean or someplace like that.”

The latest prediction from the Aerospace Corporation is that the rocket will crash down in Sudan at around 11:45 p.m. ET Saturday.

But its confidence interval is plus or minus 16 hours — leaving open a huge window of the planet where the object might land. There are also other variables.

“At that kind of altitude, we don’t really know very much about the atmosphere, mainly because it changes all the time,” Pollacco said. “If there’s a big flare from the sun, that makes the atmosphere expand out a bit — plus the rocket is a funny shape.”

Some experts say this is the latest example of China being irresponsible with its spacecraft.

Large rockets like this are not usually meant to reach orbit, rather crashing down into water before they get that high. Alternatively, a rocket can use its engines to control its descent into the sea or an unpopulated area.

That hasn’t happened this time.

A year ago, another Chinese rocket piece that had carried another part for the space station tumbled uncontrolled over New York and Los Angeles before smashing into Ivory Coast, in West Africa, where it damaged buildings but caused no reported injuries.

Last month’s launch was the first of 11 such missions planned by China to build the new space station.

Though the U.S. and other Western countries don’t have the same record of letting their rockets crash down uncontrollably, there are other concerns when it comes to their approaches to orbital spaceflight, according to Pollacco at the University of Warwick.

He said that many countries often “park their debris” at lower orbits, leaving parts of rockets up in space where they can sit for years.

“We try to track them but we can’t control them,” he said. “So we’re sitting here waiting for a collision to happen — we too are playing a lottery.”