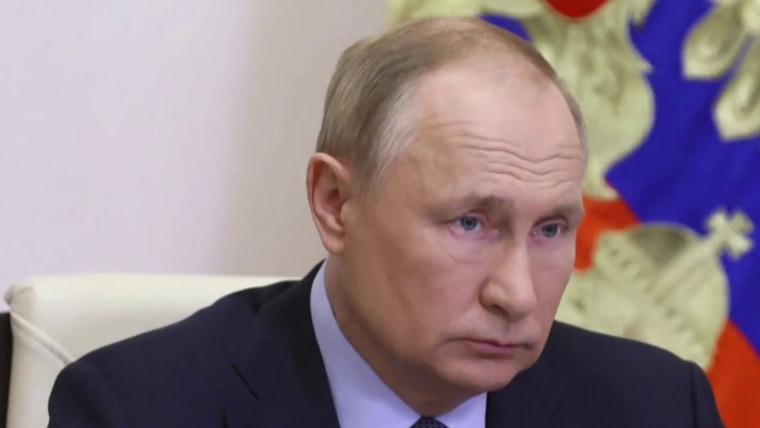 WASHINGTON — President Joe Biden will make it clear to Russian President Vladimir Putin that there would be “very real costs” should Russia take military action against Ukraine when the two leaders meet on a video call Tuesday, a senior administration official said.

During the call, which comes as Russia has deployed more than 90,000 combat troops along Ukraine’s border, Biden will lay out a range of actions the U.S. and its European allies would take, including additional sanctions, should Russia invade Ukraine.

The official said that the U.S. believes Russia is putting in place the capacity to engage in military action but is unclear whether Putin has decided to carry out the plans. Along with the military buildup, Russia has also been significantly ramping up a misinformation campaign to make Ukraine appear as the aggressor. Tuesday’s call will be the first between Biden and Putin since July.

The U.S. and European allies have been in “intensive discussions” about what they would collectively do if Russia invades Ukraine, including “substantial economic countermeasures” that would cause “deep economic harm,” the official said.

“When it comes to Ukraine, we have made clear our deep concern about evidence that Russia is stepping up its planning for significant military action against Ukraine,” the official said.

The official declined to say whether the U.S. would take direct military action against Russia if there were an invasion but said the focus is on using other diplomatic methods.

“The United States is not seeking to end up in a circumstance in which the focus of our countermeasures is directly from American military force as opposed to a combination of support for the Ukrainian military, strong economic countermeasures and the substantial increase in support and capability to our NATO allies,” the official said.

Russia has publicly denied any aggressive plans toward Ukraine while pushing for a guarantee from Washington that Ukraine won’t join NATO.

“The leaders will discuss a range of topics in the U.S.-Russia relationship, including strategic stability, cyber, and regional issues,” Psaki said in a statement.

Russia has pushed to keep Ukraine from being able to join NATO. The administration official said the U.S. will leave the decision up to NATO members and Ukraine, adding that the U.S. supports discussions between NATO and Russia to address “larger issues of concern on both sides — Russia’s concerns with NATO activities and NATO and American concerns with Russian activities.”

Biden will speak with key European allies before the call to coordinate his message and ensure that he goes in with a united front. The call follows weeks of diplomacy with European allies, as well as discussions with Russia and Ukraine at multiple levels.

Secretary of State Antony Blinken will speak with Ukrainian President Volodymyr Zelenskiy before the call, and Biden will talk to Zelenskiy in the days afterward.