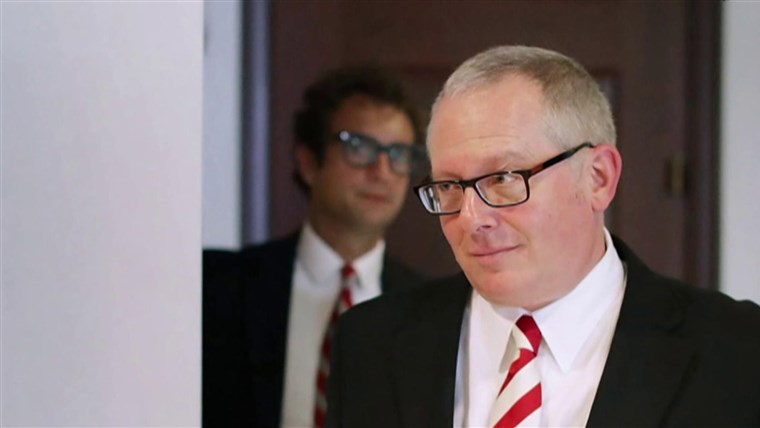 The top spokesman for the Department of Health and Human Services is taking a leave of absence, the agency announced Wednesday, days after he promoted dangerous conspiracy theories during a Facebook Live video.

In the video, first reported by The New York Times, Michael Caputo, HHS’ assistant secretary for public affairs, charged that scientists at the Centers for Disease Control and Prevention “don’t want America to get well.” He also urged supporters of President Donald Trump to load up on ammunition in preparation for a violent left-wing rebellion if the president wins re-election.

Caputo also said in the video that he has been having health issues and that his “mental health has definitely failed.”

In the announcement, HHS said Caputo “has decided to take a leave of absence to focus on his health and the well-being of his family.”

Caputo issued a statement a short time later saying he was receiving treatment for a recently discovered “lymphatic issue.” He made no mention of his Facebook screed but said the health issue “contributed to my stress level, along with the increasing number of violent threats leveled at me and my family back in Buffalo.”

The White House named Caputo, a longtime Trump loyalist, to HHS in April, following reports that painted HHS Secretary Alex Azar as having raised early concerns about the coronavirus.

In the months since, Caputo, who has no science background, has been accused of trying to interfere with the CDC’s messaging about the virus, but never as spectacularly as he did in the Facebook rant.

In the video, Caputo repeatedly blasted scientists at the CDC, The Times reported, publicly undermining the agency’s work during a pandemic that has already claimed the lives of over 190,000 people in the U.S.

Get breaking news and insider analysis on the rapidly changing world of media and technology right to your inbox.

“There are scientists who work for this government who do not want America to get well, not until after Joe Biden is president,” Caputo said. They’ve been pushing “rotten science,” he argued.

He reportedly apologized to fellow HHS staffers Tuesday and said he was considering taking a medical leave.

Azar sidestepped a question about the video Tuesday during a visit to Vanderbilt University Medical Center in Nashville, Tennessee.

In the same broadcast, Caputo appeared to seize on the fears of some Democrats that Trump would try to stay in office even if Biden wins the election — and turned the argument on its head. He suggested Trump would win but Biden would refuse to concede.

“And when Donald Trump refuses to stand down at the inauguration, the shooting will begin,” Caputo said.

He referred to the killing of a Trump supporter in Portland, Oregon, by a self-declared “anti-fascist” as a “drill.”

“The drills that you’ve seen are nothing,” Caputo said. “If you carry guns, buy ammunition, ladies and gentlemen, because it’s going to be hard to get.”

Caputo also said an unidentified “they” are “going to have to kill me.”

In a statement to The Times on Monday, HHS praised Caputo, calling him “a critical, integral part of the president’s coronavirus response, leading on public messaging as Americans need public health information to defeat the Covid-19 pandemic.”

The extraordinary Facebook comments came two days after Politico reported that Caputo and his press team had been demanding changes in CDC reports that they believed were contrary to Trump’s messaging about on the virus.

Caputo confirmed that was the case in an interview with The Washington Post on Saturday. Referring to some of the CDC’s scientific reports, he said: “There’s concern across [HHS] that some of the scholarship has been tainted by politic. That’s my opinion.”

In the statement announcing Caputo’s leave, HHS also announced the departure of Paul Alexander, an old friend of Caputo’s who had been hired as his “science adviser.” Alexander was reportedly involved in attempts to get the CDC to water down its mortality reports, complaining to the agency officials in an email that the reports appeared to be “hit pieces on the administration.”

The HHS statement said he’d been “hired to engage with the department on a temporary basis” and “will be leaving the department.”

House Democrats are investigating the reported meddling by Caputo and his team.

Sen. Patty Murray of Washington, the top Democrat on the health committee, had called for Caputo’s resignation Monday. He’s “a yes-man for President Trump with no scientific expertise who publicly attacked CDC scientists and privately interfered with key CDC reports,” Murray said.

Senate Minority Leader Chuck Schumer, D-N.Y., took it a step further and called on Azar to resign, saying he has been “entirely silent about the chaos and mismanagement” in the agency while failing to rein in “political appointees,” a reference to Caputo.

Both the White House and HHS said Azar isn’t going anywhere. “It’s stunning that the Democratic leader of the Senate would call for the resignation of the Health and Human Services secretary in the middle of a pandemic,” said White House spokesman Judd Deere.

Caitlin Oakley, a spokesperson for HHS, said Schumer’s comments were “uninformed and are an attempt to mislead the American people and discredit the historic work of the Trump administration to combat Covid-19.”