He helped spark a revolution when he was a boy. Now he wonders if it was worth it.

Home WORLD NEWS He helped spark a revolution when he was a boy. Now he wonders if it was worth it. 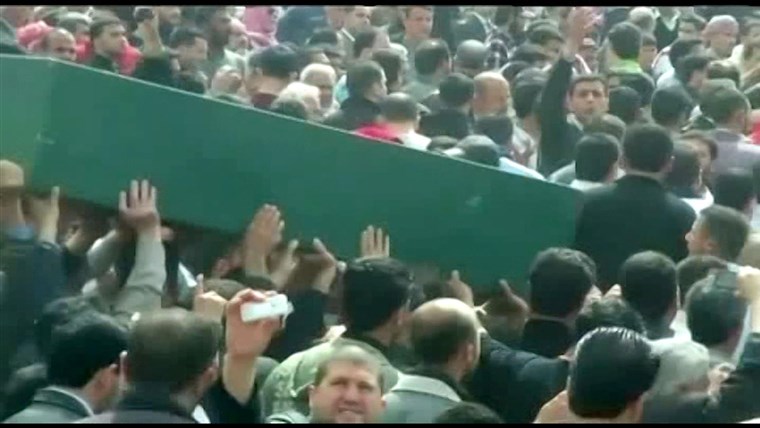 His arrest helped trigger the uprising against Syrian President Bashar al-Assad’s rule. But 10 years on, Bashir Abazayd wonders whether the revolt was worth it.

“I sacrificed everything,” he says softly, speaking by telephone.

In the past decade, Abazayd says, he has lost his brother to an airstrike, his father to a broken heart 10 days later and his mother and other siblings to Jordan. A conflict he unwittingly helped ignite swept away his home, his city, his friends and his youth — and inflamed the Middle East.

Abazayd, 25, was only a teenager when, he says, he was arrested and accused of scrawling anti-government graffiti on the walls of his school in the southwestern Syrian city of Daraa.

“Who would have believed that the regime would kill its own people with chemicals and warplanes?” he asks, speaking from Turkey’s Black Sea port of Samsun, where he lives, referring to chemical attacks widely blamed on Assad’s government. “That it would destroy homes, hospitals, schools and markets, entire cities, that it would burn villages?”

Ten years on, Syrian authorities’ treatment of the boys they said were responsible for the graffiti is widely considered the fuse that sparked the uprising against Assad and made Daraa its cradle. The war that followed was bloodier and more brutal than most could have foreseen — killing hundreds of thousands of people, displacing half the prewar population of 22 million and wiping out the economy.

Abazayd says that, inspired by the mass protests that had toppled dictators in Tunisia and Egypt, he and his friends were enthralled by the creeping Arab Spring and wanted to send a message to Assad, a British-trained ophthalmologist, whose family had ruled Syria for more than four decades at that time.

In the same period, graffiti appeared on the wall of their school.

Over the course of three weeks, Abazayd gave conflicting accounts about his involvement with the graffiti. He now says that he and his friends had nothing to do with it but that it was not long before Syrian security forces rounded them up anyway.

No court or prison records are publicly available in Syria to officially confirm that Abazayd was arrested in connection with the anti-Assad graffiti in 2011.

However, the Daraa Martyrs Documentation Office, which has documented civilian casualties and detentions in Daraa province since 2011, shared the names of 16 boys aged 10 to 14 who it says were arrested, and Abazayd’s was on the list.

Two activists and a local cameraman in Daraa also confirmed that he was among those who were detained.

Cradle of the revolution

Syria lies in ruins, and while whole swaths of territory remain outside government control, Assad maintains an undeniable grip on what is left of a country that was once a Middle Eastern powerhouse.

Scarred by its experiences in Afghanistan and Iraq, the United States, meanwhile, has done its best not to get embroiled in another long and costly war. Instead, it has trained and equipped armed opposition groups and used sanctions and airstrikes to pressure Assad to resign or change tack, with little success.

Neither Abazayd nor his friends are to blame for what happened after the news of their arrests spread.

Some Syrians believe that the uprising was inevitable and that if it hadn’t been triggered in Daraa, it would have been sparked in another town. In early 2011, Daraa was an unremarkable city important only for its proximity to a crucial border crossing with Jordan.

Abazayd describes in a shaky voice how he was beaten with sticks and cables in detention until his face was unrecognizable and he wished he were dead.

The people of Daraa descended on the streets, calling for the boys’ release. Then, after Friday prayers on March 18, 2011, security forces opened fire on protesters, reportedly killing two of them in what activists regard as the first deaths of the uprising.

The fuse had been lit.

Demonstrations spread like wildfire, followed by a vicious crackdown. Soon Assad, who hails from the Alawite sect, an offshoot of Shiite Islam, was at war with his own people.

As time ticked by, the conflict became more complex as foreign powers, militant groups, the Kurds — a stateless ethnic group concentrated in the Middle East — and the Islamic State extremist group all intervened, weaving a web of warring parties. Russia and Iran have supported the government, while the U.S., Gulf Arab countries and Turkey backed the rebel groups.

The U.S. was also among the countries to send troops to fight ISIS, which exploited the instability to expand its self-declared caliphate’s territory, and backed the Kurdish-led Syrian Democratic Forces in its battle against the militants. To this day, about 900 U.S. troops are in Syria working to secure the enduring defeat of ISIS, according to U.S. Central Command.

Video footage shared on social media Thursday appears to show people gathering outside the Omari Mosque in Daraa, where the deadly demonstration started ten years ago to the day.

In the video, a banner can be seen hanging from the mosque emblazoned with the words in Arabic: “18th of March. The revolution is a right…and a right never dies.” People also dance and shout chants such as “Syria is ours, not Assad’s.”

Despite the violence, for many Syrians those heady months at the start of the revolution were full of hope.

“We started to have these deep conversations about democracy, about the shape of the state, about the regime, about what kind of democracy we will have,” said Daraa native Malath Alzoubi, a journalist who participated in the early demonstrations in the city and now lives in London.

“We thought it’s a wave and we’re part of this wave,” he said, referring to the Arab Spring uprisings that were unfolding across the Middle East.

The burning optimism that fueled many Syrian revolutionaries slowly died.

For some, it was when the Russians joined the conflict on the side of the government in 2015 or when the Syrian army took back control of their hometowns. For others, it faded gradually. Among a few, it continues to burn despite the devastation.

Many opposition supporters in Syria feel let down by the international community, which they say failed to protect civilians from Assad’s government. Others were bitterly disappointed by President Barack Obama’s decision not to intervene against Assad after having accused the government of deploying chemical weapons against civilians, even though he had said their use would be a “red line” for the U.S.

In July 2018, Russian-backed Syrian government forces raised the national flag over Daraa and recaptured the vital border crossing with Jordan in a significant victory for Assad.

As part of an agreement devised by Moscow, rebel fighters were given the option of leaving Daraa and going with their families to other rebel-held parts of the country or accepting an offer of amnesty from the government.

Syrian government forces also agreed not to enter the main residential area of the city, known as Daraa al-Balad, on the condition that rebels there gave up their heavy weaponry, said Omar Hariri, a member of the Daraa Martyrs Documentation Office, the rights monitoring group.

A friend of Abazayd’s, who claims responsibility for spray-painting the anti-Assad message in February 2011, still lives in that part of Daraa. The friend, who wants to remain anonymous because he is concerned that he will be targeted by Syrian forces, says he regrets not having left the city while he still had a chance.

The former rebel fighter, whom the documentation office also identified as among those arrested in 2011, believes it’s only a matter of time before the government takes over the enclave and arrests or kills those inside.

“I made the wrong decision. I should have left Daraa,” he said recently by phone. “I’m a father now, and that makes me worry even more.”

The scars of war

While Daraa may no longer be on the war’s front lines, life remains difficult.

The city and the wider province are plagued by targeted killings and occasional clashes between government forces and former rebels, said Hariri of the documentation office.

The violence highlights Assad’s battle to bring the communities to heel long after his forces have raised the Syrian flag in their towns and villages.

Residents say that electricity is scarce and that people wait in line for hours to buy bread. Syria’s currency has plunged because of the war and the crippling economic crisis.

More than half of the Syrian population can’t afford a basic meal; the price of basic foods is more than 200 percent higher than it was this time last year, according to the United Nations.

And the prospect that anything will improve soon feels remote.

Talks in Geneva among the government, the opposition and civil groups aimed at revising the Syrian Constitution made little progress, and Assad is all but guaranteed to win a fourth consecutive seven-year term in presidential elections this year.

State Department spokesman Ned Price said the Biden administration would continue to promote a political settlement to end the conflict and seek to restore U.S. leadership on humanitarian aid to the country.

He added that if there is to be a sustainable end to the conflict, the Syrian government must change its behavior, but he did not call for Assad to step down.

Meanwhile, those outside Daraa have also suffered. A generation of young Syrians spread around the globe have lost their youth to the devastating conflict.

Abazayd, who used to help out on his father’s farm but now works long hours as a construction worker in Turkey, says he can barely remember life before Syria began to self-destruct. Instead of a peaceful childhood, his memories are of warplanes, destruction and fear, he says.

The father of a daughter now, he longs to return to Daraa to visit the graves of his brother and his father, but he is realistic that that day will not be soon.

And yet, in spite of all that he has lost, he remains defiant.

“I’m sure that the revolution will continue and that there will be more anniversaries in the coming years until the Syrians, with the help of Western countries, drop Bashar Assad and his regime,” he said.

Syrian officials did not respond to a request for comment.