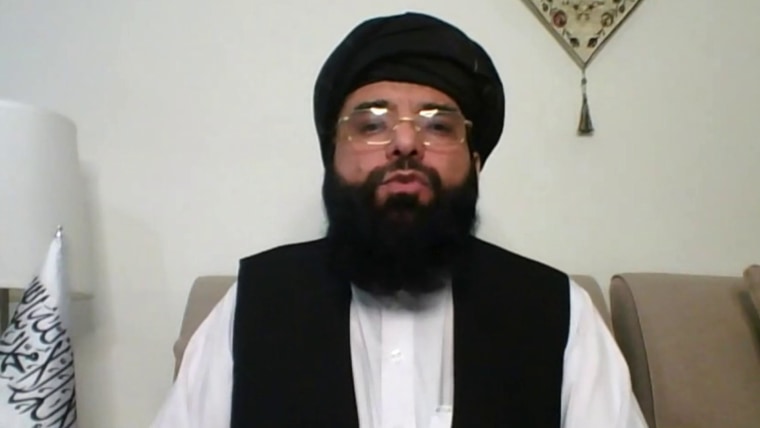 WASHINGTON — President Joe Biden on Monday defended his administration’s decision to continue with the U.S. military drawdown in Afghanistan, blaming the U.S.-backed Afghan government and military for allowing the Taliban to take over.

“Afghanistan political leaders gave up and fled the country; the Afghan military collapsed, sometimes without trying to fight,” Biden said. “If anything, the developments of the past week reinforce that ending U.S. military involvement in Afghanistan now was the right decision.”

Speaking to the American public from the White House, Biden said he stood firmly by his decision and argued that he was faced with a choice to either followthrough with the drawdown or escalate the conflict into its third decade and ultimately sacrifice more American lives.

“I stand squarely behind my decision,” Biden said. “After 20 years, I’ve learned the hard way that there was never a good time to withdraw U.S. forces. That’s why we’re still there.”

The Taliban seized control of Afghanistan’s capital on Sunday following President Ashraf Ghan’s departure from the country, bringing an abrupt end to the 20-year U.S. effort to restructure the Afghan government and its military.

Within hours of the Taliban takeover, chaos erupted at Kabul’s international airport as desperate Afghans raced to flee the country. A harrowing video captured Monday showed Afghans storming the military side of the airport and clinging to a U.S. Air Force plane as it attempted to move down the tarmac. In the video, some people appear to fall to their death as the aircraft takes off.

The White House appeared to be caught off-guard by the Taliban’s rapid rise. Over the weekend, the U.S. was forced to send additional troops Afghanistan to help with evacuations and the U.S. embassy, which the State Department had insisted Thursday would remain open, had been fully evacuated by Sunday evening.

“The truth is, this did unfold more quickly than we had anticipated,” Biden said Monday, insisting that his administration was prepared for all scenarios but that the Afghan government and military were unwilling to defend their own country.

“American troops cannot and should not be fighting in a war and dying in a war that Afghan forces are not willing to fight for themselves,” he said, arguing that if their military was unable to mount any real resistance to the Taliban now, a few more years of U.S. troops on the ground would not have made any difference.

As the Taliban took hold of the country, Democrats on Capitol Hill and former Obama administration officials joined Republicans in publicly criticizing Biden’s handling of the situation. While most agreed with the decision to remove troops, they attacked Biden’s failure to help the thousands of Afghans who assisted U.S. forces exit the country before the Taliban took over, and the scramble to evacuate Americans from the country.

“This is a crisis of untold proportions,” said Rep. Jackie Speier, D-Calif., who had urged Biden to make an address to the nation. “This is an intelligence failure.”

Ryan Crocker, who was ambassador to Afghanistan in the Obama administration, said the Biden administration had “a total lack of coordinated, post-withdrawal planning,” and that the predicament was a “self-inflicted wound.”

Former President Donald Trump negotiated a deal while in office with the Taliban to withdraw U.S. military personnel by May 1 of this year. After he was inaugurated, Biden said the withdrawal would be completed by the 20th anniversary of the Sept. 11th terrorist attacks.

In July, Biden insisted that a Taliban takeover was not inevitable and said that the Afghan military was well equipped and trained to keep the Taliban at bay. “I trust the capacity of the Afghan military,” Biden said at the time.