Biden, Putin say progress made in Geneva but gulfs on issues remain 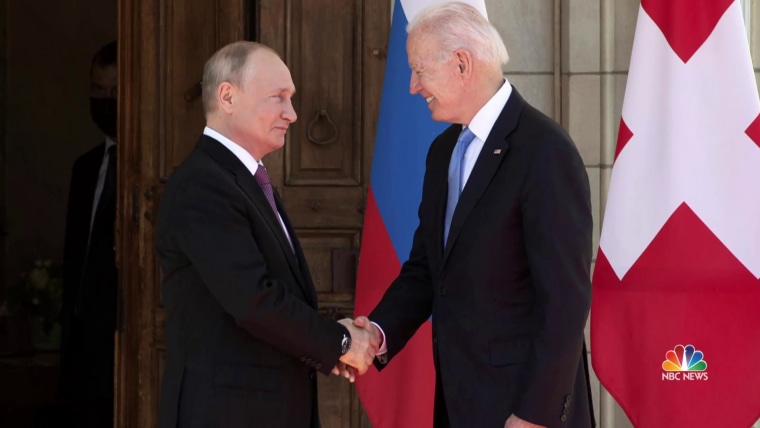 In separate post-summit news conferences, Biden described the tone of the discussions as “good, positive” and Putin said it was “constructive” and there was a “glimpse of hope” regarding mutual trust.

But the upbeat responses did not diminish the long-festering tensions between the two nations that have recently been strained by accusations of election interference, cyberattacks and human rights violations.

Putin continued to deny Russia’s role in recent cyberattacks against U.S. institutions. He also deflected when asked about the imprisonment of Russian opposition leader Alexei Navalny and alleged human rights abuses in his country, discussing, instead, gun violence in the U.S. and the Jan. 6 attack on the U.S. Capitol.

Biden said the men discussed the cases of Paul Whelan and Trevor Reed, Americans imprisoned in Russia; arms control measures; Navalny; the importance of a free press; cybersecurity; Russian attempts to destabilize democratic elections; Ukraine; and Belarus, among other topics.

“I told President Putin my agenda is not against Russia or anyone else. It’s for the American people,” Biden said.

“I also told him that no president of the United States could keep faith with the American people if they did not speak out to defend our democratic values, to stand up for the universal and fundamental freedoms,” Biden continued. “So human rights are always going to be on the table, I told him.”

The success of Wednesday’s talks, Biden said, would be determined in the next few months based on whether Putin’s confrontational posture toward the U.S. improves. While Biden said he could not offer any confidence that Putin would change his behavior, he felt that “the last thing” Putin wanted was a Cold War.

Biden said it was in Putin’s self-interest to cooperate with the U.S., saying the Russian leader’s desire to preserve his credibility worldwide could influence his behavior.

While Biden said he did not make any threats or give an ultimatum, he told Putin that the U.S. would respond if Russia attempted to interfere in its elections again and that there would be “devastating” consequences if Navalny died while in prison.

“The bottom line is I told President Putin that we need to have some basic rules of the road that we can all abide by,” Biden said.

Biden also said he gave Putin a list of 16 items he considered to be critical infrastructure that should be considered off-limits to cyberattacks and that the U.S. would respond if attacks continue.

Putin announced that he and Biden had reached an agreement to return the ambassadors of both nations to their respective posts and had agreed to begin “consultations” on cyber issues.

Back home, Republicans, some of whom released statements before the conclusion of Biden’s news conference, reiterated criticism of the president’s earlier decision to waive sanctions against the company overseeing construction of Russia’s Nord Stream 2 gas pipeline to Germany. The move faced bipartisan congressional opposition, and Republicans have said it amounted to handing Putin a major strategic boost in Europe.

Others took issue with Biden’s assessment that Putin was concerned with how the world viewed him and Russia’s relevancy on the global stage.

“Putin could care less about how the world views his efforts to silence dissidents at home and abroad,” Sen. Lindsey Graham, R-S.C., tweeted. “Again, quite frankly, I think he enjoys the reputation of being someone you don’t want to cross. Very dangerous observations by President Biden regarding Putin.”

The sitdown between the two countries ended slightly sooner than White House officials had suggested it would — lasting around just three hours — and consisted of one continuous session rather than the two that had been originally planned. Biden said that after two hours “we looked at each other like ‘OK, what next?'”

Biden and Putin were joined first by Secretary of State Antony Blinken and his Russian counterpart, Sergey Lavrov, along with translators, and later opened up the meeting to a larger group.

Security around Villa La Grange, the picturesque mansion and lakeside park where the summit took place, had been extremely tight. The park was blocked off by thick rolls of barbed-wire fencing with Swiss police patrolling the grounds. A large section of the city had been closed off with police boats dotting the crisp waters of Lake Geneva, in a city known for its neutrality and international cooperation.

The meeting between the two leaders came as relations between the two countries have deteriorated in recent years, most recently with ransomware attacks that originated in Russia on critical U.S. infrastructure. The attacks added to the strain caused by election interference, increased aggression toward Ukraine and Putin’s crackdowns on political opposition.

In the two months since Biden invited Putin to hold a summit, Russian groups have been linked to cyberattacks targeting U.S. government agencies, a major meat producer and the largest fuel pipeline on the East Coast.

Putin also voiced support for the leader of Belarus after the grounding of a passenger jet to arrest a dissident journalist, and Russia has banned political organizations linked to the jailed opposition leader Navalny.

Biden spent days preparing for the summit. Shortly before departing the U.S. for Europe, he gathered in the Roosevelt Room at the White House for a prep session with a group of outside Russia experts — including officials from the Trump and Obama administrations — to discuss a range of views about how to deal with Putin, according to a person familiar with the matter.

“He’s not just winging it. He’s putting a lot of time and attention into this meeting,” the person said.

Biden arrived in Geneva Tuesday afternoon following days of meetings with America’s closest allies during a gathering of the Group of Seven leaders, which include Canada, the U.K., France, Italy, Germany and Japan, and a summit of the NATO alliance countries.

He departed Geneva for Washington Wednesday following the Russia summit, marking the end to his first foreign trip as president.