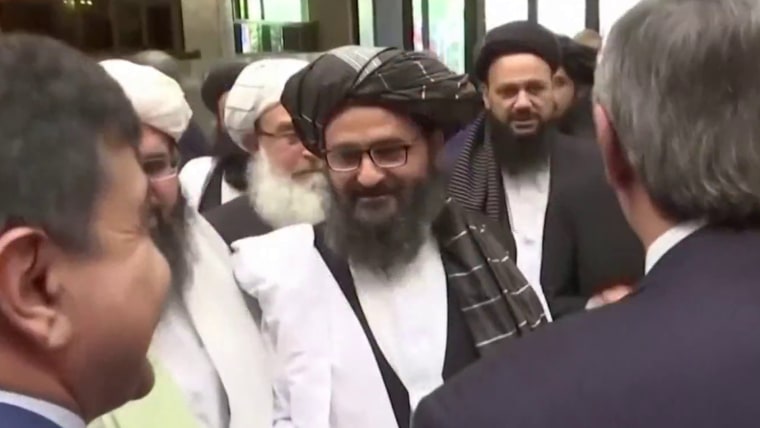 It flies over major cities, small towns and Kabul’s airport, evacuated by U.S. troops. Now the Taliban are trying to raise their white flag above Afghanistan’s Panjshir Valley — but they won’t be able to without a fight.

Panjshir, which is controlled by the National Resistance Front, a reincarnation of the Northern Alliance rebel group that fought alongside U.S. forces during the 2001 invasion, held out even as the rest of Afghanistan fell to the Taliban last month.

This week, both groups confirmed that the Taliban had launched an offensive to take the region, around 60 miles north of Kabul and in the towering Hindu Kush mountain range, between Kabul, the capital, and the strategically important Badakshan province.

Normally home to around 100,000 people, Panjshir — which translates to “five lions” in the Dari or the Afghan Persian language — has seen its population swell in recent weeks as thousands of refugees, including fragments of the shattered Afghan National Army, flocked to the area in search of safety.

Leading the National Resistance Front is Ahmad Massoud, 32, the son of the famed resistance leader Ahmad Shah Massoud, who was known as “the Lion of Panjshir” for his role in defeating the Soviet Union in the 1980s.

The elder Massoud’s forces would go on to fight the Taliban and other anti-Russian fighters as Afghanistan descended into a bloody civil war. He was criticized when his forces indiscriminately shelled western Kabul during fighting in 1992, killing hundreds of civilians.

Two days later, Al Qaeda terrorists flew planes into the World Trade Center in New York City, the Pentagon outside Washington, D.C., and a field in Pennsylvania. The Taliban, whom his forces were fighting, had sheltered Al Qaeda and the architect of the 9/11 attacks, Osama bin Laden.

The Taliban’s refusal to give bin Laden up triggered the U.S. invasion, which toppled their government later that year.

The younger Massoud, who was just 12 when his father was killed, was groomed from a young age to replace him one day.

After studying at Britain’s Sandhurst military academy a few years behind Prince Harry, he received a bachelor’s degree in war studies at King’s College London and, in 2016, a masters degree in international politics at City, University of London.

Two years ago, he was formally appointed as his father’s successor as the head of the forces in Panjshir.

“No matter what happens, my mujahideen fighters and I will defend Panjshir as the last bastion of Afghan freedom. Our morale is intact. We know from experience what awaits us,” Massoud said in a Washington Post op-ed three days after the Taliban marched unopposed into Kabul without firing a shot.

For all his fighting words, he said his first hope was to negotiate an agreement with the country’s new Taliban rulers.

Massoud is looking for a deal under which power was decentralized away from Kabul — giving Panjshir and other regions a degree of autonomy — and under which the Taliban commits to basic human rights, Ali Nazary, a spokesman for the National Resistance Front, said by telephone last week.

Any conflict would be “somewhat damaging” to their international image, he said, adding that the geography is “on the side of Massoud Jr. and his forces.”

“The entire province is a valley, really,” he said. “There is only one road, so, basically, if you can hold on to the entrance of the valley, no mechanized forces can make any progress. It is easy to block it.”

The resistance fighters are already asking the U.S. and its allies for humanitarian aid — including food, fuel and tents — as they prepare for the looming Afghan winter. In his op-ed, Massoud implored the Biden administration to provide weapons and ammunition.

“The United States and its allies have left the battlefield, but America can still be a ‘great arsenal of democracy,’” he said, invoking President Franklin D. Roosevelt’s slogan for the U.S.’s support of the U.K. and its allies in Europe a year before it entered World War II.

A State Department official said the U.S. does not “go into the details of all our diplomatic engagements.”

“The United States is talking to a range of Afghan leaders engaged in government formation talks,” the official said. “We encourage a peaceful and orderly transition of power to an inclusive government with broad support. That is the best outcome for Afghanistan’s long-term security and stability.”

Nazary said that with or without U.S. support, his people would hold firm to their tradition of resistance whatever happens.

“The people of Panjshir know how to survive, and they know how to fight invaders,” he said.