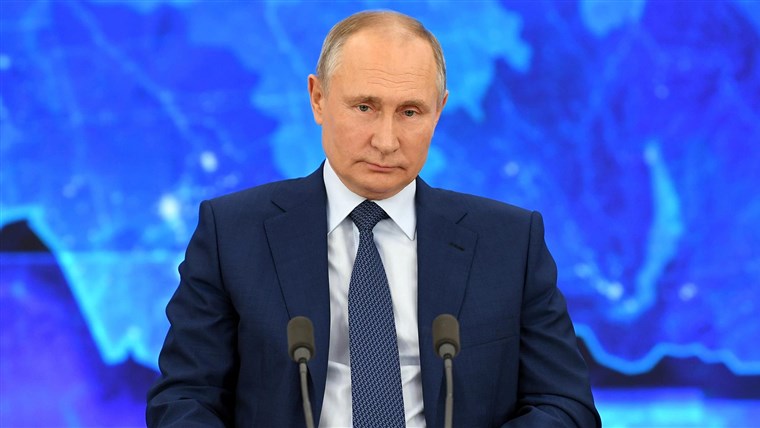 MOSCOW — Russian President Vladimir Putin said Thursday that he has yet to receive the Russian-made Sputnik V vaccine because it has not been approved for anyone over 65.

He also brushed off accusations that the Russian state was behind the poisoning of opposition figure Alexei Navalny earlier this year.

“I am a fairly law-abiding person,” said Putin, 68, on Thursday, referring to the vaccine.

“I listen to the recommendations of our specialists. So I haven’t had the shot yet. But I will absolutely do it as soon as that becomes possible,” he added during a wide-ranging four-and-a-half hour call-in event when he takes questions from reporters and ordinary citizens.

Putin ordered widescale vaccinations in Russia earlier this month, with doctors and teachers at the front of the line to receive the shots.

Sputnik V has been touted in Russia as the world’s first registered Covid-19‘s vaccine after it received regulatory approval in early August. However, it has drawn criticism from experts, because at the time it had only been tested on several dozen people.

Russia’s regions are being hit hard by the virus amid the pandemic’s second wave, and the health care systems in many remote areas are being pushed to the limit. There have been reports of shortages not only of critical medicines, but also of hospital beds and medical personnel to tend to critical patients.

Putin also said that Navalny‘s poisoning earlier this year was a “trick” to harm the Russian government and suggested the opposition leader enjoyed the support of the U.S.

“But that absolutely does not mean he needs to be poisoned,” said Putin. “Who needs him?”

“If someone had wanted to, they would have finished the job,” said Putin.

The annual conference is a pillar of Putin’s domestic image building, and something of a fixture in the holiday season in Russia. He has done this almost every year of his rule as president. What started as a simple hourlong call-in show on state television has become a marathon production designed to portray Putin as a transparent and caring leader.

The pandemic has complicated the format of this year’s event, and at one point even threatened to cancel it entirely.

At the event, Putin also hinted that he hopes that Russia’s relationship with the U.S. will improve under President-elect Joe Biden, calling him “an experienced person both in domestic and foreign policy.”

He repeated his calls for a one-year extension of the last existing nuclear arms control pact between his country and the U.S. that is due to expire in February.

The New START treaty, signed in 2010 by former President Barack Obama and former Russian President Dmitry Medvedev, limits each country to no more than 1,550 deployed nuclear warheads and 700 deployed missiles and bombers, and envisages sweeping on-site inspections to verify compliance.

“Russia has new hypersonic systems that no one else has, we are aware of that, and we are open to putting that on the table but so far no one has asked about it,” said Putin, who blamed the U.S. for starting a new arms race.

Responding to a question about the risk of a new arms race, Putin said: “It happened already, and this is obvious.”

This annual tradition looks certain to outlast the pandemic. In March, the Russian Parliament approved a sweeping constitutional reform that will allow Putin to stay in power for another 12 years after his current term ends in 2024.