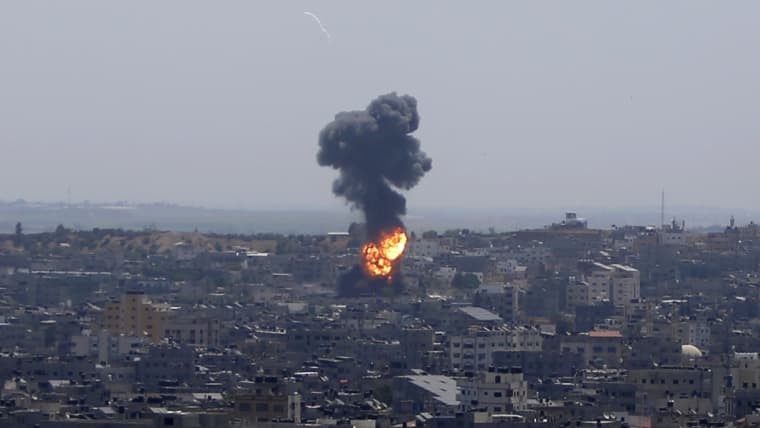 JERUSALEM — Samira Dejani, a Palestinian teacher, held back tears as she stood in the courtyard of her home in the east Jerusalem neighborhood of Sheikh Jarrah, recalling years spent living here with her parents, children and grandchildren.

Her family is among several that face eviction from the neighborhood after a decadeslong legal battle with Jewish settler organizations that say they have valid title to the land dating to before Israel was a state. The conflict has helped spark one of the most consequential escalations in fighting between Israelis and Palestinians since 2014.

With nowhere else to turn, Dejani, 60, is appealing directly to America’s president for help.

“Oh, Joe Biden, think, think, think about humanity, please!” she said this week. “Please put yourself in our shoes — if you are a human being, think that we are also human beings.”

Her appeals are being taken up by parts of the international community and even left-wing members of Biden’s party, who are demanding that he speak up in behalf of Palestinians. But the rising violence challenges Biden, who has spent the past three months burnishing his progressive bona fides, to pick a side in a conflict that has brought his predecessors little but disappointment.

Like his predecessors, Biden is having to adapt his policies in real time as events on the ground quickly outpace the best-laid plans. Late Wednesday, Arab and Jewish mobs beat people and torched cars in a wave of communal unrest. As the conflict intensified and the death toll grew to at least 90, political leaders in Israel urged an end to the “anarchy” on the streets of mixed-ethnicity towns across the country.

At least 115 Palestinians, including 27 children, and eight Israelis have been killed, officials on both sides said, as the Israeli military bombards the impoverished Gaza Strip and the militant group Hamas continues its rocket attacks on Israel. On Friday, Israeli ground forces joined in shelling Gaza, representing a major escalation of the conflict.

‘No mention of Sheikh Jarrah’

Now, substantial pressure on Biden to act is coming not only from human rights organizations and pro-Israel Republicans, but also from the left wing of the Democratic Party.

In a call Wednesday with Israeli Prime Minister Benjamin Netanyahu, Biden “condemned the rocket attacks by Hamas and other terrorist groups, including against Jerusalem and Tel Aviv,” the White House said in a readout of the conversation.

Biden also “conveyed his unwavering support for Israel’s security and Israel’s legitimate right to defend itself and its people, while protecting civilians,” it said.

The administration’s response did not sit well with a handful of progressive Democrats who have tried to elevate support for the Palestinian cause from the fringes to the mainstream.

Rep. Ilhan Omar, D-Minn., who in the past has said “we have a negotiating partner in the White House,” was scathing about the Biden-Netanyahu conversation.

Omar’s comments reflect the anger caused by the expansion of Jewish settlements in Sheikh Jarrah, which is on land that helps form the final link in a settlement circle surrounding east Jerusalem — an area that Palestinians hope will be the capital of a future state.

“No mention of the ongoing occupation of millions in an open air prison,” she added, referring to the tiny, blockaded Gaza Strip, home to 2 million Palestinians, from which Hamas has launched more than 1,500 rockets at Israel.

Blanket statements like these w/ little context or acknowledgement of what precipitated this cycle of violence – namely, the expulsions of Palestinians and attacks on Al Aqsa – dehumanize Palestinians & imply the US will look the other way at human rights violations. It’s wrong. https://t.co/afCgoGdiMG

Israel rejects accusations that it enforces a form of apartheid, which under international law is considered a crime against humanity.

Americans still favor Israel by wide margins, but recent polls show that they are warming to the Palestinians.

A Gallup poll published in March found that 30 percent of Americans held a favorable opinion of Palestinians, up from 21 percent in 2018. Among Democrats, 53 percent want the U.S. to pressure Israel more — the first time a majority has taken that position.

A slap in the face

Ben Rhodes, a deputy national security adviser in the Obama administration who focused on the Middle East, has said it was unlikely that Biden would break with previous American administrations in his approach to Israel.

“You have yet to see the Biden team invest in a different approach to promote Palestinian statehood,” he said, referring to moribund talks to establish an independent country alongside Israel. “It feels like that’s an issue that they see as a political loser or perhaps as an impossible job at this point.”

And after four years of President Donald Trump’s extravagant support for Israel’s right-wing prime minister, Biden has inherited a conflict that is even more lopsided than it was under President Barack Obama.

Biden has already rolled back many of Trump’s restrictions on hundreds of millions of dollars in U.S. aid to the Palestinians. But he has said he will not reverse Trump’s boldest diplomatic moves, such as his recognition of Jerusalem as Israel’s capital. And as Iran eclipsed Israel as the primary threat to Arab leaders, the Trump administration helped negotiate formal diplomatic relations between Israel and four Arab states.

Trump was also the first president to legitimize Israeli settlements on occupied Palestinian land, ending decades of U.S. policy that had said they were illegal.

But on the question of such settlements, like Dejani’s home in Sheikh Jarrah, Biden is in a once-bitten, twice-shy situation.

Eleven years ago, when he was on a vice presidential trip to Israel to promote peace, Israeli authorities approved a large expansion of a settlement in east Jerusalem called Ramat Shlomo. The timing of the announcement was widely seen as a slap in the face to the Obama administration.

“It was incredibly frustrating, because we were trying to get meaningful peace talks going between Israelis and Palestinians,” Rhodes said. “Announcements of settlement expansions were always the most provocative thing on the Israeli side.”

Ramat Shlomo was first developed in the 1990s, mostly by American Jews of the Chabad-Lubavitch Hasidic movement. About 20,000 ultra-Orthodox Jews live in tightly packed villas on neat streets that wind up at a northeastern Jerusalem hillside — land Israel annexed after its 1967 war with Jordan.

Unlike Jews, Palestinians who held titles for what was Ramat Shlomo’s undeveloped land before the 1967 war said they have been unable to claim them back.

Dejani’s situation in Sheikh Jarrah dates back even further, to 1948, when Jordan gave the land to Palestinian refugees who had fled their homes in what was then the new state of Israel. But after Jordan lost the territory in the 1967 Six-Day War, settler groups launched legal campaigns to claim the area, arguing that it was Jewish property.

Even if he wanted to, Biden would not be able to reverse the Abraham Accords, which were brokered by Trump and sealed diplomatic ties between Israel and the United Arab Emirates, eventually leading to deals between Israel and Sudan, Morocco and Bahrain.

Most of those states, along with Israel’s other Arab diplomatic partners, have released statements appealing to Israel to end provocations against Palestinians.

But their outrage has been largely restrained — many Arab Gulf leaders are far more worried about the long, destabilizing reach of homegrown Islamist militants and Iranian nuclear and regional ambitions than they are about Israel.

Indeed, the strongest pressure on Biden still comes from within his own party.

“I think what happens in the last 72 hours might cause some rethink in Washington,” said Yossi Mekelberg, an associate fellow with the Middle East and North Africa Program at London’s Chatham House think tank.

Conditions are ripe for a so-called third intifada, or Palestinian uprising, he said, and U.S. officials may decide that “this place is too crazy to leave it on its own — we need to do something.'”