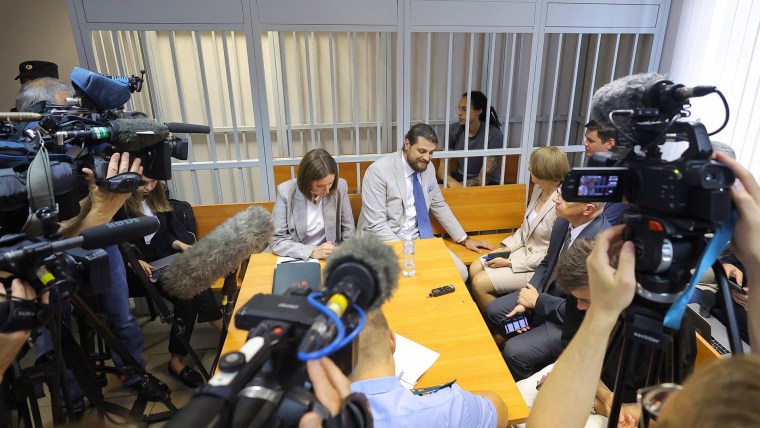 WNBA star Brittney Griner was sentenced to 9 years in Russian prison after being convicted on drug charges by a Moscow court Thursday.

Griner pleaded guilty last month in a lengthy trial that has underscored the frayed relations between the United States and Russia since the Kremlin’s invasion of Ukraine.

Prosecutors asked for a sentence of 9 1/2 years afterclosing arguments Thursday. In a final plea for leniency, an emotional Griner apologized and repeated that she never intended to break any Russian laws but that she had made “an honest mistake.”

Just hours later, Judge Anna Sotnikova returned to announce she had been found guilty of drug possession and smuggling. Griner, 31, will also have to pay a fine of 1 million rubles ($16,590), but can appeal the verdict.

Attention will now turn to the potential for a prisoner swap between Washington and Moscow. U.S. officials are not expecting rapid movement in the effort to get Griner released, but will keep pressing the issue, a U.S. official told NBC News.

“Today, American citizen Brittney Griner received a prison sentence that is one more reminder of what the world already knew: Russia is wrongfully detaining Brittney,” President Joe Biden said in a statement shortly after the verdict was announced.

“It’s unacceptable, and I call on Russia to release her immediately so she can be with her wife, loved ones, friends, and teammates. My administration will continue to work tirelessly and pursue every possible avenue to bring Brittney and Paul Whelan home safely as soon as possible.”

Griner’s legal team said she was “very disappointed,” in a statement to reporters outside the courhouse, adding that they were “very suprised by the verdict.

“The court completely ignored all the evidence of the defense, and most importantly, the guilty plea,” her lawyers said in a separate statement sent on the Telegram messaging app.

They added that they will file an appeal.

And Griner’s WNBA team, the Phoenix Mercury, said it remained hopeful the Biden Administration will secure the basketball great’s freedom.

“While we knew it was never the legal process that was going to bring our friend home, today’s verdict is a sobering milestone in the 168-day nightmare being endured by our sister, BG,” the WNBA franchise said in a statement.

“We remain heartbroken for her, as we have every day for nearly six months. We remain grateful to and confident in the public servants working every day to return her to her family and us.”

Griner was detained at Moscow’s Sheremetyevo Airport in February; Russian authorities said they found vape canisters with cannabis oil in her luggage.

Griner, a two-time Olympic gold medalist, admitted the canisters were hers. She said she took them to Russia unintentionally after packing her luggage in a hurry.

The Kremlin has been accused of using Griner as a political pawn, while the Biden administration has been under growing pressure from her family and teammates to secure her release.

The U.S. government has proposed that Moscow release Griner and another American, Paul Whelan, who is serving a 16-year sentence for espionage, in exchange for convicted Russian arms dealer Viktor Bout, according to two sources familiar with the matter.

White House press secretary Karine Jean-Pierre told reporters Monday that Russia responded in “bad faith” to the U.S. government’s offer with one of its own. “We don’t see it as a serious counteroffer,” she said.

Secretary of State Antony Blinken, who spoke with his Russian counterpart, Sergey Lavrov, last week — the highest-level diplomatic engagement between the two countries since the Russian invasion of Ukraine in February — to urge the Kremlin to accept the U.S. offer.

The Russians responded by urging the U.S. to refrain from speculation and pursue “quiet diplomacy” instead.

In a statement after the sentencing Thursday, Blinken said that it “compounds the injustice of her wrongful detention.”

“This step puts a spotlight on our significant concerns with Russia’s legal system and the Russian government’s use of wrongful detentions to advance its own agenda, using individuals as political pawns,” he added.

In May, the State Department reclassified Griner as having been “wrongfully detained” and transferred oversight of her case to the its presidential envoy for hostage affairs. Kremlin spokesman Dmitry Peskov has denied Griner is being held as a hostage.

Biden spoke with Griner’s wife, Cherelle Griner, last month. He also sent a letter directly to Griner after she sent him a handwritten note pleading for help to get her released.

On Thursday, Griner was led into a cage inside the courtroom in handcuffs, wearing a gray-colored shirt. Before the proceedings began, she displayed a photo of her teammates from the Russian club she played for in the WNBA off-season.

Her lawyer Maria Blagovolina called prosecutors’ requests for a strict sentence “nonsense.” The charges carry a maximum sentence of 10 years.

Her defense team called into question some of the expert analysis used in the case and said Griner did not have proper interpreter access during her arrest. They also pointed out Griner’s many athletic accomplishments, including in Russia, where the 6-foot-9 native of Houston plays for Ural Mining and Metallurgical Company Ekaterinburg.

Her lawyers reiterated that Griner has only used cannabis medically, and has never used it in Russia. They asked for Griner to be acquitted or be given the most lenient sentence possible.

As Griner addressed the court, her voice trembled as she apologized to her fans, family and teammates for any embarrassment or damage that she may have brought on them. She called the Russian city of Yekaterinburg, where she played, her second home.