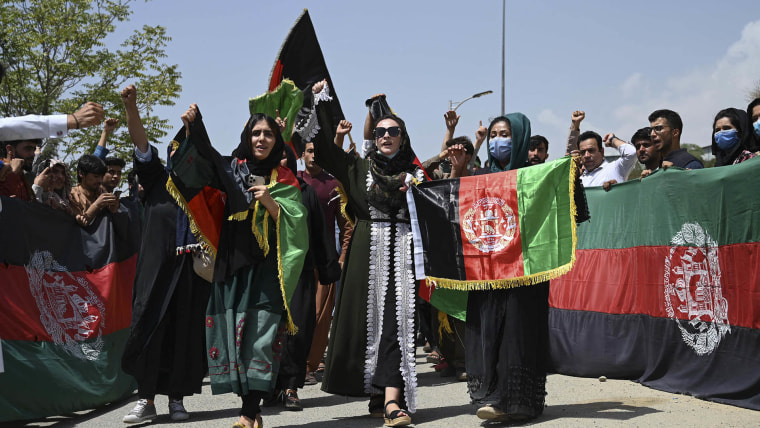 Fresh reports added to growing evidence of Taliban repression as the militant group’s fighters cracked down on protests and thousands of desperate Afghans continued their efforts to flee the country.

The Taliban are going door-to-door and screening names at Kabul checkpoints as they hunt for people who worked with U.S.-led forces or the previous Afghan government, according to an intelligence report submitted to the United Nations.

The report — compiled by a Norwegian intelligence group and sent to NBC News — casts further doubt on the militant group’s claims of a “general amnesty” in the wake of their takeover.

In recent days the group’s fighters responded with force to nascent protests in pockets across the country as their rule faced a number of early challenges.

Striking images earlier this week also showed a bloodied woman and child apparently beaten by Taliban fighters outside the capital’s airport, despite the group’s earlier assurances of “safe passage” for those wishing and able to flee.

Since the Taliban seized control of the country in a rapid military blitz, thousands of Afghans have sought to escape in fear of a return to the group’s hard-line rule.

One striking video showed a baby being passed over a wall topped with barbed wire at the airport.

Marine Corps spokesperson Maj. Jim Stenger said in a statement that it was handed to a member of the 24th Marine Expeditionary Unit.

“The baby seen in the video was taken to a medical treatment facility on site and cared for by medical professionals,” he added. “I can confirm the baby was reunited with their father and is safe at the airport.”

A White House official said Friday that the U.S. has evacuated approximately 9,000 people since last weekend, including a number of vulnerable Afghans.

The confidential threat assessment report, submitted to the U.N. by the Norwegian Center for Global Analyses, says that the Taliban have been screening people heading to the airport at checkpoints in the capital.

The report also said that the Taliban are rounding up Afghans on a blacklist of people in major cities like Kabul, Jalalabad and Herat.

“Taliban are intensifying the hunt-down of all individuals and collaborators with the former regime, and if unsuccessful, target and arrest the families and punish them according to their own interpretation of Sharia law,” said the report, dated Wednesday.

“Particularly at risk are individuals in central positions in military, police and investigative units.”

Afghans who helped U.S. and NATO troops during the two decades of their deployment in the country are also being targeted, it said.

Rep. Jason Crow — a Democrat and U.S. Army veteran who has been attempting to accelerate the evacuation of Afghan allies — said that the Taliban had been using files from Afghanistan’s intelligence agency to track down civilians who worked for the United States.

“They are methodically ramping up efforts to round those folks up,” he said, according to Reuters.

“The Taliban announced to the fighters that they have no right to go to anyone’s house and search for anything,” said Farzana Kochai, who decided to stay in Kabul despite the militant group taking control.

“But the fighters are searching the houses. They are coming and going to everyone’s house and seeing where there is a car or not.”

(Sky News is owned by Comcast, the parent company of NBC News.)

It is likely that those targeted will be “exposed to torture and executions,” said the head of the group behind the intelligence report, Dr. Christian Nellemann, in an email to NBC News.

“This will further jeopardize western intelligence services, their networks, methods and ability to counter both the Taliban, ISIS and other terrorist threats ahead,” he said.

A Taliban commander admitted that the militant group had sent out a team to “search places whenever we receive reports from our intelligence service.”

He added that it was their legal right to to check places where they had doubts about potential threats, but said they had not taken people into custody.

However, he said that those on a list of “most wanted people” would not be freed under the general amnesty the Taliban announced earlier this week, but would have to face the law.

The Taliban have sought to present a more moderate image to the world, pledging to respect women’s rights and making guarantees of safety for the country’s citizens.

But as women across the country feared a roll back of their rights under the new regime, a female journalist told NBC News the Taliban prevented from carrying out her work with the country’s public broadcaster because of her gender.

Shabnam Dawran said in a video shared on social media that she was turned away from her job on state-owned Radio Television Afghanistan.

“They told me that the regime has changed. You are not allowed, go home,” she said in the video.

She said the Taliban told her she couldn’t work for now and that they would make a decision about whether she could continue in the long-term.

“Stripping public media of prominent women news presenters is an ominous sign that Afghanistan’s Taliban rulers have no intention of living up their promise of respecting women’s rights, in the media or elsewhere,” said Steven Butler, the Asia program coordinator for the Committee to Protect Journalists, in a statement on Thursday.

German public broadcaster Deutsche Welle, meanwhile, said that Taliban fighters hunting one of its journalists shot dead one member of his family and severely injured another.

Amnesty International also said on Friday that an investigation found the Taliban had murdered nine ethnic Hazara men after taking control of the country’s Ghazni province last month, raising fears that the group’s fighters will target the country’s Shiite minority.

NBC News has not verified the reports.

The Taliban urged unity ahead of Friday prayers, the first since they seized power, calling on imams to persuade people not to leave Afghanistan amid the chaos at the airport, protests and reports of violence.