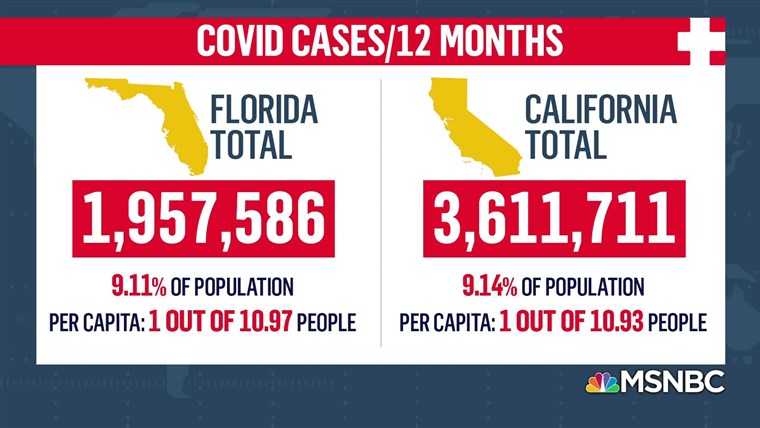 States with Democratic governors had the highest incidence and death rates from Covid-19 in the first months of the coronavirus pandemic, but states with Republican governors surpassed those rates as the crisis dragged on, a study released Tuesday found.

“For death rates, Republican-led states had lower rates early in the pandemic, but higher rates from July 4 through mid-December,” the study found.

The researchers theorized that one reason for the change is that Democrats were in charge of states where people who had the virus first arrived in the country — but Republicans were less stringent about safeguards, which could have contributed to their states’ ultimately higher incidence and death rates.

“The early trends could be explained by high Covid-19 cases and deaths among Democratic-led states that are home to initial ports of entry for the virus in early 2020,” the researchers wrote. “However, the subsequent reversal in trends, particularly with respect to testing, may reflect policy differences that could have facilitated the spread of the virus.”

The study, which which was published in the peer-reviewed American Journal of Preventive Medicine, examined Covid-19 “incidence, death, testing, and test positivity rates from March 15 through December 15, 2020,” when there were 16 million confirmed cases in the U.S. and 300,000 deaths. It focused on per-capita infection and death rates in the 26 GOP-led states and 24 Democratic-led states and Washington, D.C., and made statistical adjustments for issues such as population density.

But “policy differences” between the Republican and Democratic leaders emerged as a big factor for the reversal of the states’ fortunes, the study suggests.

“The response to the coronavirus disease 2019 (Covid-19) pandemic became increasingly politicized in the U.S. and political affiliation of state leaders may contribute to policies affecting the spread of the disease,” the study said.

“Governors’ party affiliation may have contributed to a range of policy decisions that, together, influenced the spread of the virus,” the study’s senior author, Dr. Sara Benjamin-Neelon the Bloomberg School’s Department of Health, Behavior and Society, said in a statement. “These findings underscore the need for state policy actions that are guided by public health considerations rather than by partisan politics,” she added.

In terms of raw totals, states with Democratic governors have some of the highest overall numbers of deaths — as opposed to per capita rates — in the country. California, where Democrat Gavin Newsom is the governor, has the most reported Covid deaths in the U.S., with nearly 55,000 as of Thursday, according to NBC News’ tracker of cases and deaths in the U.S. New York, which the governor is Democrat Andrew Cuomo, has the second most, with just under 50,000.

The states with the third and fourth highest total death tolls both have Republican governors – Greg Abbott in Texas and Ron DeSantis in Florida. The tracker shows about 46,000 people have died to date in Texas, and more than 32,000 have died in Florida.

Those numbers have continued to rise. The NBC tracker shows there are now over 29 million confirmed cases and more than 530,000 deaths as of Thursday, the anniversary of the coronavirus outbreak being declared a pandemic.

Dareh Gregorian is a politics reporter for NBC News.