Zelenskyy expected to press U.S. for more military support in address to Congress 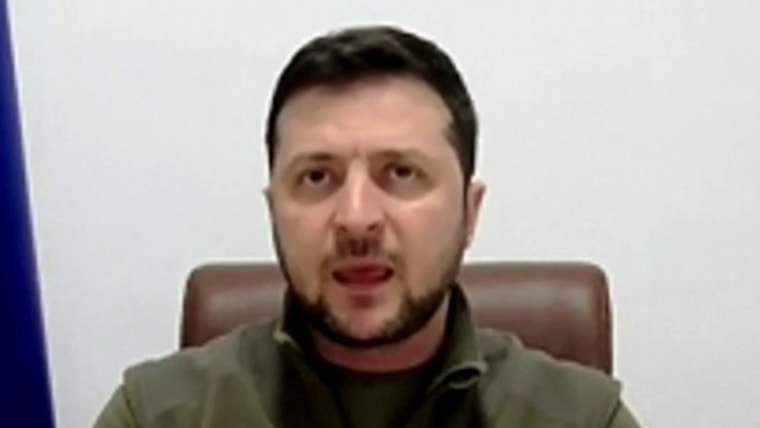 WASHINGTON — With Russian bombs pummeling his country, Ukrainian President Volodymyr Zelenskyy is expected to plead for more aggressive measures to help stop the war Wednesday in his virtual address to Congress.

His remarks, starting at 9 a.m. ET, will come a day after President Joe Biden signed into law a massive spending package that included $13.6 billion in military and humanitarian aid for Ukraine. Backed by lawmakers, Biden also ordered a U.S. ban on imports of oil and other Russian energy products on the heels of sanctions that have hobbled Russia’s economy and financial institutions.

Zelenskyy is expected to thank the U.S. for the recent aid package, but he wants Biden and other world leaders to go further.

Specifically, he has called for the U.S. and its NATO allies to set up a no-fly zone over Ukraine to deter Russian bombers that have hit hospitals, schools and residential buildings. He has also said Ukraine needs fighter jets.

Zelenskyy made the requests in a Zoom conference call with lawmakers this month, and he has implored other allies to deliver militarily. Biden has rejected those ideas, predicting that such actions would further escalate tensions with a nuclear power and spark “World War III.”

“Can you imagine when you call your friends, your friendly nations, and you ask: ‘Please close the sky. Please close the airspace. Please stop the bombing’? How many more cruise missiles have to fall on our cities before you make this happen?” Zelenskyy asked in a speech to Canadian lawmakers Tuesday.

“And they, in return, express their deep concerns about the situation … and they say, ‘Please hold on a little longer.’”

Zelenskyy’s speech, which will be livestreamed and publicly available, comes at a perilous moment for Ukraine. The war, now entering its fourth week, has killed hundreds of Ukrainians and forced nearly 3 million refugees to flee to neighboring countries.

Lawmakers said they are eager to hear what specific needs Zelenskyy has and how he thinks the U.S. can help Ukraine win the war.

“He’s got this one opportunity with us,” said Sen. Tommy Tuberville, R-Ala., who met with Zelenskyy in Ukraine last year.

“Putin’s in a little bit of a corner, because he can’t back out,” Tuberville said. But Zelenskyy is “the guy that’s really in a corner and is being encircled every day. They’re coming after him. We all know that, and he knows that.”

Scott Wong is a senior congressional reporter for NBC News.