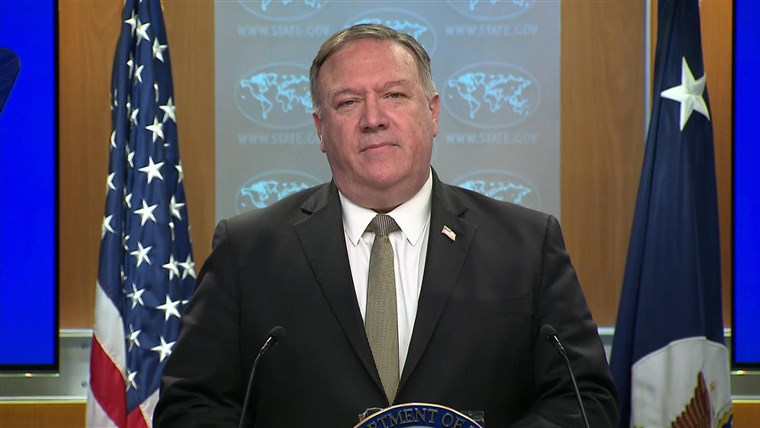 HONG KONG — The Chinese and Hong Kong governments strongly criticized Washington Saturday after the United States imposed sanctions on the territory’s leader Carrie Lam, and other officials, dismissing the move as “clowning actions” that would not intimidate Chinese people.

Hong Kong’s government said the sanctions were “shameless and despicable” and represented a “blatant and barbaric” interference in China’s internal affairs, warning that Hong Kong was being used as a “pawn” in the U.S.-China relationship.

The Trump administration announced Friday it would impose sanctions on Lam and Luo Huining, the head of China’s Liaison Office in Hong Kong, along with nine other current and former officials that Washington accuses of curtailing political freedoms, following the imposition of a draconian new security law in June.

“The unscrupulous intentions of the U.S. politicians to support the anti-China chaos in Hong Kong have been revealed, and their clowning actions are really ridiculous,” China’s Liaison Office said in a statement.

Luo, the most senior mainland political official in Hong Kong who took up the post earlier this year, said U.S. sanctions on him indicated the he was doing what he “should be doing for my country and Hong Kong.”

Speaking at a media conference in July before sanctions were imposed on her — and where she announced the postponement of elections due to the worsening coronavirus situation — Lam said she would “laugh off” any sanctions against her.

“As far as I am concerned I do not have any assets in the United States nor do I long to move to the United States, so it’s neither logical or reasonable for the sanctioning suggestion,” she said.

The sanctions will freeze any U.S. assets of the 11 officials and prohibit them from carrying out business in the country, while barring Americans from doing business with them.

“The United States stands with the people of Hong Kong and we will use our tools and authorities to target those undermining their autonomy,” Treasury Secretary Steven Mnuchin said in a statement Friday.

Hong Kong’s new security law has drawn condemnation from the U.S. and other Western governments, many of which have suspended extradition treaties with Hong Kong as a result.

Critics of the law say it erodes basic freedoms guaranteed when Hong Kong returned to Chinese rule from Britain in 1997, while supporters say it restores stability after a year of often violent anti-government unrest.

Hong Kong authorities have since issued arrest warrants for six pro-democracy activists who have fled the city.

The issue has contributed to a worsening of China—U.S. relations, already strained over trade, the coronavirus and disputes over the South China Sea.

On Wednesday, China’s ambassador to the U.S. said Beijing did not want to see a Cold War break out between the two powers, urging both to work to repair relations under “unprecedented” strain.

The order will also apply to the messaging app, WeChat, which is widely-used across East Asia and among overseas Chinese as a medium for financial transactions, games and retail services — it is owned by one of China’s largest tech companies, Tencent.

Trump’s order, which Chinese state media blasted as a “smash and grab” and warned of consequences, is set to come into effect in 45 days.