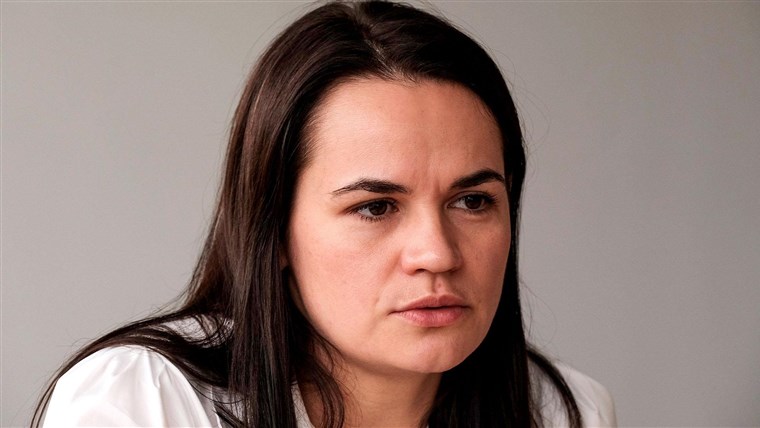 A leading Belarusian opposition figure has been detained while trying to cross into neighboring Ukraine, Belarusian state media reported Tuesday after weeks of protest over a disputed election result.

Concerns over Maria Kolesnikova’s whereabouts grew on Monday, with independent Belarusian media outlet Tut.by reporting that she was kidnapped and forced into a car by masked men in the center of capital Minsk.

After the news of her disappearance broke, her aides said Monday she was not answering her phone and they were worried about what may have happened to her.

Foreign ministers of the U.K., Germany and Lithuania, have all said they were concerned about Kolesnikova’s disappearance.

On Tuesday, Belarusian state news agency Belta cited spokesman for the country’s border services, Anton Bychkovskiy, as saying Kolesnikova was detained when she and two of her allies were trying to cross the border into Ukraine early on Tuesday.

Bychkovskiy said the trio passed passport control and moved towards Ukraine in a car, which started speeding up upon encountering more border guards. He said Kolesnikova was “pushed out of the car” while her associates continued driving towards Ukraine, without elaborating.

He said her two associates have crossed into Ukraine, but Kolesnikova was apprehended.

NBC News has contacted Belarusian border services and President Alexander Lukashenko’s office for further comment, but did not hear back.

In a press release issued on Tuesday, Ukraine’s border services confirmed that Kolesnikova did not go through border control to get into Ukraine, while her two associates did make it across.

Ukrainian officials also said Kolesnikova did not want to leave the country, contradicting the Belarusian account that she was trying to flee the country.

“They were trying to forcibly expel them from the territory of Belarus,” Ukrainian deputy interior minister Anton Geraschenko said in a daily press briefing on Tuesday, accusing Belarusian government of trying to smear Kolesnikova.

He earlier told NBC News via a text message that he based his conclusions on the testimony of Kolesnikova’s two associates who were with her and made it into Ukraine, without providing any other details.

Kolesnikova was an aide to Svetlana Tsikhanousakya, who was a runner-up in the presidential election that saw strongman Lukashenko win with a landslide 80 percent of the vote. The outcome sparked mass protests, initially met with a violent crackdown by police.

Tsikhanousakya has since fled to Lithuania. The other opposition leader, Veronika Tsepkalo, also moved out of Belarus out of fear of getting arrested.

Kolesnikova came to prominence when she united with Tsikhanousakya and Tsepkalo ahead of the election, urging people to vote Lukashenko out.

She has refused to leave Belarus despite government crackdown, attending many protest rallies.

Kolesnikova was also one of the key members of the coordination council launched by Tsikhanousakya out of exile to negotiate a peaceful transition of power with Lukashenko, who they say falsified election results.

Lukashenko has been condemned by western leaders for his crackdown on protesters, with the European Union threatening sanctions. But he has received support from Russian President Vladimir Putin, who promised military aid if required.

Oksana Parafeniuk is a freelance producer and photographer based in Kyiv, Ukraine.