‘We are in the second wave’: Europe on edge as cases spike

Home WORLD NEWS ‘We are in the second wave’: Europe on edge as cases spike 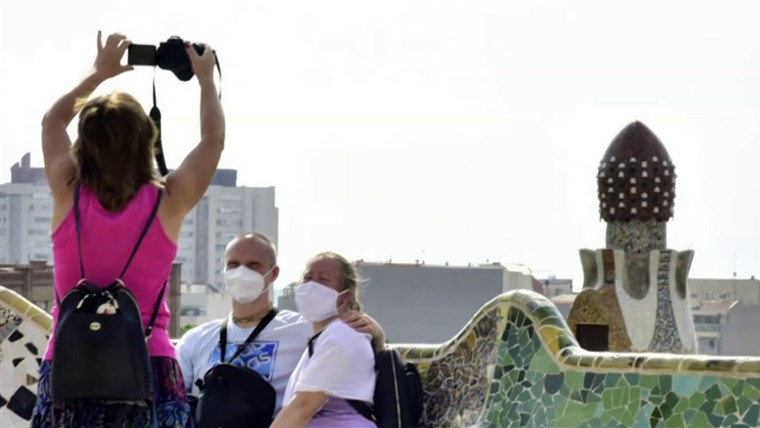 PARIS — Cases of the coronavirus are spiking in France, Spain and the United Kingdom even as social distancing restrictions ease, stoking concerns among doctors and policymakers about a “second wave” in countries still reeling from the pandemic’s first wave.

France set a record Friday after health authorities reported 8,975 new cases, far higher than the previous record of 7,578, which the was set March 31 at the height of the pandemic.

In the U.K., new infections soared to nearly 3,000 in one day — the country’s biggest jump since May. And Spain had nearly 9,000 new cases Thursday.

Outside Europe, India displaced Brazil to take second place after the United States in terms of coronavirus infections, with 90,082 new cases whose numbers are expected to grow.

Unlike the pandemic’s punishing first round in the spring, France’s troubling rise in new cases has yet to cause a significant surge in deaths and hospitalizations, a salutary statistic for policymakers who remain determined to press ahead with reopenings of schools and businesses.

There are fewer than 500 COVID-19 cases in French intensive care wards — down from about 8,000 at the height of the crisis, according to the French government.

The new testing has sparked a statistical increase in patients with mild or no symptoms, many of them younger, healthy people such as Feyrouz Hassam, 30, a PR manager at an advertizing agency, and her friend Alain Jaber, 28, her boyfriend who is a model.

The two took tests last week at a crowded free testing center in central Paris despite neither suffering from symptoms. The testing site, housed in a large tent in front of Paris’s stately Hôtel de Ville, is among seven such centers in the French capital.

Dr. Christophe Chevassu, a general practitioner for SOS Medecin, said the center administers about 700 tests each day, mostly to young people. Hassam’s boss had asked her to take the test after one of her colleagues tested positive, while Jaber sought a test simply because “it’s simple.”

“Obviously, we are already in the second wave,” Hassam told NBC News. “It’s our responsibility to be careful but I don’t think there’s going to be a huge second wave. Hopefully not.”

On the official level, such optimism remains cautious. France has recently made mask-wearing compulsory in public in most major cities, with violations punishable by a fine. But policymakers have all but ruled out the kind of blanket lockdowns that crushed France’s economy in the spring.

“I cannot envision a general lockdown,” French Health Minister Olivier Veran told BFM TV on Saturday. “The lockdown was a lid on an overflowing cooking pot.”

He and other European health officials have warned that the effects of the increase could be delayed — with more cases and less social distancing, a surge in deaths and hospitalizations could be only a matter of time.

“We have seen in other countries across the world and in Europe this sort of rise in the cases among younger people lead to a rise across the population as a whole,” U.K. Health Secretary Matt Hancock said. “So, it’s so important that people don’t allow this illness to infect their grandparents and to lead to the sort of problems that we saw earlier in the year.”

Yet, the disease itself remains mired in uncertainty. As long as the death and sickness levels remain constant — even as cases rise — it’s unclear whether the hand-wringing over an anticipated second wave is justified.

Even with France’s ramped-up testing, only about 3 percent of tests come back positive, Toubiana said, a statistically insignificant figure that’s consistent with the testing’s margin of error.

“We have another epidemic. We have an epidemic of panic, of fear,” Toubiana said. “So this fear and panic makes us not reflect on what is really happening.”