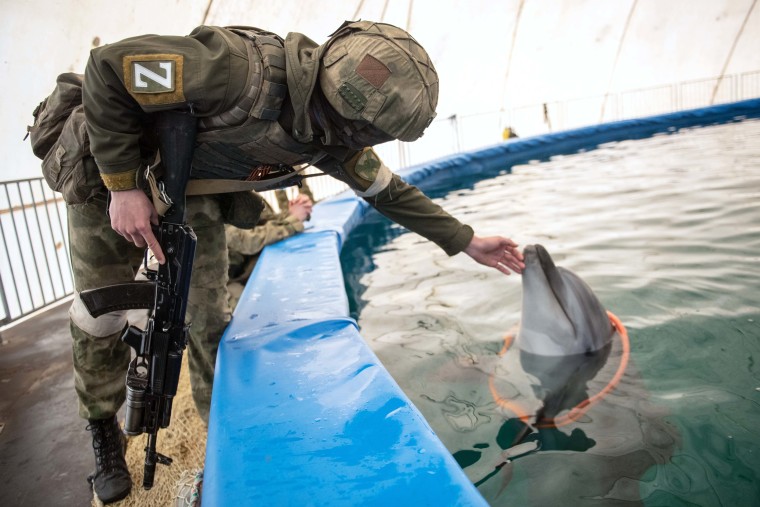 ISTANBUL — Mass dolphin deaths have scientists worried that pollution from Russia’s war in Ukraine could have lasting impacts on ecosystems in the region.

More than 100 dolphins have washed up on the Turkish coast since February, a high number compared to previous years, according to Uğur Özsandıkçı, lead researcher of marine life at Sinop University, in a Turkish city south of Crimea. Dolphins have also recently been spotted acting unusually in other countries sharing the coastline. Local marine biologists suspect that a driving cause is likely noise pollution from warships in the north.

The low-frequency sonar of warships and submarines directly interferes with dolphins’ echolocation, said Pavel Goldin, a marine biologist specializing in dolphins at the Schmalhausen Institute of Zoology in Ukraine. Unable to navigate, the dolphins cannot identify prey and can therefore starve. They can also get confused and panic, accidentally swimming into rocks or onto shore. Some might also swim into naval mines, triggering their explosion, or could be killed by live fire.

A full investigation into the causes and scope of the recent dolphin deaths could take months or years, with much of the coastline inaccessible to researchers because of the war. Still, these deaths and other war-related pollution could create a “crisis in biodiversity,” according to the Turkish Marine Research Foundation.

Satellite images published last month suggest that Russia may be using bottlenose dolphins to guard its Sevastopol base, but the claims were never confirmed. Ukrainian media reported in 2018 that most of the combat dolphins that Russia had seized at the Crimean base had died, likely of starvation.

“It is hard to say if they can be protective at all, because dolphins look more like victims, like targets in this war,” Goldin said. These dolphins would be even more vulnerable to naval radars than they were in 2014 when Russia annexed Crimea, with Russian warships in Sevastopol now more numerous and running for longer periods of time.

The noise pollution can also disturb many fish populations, Goldin said, and cause them to migrate far away. This disrupts the local ecosystem, as does the sudden death of dolphins, which are at the top of the Black Sea food chain. Their death could threaten entire subpopulations, and it could take many years before their population is renewed.

Özsandıkçı conducted a necropsy on four common dolphins that showed that most were tangled in fishing nets. He sent more carcasses to Ankara for further study to better understand why they were driven into the nets in the first place.

“The common dolphins may have swum from north to south, but it is very difficult to research this under these conditions,” he said. “We usually work with Ukrainian colleagues, but we haven’t heard news from them.”

Dolphins have also been found stranded en masse in Bulgaria and Crimea, showing behavior atypical of their species. Green Balkans, a Bulgarian rehabilitation center, reported that a lone common dolphin was found in a harbor in April, whereas common dolphins rarely break from their schools and usually stay in the open sea far from the coast. Also, 52 harbor porpoises were found tangled in fishing nets in April, compared to 10 that were found last year. Bottlenose dolphins are usually too big and nimble to be caught, but Green Balkans said eight were found dead last month off the coast of Bulgaria.

In some cases, live dolphins that approached the shore were also visibly weak or dehydrated and showed no sign of infection or entanglement. While Crimea is inaccessible to Ukrainian conservationists, people have reported mass strandings of common dolphins there too, according to Goldin. He said that these cases suggest acoustic trauma.

Several scientific groups have raised the alarm over growing pollution in the Black Sea caused by sabotaged infrastructure, oil spills from sunken warships and chemical runoff from ammunition. Researchers and organizations from 75 countries signed an open letter in March on the environmental harm of the war, including potential nuclear disaster. Ukrainian scientists are still assessing the level of ecological damage caused by the war.

The Black Sea itself is already highly fragile from decades of heavy industrial and agricultural activity in the north, overfishing in the south and a makeup that leaves little oxygen in its waters and high levels of poisonous hydrogen sulfide.

The Commission on the Protection of the Black Sea Against Pollution, which oversees cleanup of the sea, did not respond to requests for comment.

Still, Goldin said that he doubts that the pollution could be as harmful for dolphins as military sonar. He said he is worried about another mass stranding after reports from Ukrainian officials that Russian ships and submarines were spotted at open sea in the northwest, where common dolphins usually feed.

“It’s not a matter of one event,” he said. “This is the primary problem, because the war is not over. It’s every day.”