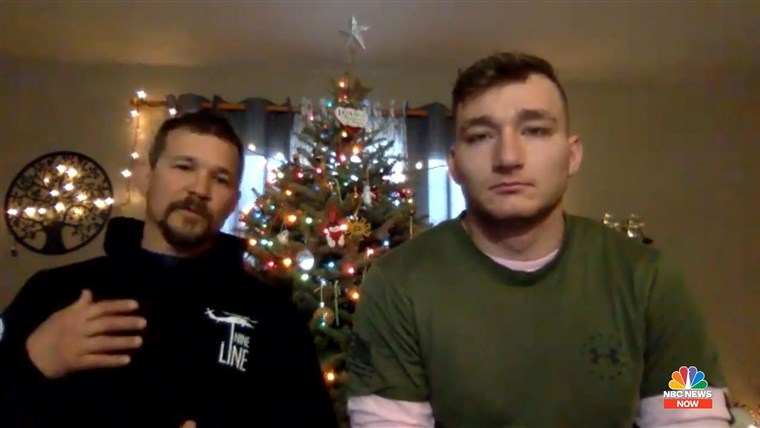 KABUL, Afghanistan — Mir Hatim says he spent the early hours of Jan. 10 sifting through the bombed-out house of his relatives, searching for their bodies in the rubble.

“Everyone there was crying,” Hatim, 29, told NBC News by phone in the days after a nighttime Afghan airstrike killed and injured civilians in the rural Nimroz province around midnight on Jan. 9. “We witnessed one of the most savage acts by the government,” he said.

Hatim said 18 of his relatives, all members of the same family, were killed in the airstrike in Manzari village in Khashrod district overnight Saturday. The next day, he says he and others took their remains to the provincial capital, Zaranj, on the border with Iran, to show local officials that women and children were among those killed.

“Why did they attack us, we’re not terrorists or Taliban fighters … what’s our crime?” he said.

The Afghan Ministry of Defense tweeted Monday that a strike in the district had targeted a Taliban hideout, and said that nine Pakistani terrorists and five local Taliban militants had been killed, and six others had been injured. An investigation into allegations of civilian casualties was underway, it added.

Baz Muhammad Nadir, chairman of the provincial council, said the Afghan air force had targeted two villages in Khashrod district on the night of Jan. 9. NBC News called the ministry several times but could not get through to establish which airstrike it referred to in the statement.

The incident comes as the U.S.-backed Afghan government and Taliban insurgents are engaged in historic talks to end the country’s decadeslong conflict. Last week, the two sides embarked on a second round of peace negotiations in the Qatari capital of Doha.

Local lawmaker Gul Ahmad Noorzad, who represents Nimroz province in Afghanistan’s parliament, confirmed that 18 people from the same family were killed in the airstrike in Manzari village, including women and children. NBC News was not able to reach the provincial governor Maryali Ahadi who, according to Reuters, said those killed were Taliban fighters.

Afghan President Ashraf Ghani said Monday he was “deeply saddened” by the news that the airstrike in Nimroz province had killed and injured civilians, and said he had instructed defense and security officials to conduct a thorough review.

Strikes by the U.S.-backed and trained Afghan military allegedly killed or wounded more than 340 civilians in the first three quarters of last year.

The Taliban have also denied targeting civilians — though the United Nations estimated that they were responsible for 45 percent of civilians killed or injured in the first three quarters of last year, compared to 23 percent attributed to Afghan forces.

In general, the country remains among the deadliest places in the world to be a civilian, with the U.N. documenting more than 100,000 civilians killed or injured in the 10 years after 2009, when it began systematically recording the war’s impact on civilians.

“Will peace come to graveyards and abandoned cities and villages?” Shaharzad Akbar, the chairperson of the Afghanistan Independent Human Rights Commission, tweeted when news broke Jan. 10 of the bombing. “Stop the bloodshed.”

On Tuesday, the constitutionally-mandated rights watchdog said its findings showed that 18 civilians, including three women and 11 children, were killed in the bombing.

In Nimroz province, a local elder said civilians wait in fear of another attack.

“Even a shining star makes them feel like an airplane will bomb them again,” Abdul Basir Khashudi, who is from Khashrod district and said he knew the victims of the airstrike, said by phone. “They are in pain and are scared.”

Ahmed Mengli reported from Kabul and Saphora Smith from the U.K.