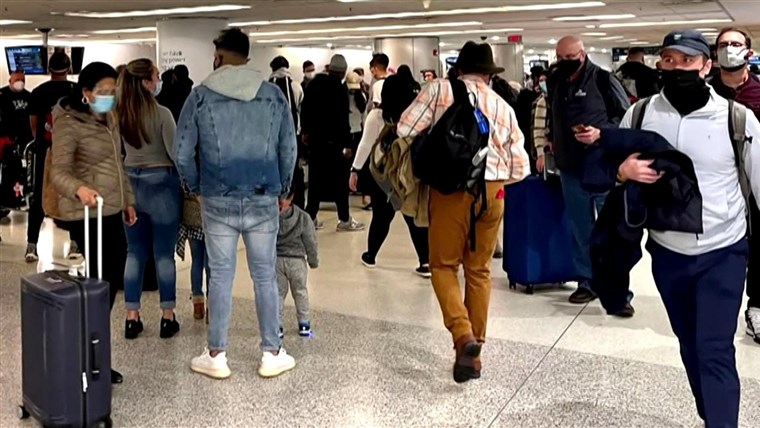 LONDON — Dozens of countries have effectively tried to seal off the islands of the United Kingdom in a drastic attempt to halt the global spread of a new coronavirus variant.

But it may be too late, some experts warn.

The new variant — apparently so infectious it prompted Prime Minister Boris Johnson to effectively cancel Christmas for millions — has already been detected in places as far flung as Denmark, the Netherlands, Belgium, Italy, Iceland and Australia.

A similar variant, which emerged separately but shares the same mutation in its spike protein, has been detected in South Africa, according to Nextstrain, an open-source project that tracks genetic codes in real time.

Some believe the U.K. variant is likely already in the United States, where the federal government has so far resisted calls to tighten the already strict travel restrictions on Europe.

Ultimately, travel bans might slow down the new variant. In the long run, though, many scientists think this strain, or one like it, will simply out-compete the others in circulation and become the dominant version of the virus around the world.

“I’ve no doubt that it’s coming,” said Hajo Zeeb, a professor at Germany’s Leibniz Institute for Prevention Research and Epidemiology.

“From what we’ve learned about the virus, it is going to be hard to contain,” he added, “and I don’t think it’s possible to stop it from spreading internationally.”

Dr. Anthony Fauci, America’s top infectious diseases expert, is among those who believes the new variant has likely already arrived on American shores. He says there is not enough evidence to advise the White House to enforce additional travel restrictions above what President Donald Trump imposed during the early weeks of the pandemic.

Trump banned any foreign nationals who have been to Europe in the past 14 days, but that doesn’t apply to U.S. citizens, legal residents or their family members under the age of 21. An average of six flights still operate between London and New York every day.

Dr. Emma Hodcroft, a molecular epidemiologist and co-developer of Nextstrain, is among those who believes it might be possible to contain the new variant. But international restrictions will do little good if governments continue to fail to contain the virus domestically.

Hodcroft says governments would need to improve their “test, trace and isolate” systems — something most of the West has failed to do this year — and perhaps even develop targeted PCR tests that can quickly detect the new variant.

“I don’t think it’s too late, but only if places start taking action now and have a plan,” she said.

There is much scientists don’t know — that’s why they’ve been urging caution lest this variant spreads panic faster than the virus itself.

Viruses often mutate and this coronavirus has done so several times this year. There is no evidence it is more deadly nor that vaccines will be any less effective against it.

BioNTech, which along with Pfizer developed a Covid-19 vaccine that is being administered in the U.S. and U.K., is doing tests to see whether its efficacy will be impacted.

“There is no reason to be concerned or worried until we get the data,” BioNTech Chief Executive Ugur Sahin told a news conference Tuesday.

What does concern experts and governments is that this variant appears to have ripped through London and the southeast of England at alarming speed.

That’s what has earned Britain the moniker of “plague island” — an unhappy nickname for a place usually eager to trumpet examples of its own exceptionalism.

Johnson has reimposed a lockdown on some 38 million of his people and more than 40 countries have restricted travel from the U.K. One of them is France, a bottleneck through which much of British trade passes. This has caused a de facto blockade leaving at least 1,500 trucks stranded around the main English port of Dover.

However, for all the bad PR, it’s unclear whether this variant actually mutated in the U.K., or it was just detected there first thanks to the country’s world-leading genomic analysis capabilities.

Modelling by scientists advising the British government projected that it is 71 percent more transmissible than others.

Though there is some margin for error around this figure, the British government’s New and Emerging Respiratory Virus Threats Advisory Group, or Nervtag, looked at four different types of data and said in a briefing Friday that it was “moderately confident” there was a “substantial increase in transmissibility.”

Though they have not confirmed it, the advisory group believes there is evidence children could be more susceptible to it than other strains.

“There is a hint that it has a higher propensity to infect children,” Neil Ferguson, a professor and infectious disease epidemiologist at Imperial College London who also sits on Nervtag, told a briefing Monday. “We haven’t established any sort of causality on that, but we can see it in the data. We will need to gather more data to see how it behaves going forward.”

It’s early indications like this that have prompted other countries to take such drastic maneuvers. On Tuesday the European Commission, the E.U.’s executive branch, recommended that the 27 E.U. member states should lift any unilateral travel bans on the U.K. and instead discourage all but essential journeys.

And Dr. Ashish Jha, dean of Brown University’s School of Public Health, said that while such bans “would slow it down, I doubt it would keep it out of” the U.S.

“I would be surprised if we didn’t have a few of those cases already in this country. That’s the nature of global pandemic,” Jha told TODAY on Tuesday. “I don’t think ultimately we will be able to keep this strain out of the U.S.”