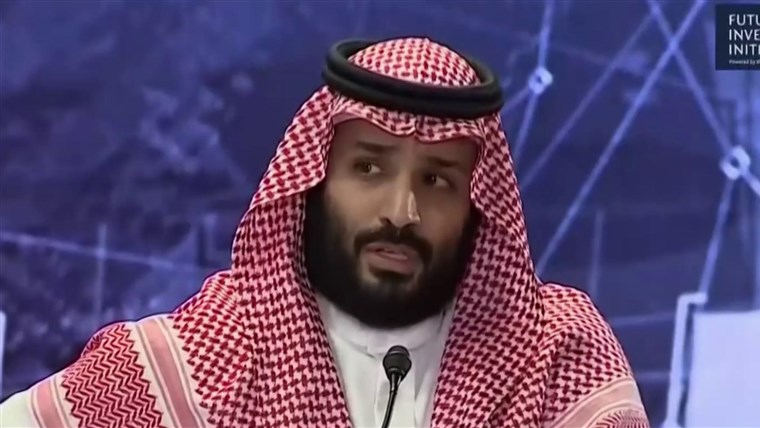 WASHINGTON — A long-awaited American intelligence report made public Friday concludes that the de facto leader of Saudi Arabia approved the gruesome political killing of a dissident journalist who lived in Virginia and wrote for the Washington Post.

While that overall conclusion by the CIA and other agencies about Crown Prince Mohammed bin Salman was first reported two years ago, its official publication on U.S. government letterhead shines a spotlight on the dilemma facing President Joe Biden, who has emphasized the importance of human rights in foreign policy but is not prepared to cut ties with a key American ally.

Said the report, “We base this assessment on the Crown Prince’s control of decision-making in the Kingdom, the direct involvement of a key adviser and members of Mohammed bin Salman‘s protective detail in the operation, and the Crown Prince’s support for using violent measures to silence dissidents abroad, including [journalist Jamal] Khashoggi.”

The document released Friday is a sparse, page-and-a-half executive summary of a larger classified intelligence assessment.

The confidence levels assigned to the judgments — generally expressed as high, moderate or low — appear to have been blacked out.

The analysis doesn’t cite particular intelligence, but offers broad analytical statements. For example, it notes that “since 2017, the crown prince has had absolute control of the Kingdom’s security and intelligence organizations, making it highly unlikely that Saudi officials would have carried out an operation of this nature without the crown prince’s authorization.”

And it says the Saudi team sent to kill Khashoggi in Turkey “included seven members of Mohammed bin Salman’s elite personal protective detail, known as the Rapid Intervention Force,” which “exists to defend the crown prince, answers only to him, and had directly participated in earlier dissident suppression operations in the Kingdom and abroad at the crown prince’s direction. We judge that members of the RIF would not have participated in the operation against Khashoggi without Mohammed bin Salman’s approval.”

The crown prince, the assessment says, “viewed Khashoggi as a threat to the Kingdom and broadly supported using violent measures if necessary to silence him. Although Saudi officials had pre-planned an unspecified operation against Khashoggi, we do not know how far in advance Saudi officials decided to harm him.”

As it became clear the intelligence assessment would be released this week, the Biden administration sought to balance American ideals and American interests, emphasizing a “recalibration” with Saudi Arabia even as officials acknowledged they would still be doing business with a key partner in the fights against terrorism and Iran.

“We’ve made clear from the beginning that we are going to recalibrate our relationship with Saudi Arabia,” White House spokeswoman Jen Psaki told reporters this week.

In a statement, Sen. Mark Warner, D-Va., chairman of the Senate Intelligence Committee, said, “For too long, the United States failed to hold Saudi Arabia accountable for the brutal murder of journalist, dissident, and Virginia resident Jamal Khashoggi. I’m encouraged to see the new administration taking steps to rectify that by releasing this long-overdue congressionally mandated report into his killing.”

Secretary of State Tony Blinken spoke by phone with his Saudi counterpart Thursday, after which Biden had a call with King Salman, the father of Crown Prince Mohammed bin Salman.

The signal was clear: The Biden administration wants to keep MBS, as he is known, at arms length. How that will work going forward remains to be seen. King Salman is 85, and MBS, at the moment, is his heir.

In November 2019 Biden promised to make the Saudis “pay” for the killing of Khashoggi, as he answered a question from Andrea Mitchell of NBC News during a Democratic debate.

“We were going to in fact make them pay the price, and make them in fact the pariah that they are,” Biden said.

But experts say that is not realistic.

“The world economy still needs that Saudi oil, even if we don’t need it here in the U.S. per se, and the Saudis need our military protection, and we don’t want them to lose a war against Iran,” Middle East expert Michael O’Hanlon of the Brookings Institution told CNBC’s Shepard Smith Thursday evening. “We are not going to make the Saudis a pariah nation, if what you hear by that word, as I do, is North Korea or Iran itself or some other extremist government.”

O’Hanlon added, “The two sides need each other.”

Still, the decision to release the declassified intelligence summary — which had been mandated in a law passed by Congress and sought in a Freedom of Information Act lawsuit — represents a clear break by Biden with former President Donald Trump’s policy of equivocating about the Saudi state’s role in a brutal killing that was widely condemned by members of Congress, journalists and a U.N. investigator.

The president confirmed to reporters late Wednesday that he had read the intelligence report.

Khashoggi, 59, was a Saudi citizen working as a Washington Post columnist when he was lured to the Saudi consulate in Istanbul on Oct. 2, 2018, and killed by a team of intelligence operatives with close ties to the crown prince. His body was dismembered in part with a bone saw, American officials have said, and the remains have never been found.

After first denying the killing, the Saudi government changed course and asserted that Khashoggi was killed by accident as the team sought to forcibly extradite him. The Saudis say that the team acted on its own and that the crown prince was not involved.

Eight men were convicted in a trial that international observers called a farce; five got the death penalty. Their sentences were commuted to 20 years after they were allegedly forgiven by Khashoggi’s relatives.

Agnes Callamard, who investigated the killing for the U.N., accused Saudi Arabia of a “deliberate, premeditated execution, an extrajudicial killing for which the state of Saudi Arabia is responsible under international human rights law.”

The CIA presented the White House with its assessment in 2018, but it did not appear to change Trump’s friendly relations with Saudi Arabia and with the crown prince in particular.

Trump bragged in 2019 that he had protected MBS from congressional scrutiny in recorded interviews with journalist Bob Woodward.

“Do you believe that he did it?” Woodward asked.

“No, he says that he didn’t do it,” Trump replied.

Biden has ended American support for Saudi Arabia’s war in Yemen, but he has not fully severed the military relationship with an important Middle East ally and counterterrorism partner.