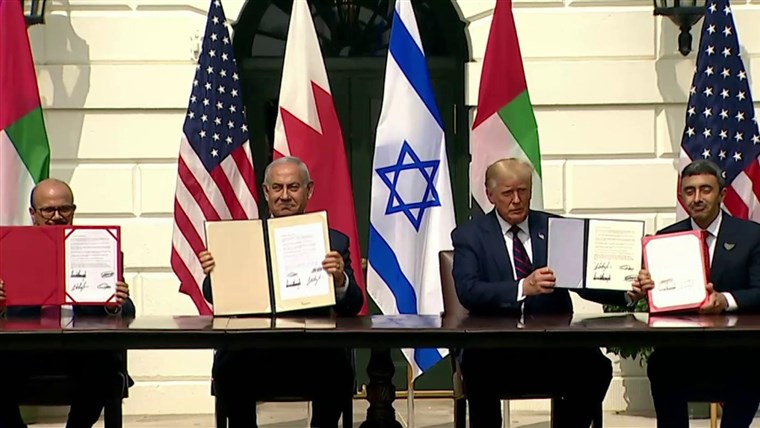 On Israel’s Army Radio, Education Minister Yoav Gallant congratulated Netanyahu on the “remarkable achievement” but did not say bin Salman and Netanyahu had met.

Netanyahu declined to comment on the reports Monday, saying only: “I never talked about these kinds of things, and I will not start now. I’m committed to strengthening Israel.”

The State Department also declined to comment. NBC News was not able to confirm that Netanyahu and the crown prince had met.

Saudi Foreign Minister Faisal bin Farhan, meanwhile, denied that a visit took place, saying in a tweet: “no such meeting occurred. The only officials present were American and Saudi.”

Rumors of thawing relations between the two Middle East powers have been swirling for years as the countries have seen their security interests overlap, with both viewing Iran as an existential threat.

If Saudi Arabia, the birthplace of Islam, were to accept Israel, it would be a major signal to other Arab and Muslim nations that relations with Israel are no longer off-limits.

Pompeo met Sunday with bin Salman in the new Saudi city of Neom, on the Red Sea, as part of an international tour, likely to be his last as secretary of state. Just after landing, Pompeo said in a tweet that he looked forward to “discussing our efforts to counter terrorism, deter Iran’s malign influence, promote respect for human rights, and expand our two-way trade relationship.”

Journalists traveling with Pompeo were left on the tarmac at the airport and did not accompany him to the meeting.

The flight-tracking website FlightRadar24.com showed a Gulfstream IV private jet took off from Tel Aviv on Sunday night and flew south along the edge of Egypt’s Sinai Peninsula before turning toward Neom and landing. The flight took off from Neom over three hours later and followed the same route back to Tel Aviv.

“It seems as though the Saudis are preparing to normalize with Israel,” said Daniel Shapiro, who was U.S. ambassador to Israel from 2011 to 2017 and is a visiting fellow at the Institute for National Security Studies in Tel Aviv.

“They’re preparing their own public. They have already given at least tacit support for the UAE and Bahrain normalization agreements. They have created a narrative in their own media about the failings of the Palestinian leadership. So it seems to be a matter of time,” he said.

After the deal with the UAE, Saudi Arabia allowed Israeli airliners to fly over its territory. Before the agreements, Israel had relations with only two Arab countries — Egypt and Jordan.

Saudi Arabia has said that it remains committed to peace on the basis of the Arab Peace Initiative, which called for normalization of ties with Israel on the condition that Israeli forces were withdrawn from the occupied West Bank, east Jerusalem and the Gaza Strip.

Palestinians fear that the Arab world’s normalization of ties with Israel will weaken their push for an independent state.

Pompeo has made stops in Israel, where he met with Netanyahu and Bahrain Foreign Minister Abdullatif bin Rashid Alzayani in Jerusalem. He also became the first secretary of state to visit an Israeli settlement in the West Bank.