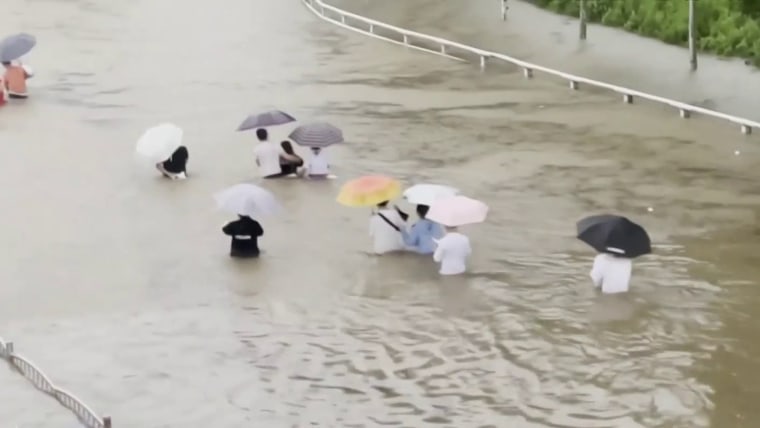 HONG KONG — Tens of thousands of people were evacuated from their homes in the city of Shanghai early Sunday after Typhoon In-fa barreled into China‘s east coast.

Days after unprecendented flooding devasted huge swaths of the country’s center, forcing more than 1 million people from their homes, around 330,000 residents were evacuated from Shanghai’s Fengxian District the state-run China Daily newspaper reported.

After In-fa made landfall at about 12:30 p.m. local time (12:30 a.m. ET) the Zhejiang province was buffeted with wind speeds of up to 60 mph, state TV reported, citing the national weather agency. Forecasters predicted between 10 to 14 inches of rain.

Authorities in Shanghai, a city of around 26 million people, ordered the public to stay indoors and canceled inbound and outbound flights from both the Shanghai Pudong and Shanghai Hongqiao international airports. More flights will likely be canceled on Monday, state TV reported.

The nation’s commercial hub also closed many services and businesses, and slowed or suspended subway trains as rain battered the region.

“We will make every effort to ensure the safety of people’s lives and property, and do everything to minimize disaster losses, and strive to achieve the goal of no deaths and few injuries and economic losses,” Yuan Jiajun, the Zhejiang province Communist Party secretary said during an inspection of preparations on Saturday, state media reported.

The Meteorological Administration said In-fa was moving at a speed of 9 mph.

The Zhejiang emergency management department upgraded its typhoon response to the highest level on Saturday, forcing the closure of schools and markets. Road traffic in certain areas was suspended.

In-fa hit as China is still reeling from flooding that killed at least 58 people in central China after record rains hit the major city of Zhengzhou on Tuesday, washing away vehicles and leaving people stranded.

At least 12 people were killed by the rapidly rising waters in the subway system, several buildings lost power and the streets were filled with debris and mud, prompting major rescue and cleanup operation.

Direct economic losses were estimated at 13.9 billion yuan ($2 billion), the AP reported cutting the Xinhua news agency. It added that more than 3,800 houses collapsed across the province and 920,000 people were evacuated from their homes.