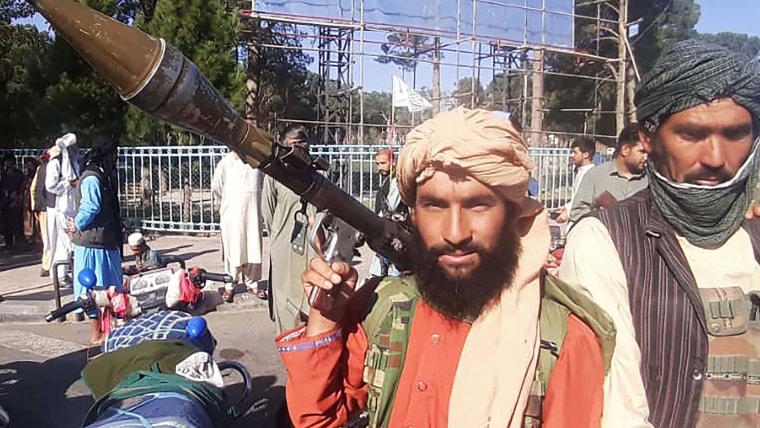 KABUL, Afghanistan — The Taliban captured two major Afghan cities Friday, according to the militant group and local officials, as vital hubs across the country collapsed and the United States rushed to evacuate its citizens.

The seizure of Kandahar in the south and Herat in the west mark the biggest prizes yet for the Taliban, who have taken a series of provincial capitals in a major blitz as U.S. troops pull out after two decades of war.

A Taliban spokesman told NBC News the group’s fighters had taken both cities, capitals of their respective provinces by the same name.

Gul Ahmad Kamin, a member of parliament from Kandahar, confirmed early Friday that the city had fallen.

In Herat, local member of parliament Masood Karokhai said the Taliban had taken control of the city after launching an offensive from various locations. He said the region’s airport and military base outside the city were still controlled by government forces.

The capture of Afghanistan’s second- and third-largest cities carried symbolic as well as strategic importance. Kandahar is the birthplace of the Taliban’s so-called Islamic emirate, while the insurgents also detained veteran militia commander Mohammad Ismail Khan, known as “the Lion of Herat.”

Khan has been a force to be reckoned with for decades in Afghanistan. One of the country’s most prominent warlords, he fought the occupying forces of the former Soviet Union in the 1980s and later took up arms against the Taliban regime as part of a U.S.-backed alliance that helped topple it in 2001.

The Taliban said he and others had surrendered under a deal guaranteeing them amnesty.

Jaelany Farhad, a spokesperson for Herat’s provincial government, confirmed that the province’s governor and top security chief were detained along with Khan.

One Herat resident, who did not want to be named because he feared retribution from the Taliban, said the insurgents were all over the city. “They just stare at you,” he wrote via WhatsApp on Friday. “Holding their guns.”

Afraid the fighters might search his house and find evidence that he worked for a foreign government, he said he desperately wants to make it to Kabul but doesn’t know how to leave the city.

“[I’m] counting down my last times in this world,” he said. “It makes me feel that God has betrayed me for being a citizen of such a country.”

As the Taliban’s stunning battlefield advances continued, Washington said Thursday that the U.S. would send in 3,000 troops to help secure the exit of most staff from the U.S. Embassy in Kabul. The move comes “in light of the evolving security situation,” State Department spokesman Ned Price told reporters, citing the Taliban’s advances and rising violence.

The evacuation comes at the end of a rapid U.S. troop withdrawal launched in April, only weeks before the last remaining American forces were due to depart under an Aug. 31 deadline set by President Joe Biden.

Separately, Britain said about 600 troops would be deployed on a short-term basis to support British nationals leaving the country, and Canada is sending special forces to help evacuate its embassy.

The move to scale back the U.S. Embassy staff also comes after a warning to American citizens to leave the country immediately.

The White House has come under criticism from some lawmakers and former U.S. officials for how it has managed the troop pullout, with critics saying the administration should have had more detailed plans in place to sustain Afghan security forces and to evacuate Afghans who assisted the U.S. government.

The rapid fall of provincial capitals deals a heavy blow to the crumbling Afghan government forces who have struggled to contain the Taliban’s offensive as U.S. and NATO troops withdraw. The group has swept through the country faster than the U.S. military expected, three defense officials said, and at a pace that has even surprised some of the fighters themselves.

The militant group’s advance has sent large numbers of Afghans fleeing their homes, seeking refuge both from the fighting and the prospect of the Islamist regime that ruled the country before 2001 being reimposed. While in power, the Taliban enforced a strict interpretation of Islam under which women were largely invisible in public life.

While Kabul itself isn’t directly under threat yet, the losses and the battles elsewhere further tighten the grip of the resurgent Taliban, who are estimated to now hold over two-thirds of the country and continue to press their offensive.

Many of the provincial capitals seized by the Taliban are in the country’s northeast corner, pressuring Kabul from that direction as well, with Badghis province the latest to fall Friday according to local officials.

Secretary of State Antony Blinken and Defense Secretary Lloyd Austin spoke with Afghan President Ashraf Ghani on Thursday and told him the U.S. “remains invested in the security and stability of Afghanistan in the face of violence by the Taliban,” according to the State Department.

But, as diplomats met in Doha, Qatar, the success of the Taliban offensive called into question whether they would ever rejoin long-stalled peace talks with Ghani’s government.