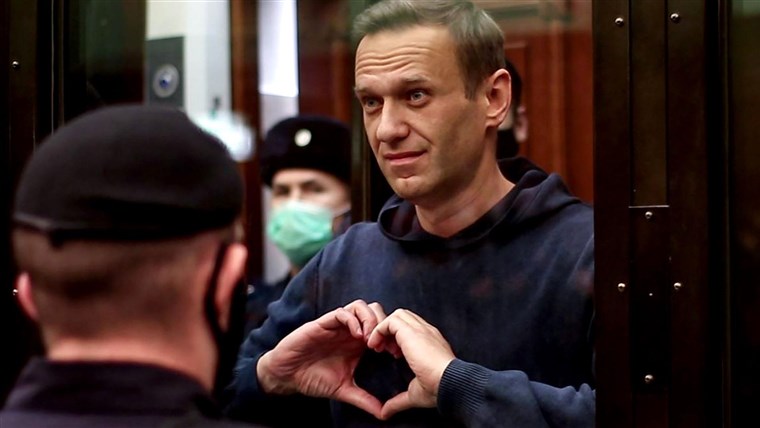 The U.S. and the European Union announced coordinated sanctions on Russia Tuesday for the poisoning of Russian opposition leader Alexei Navalny and his arrest and detention that followed.

Senior U.S. administration officials told reporters during a briefing call ahead of the public release of the measures that the U.S. is adopting the new sanctions, export restrictions and visa restrictions on Russia following an intelligence community assessment on the poisoning of Navalny that determined with “high confidence” that officers with Russia’s Federal Security Service (FSB) used a nerve agent to poison him.

The U.S. is sanctioning seven senior members of the Russian government, including FSB director Aleksandr Bortnikov, as well as 14 entities that are involved in the chemical and biological industrial base in Russia, officials said.

The sanctions were the first to target Moscow since Joe Biden became president and opened a comprehensive review of U.S.-Russia policy, including the Kremlin’s actions against Navalny, interference into the U.S. election, the Solar Winds hack and reported bounties offered to Taliban-linked groups to target U.S. forces in Afghanistan.

The officials said these actions in response to the Navalny poisoning are the beginning of the administration’s actions against Russia as President Biden’s review of specific actions by Moscow continues. The U.S. response to those other three issues are coming “sooner rather than later,” one senior administration official said.

“Today is the first such response, and there will be more to come,” the official said.

At the same time the officials insisted the U.S. wants to work with Russia where possible, including on Iran and North Korea. “The United States is neither seeking to reset our relations with Russia nor are we seeking to escalate,” the first official said.

Toxicology tests conducted in Germany, France and Sweden and by the Organization for the Prohibition of Chemical Weapons found that Navalny was poisoned with a novel form of the Novichok nerve agent in violation of the international Chemical Weapons Convention. The Kremlin has denied any involvement in the attack.

Upon his return to Russia in January, Navalny was arrested and sentenced to more than two years in jail. He has been transferred to a penal colony just several days earlier.

In a statement released later on Tuesday, Secretary of State Antony Blinken said: “The United States has consistently characterized the legal offensive against Mr. Navalny as politically motivated, an assessment shared by our G7 partners and the European Court of Human Rights. We reiterate our call for the Russian government to immediately and unconditionally release Mr. Navalny.”

The E.U. also took action against Russia for poisoning Navalny last October, restricting travel and freezing the assets of six Russians and designating one entity.

“We’re in many ways catching up to the E.U. and the U.K.,” a senior administration official said, noting that some of the individuals sanctioned by the U.S. had previously been designated by the E.U. “This is making sure we’re all on the same page now.”

Officials described the U.S. moves as designed to send a signal to Russia that such actions will have severe consequences.

E.U. Foreign Minister Josep Borrell told the Atlantic Council last week that Secretary of State Antony Blinken had asked the E.U. to coordinate with the U.S. on the new sanctions.

Since Navalny’s sentence, his associates, many of whom have also been detained, have urged the west to react with harsh sanctions against the Kremlin and people closest to President Vladimir Putin. Biden last month called the jailing of Navalny “politically motivated” and called for his immediate release, without condition.

A United Nations report released Monday found that the attack against Navalny was part of a “wider trend” over several decades of arbitrary and attempted killings of Russian citizens and government critics inside the country and abroad. It also called for an international investigation into Navalny’s poisoning.

There was no immediate reaction from the Kremlin to the new sanctions.

Earlier on Tuesday, Putin’s spokesperson Dmitry Peskov that any new U.S. sanctions over Navalny would not achieve their goal and would only serve to worsen already strained relations.

“No one has cancelled one of the rules of diplomacy — reciprocity,” Lavrov said.