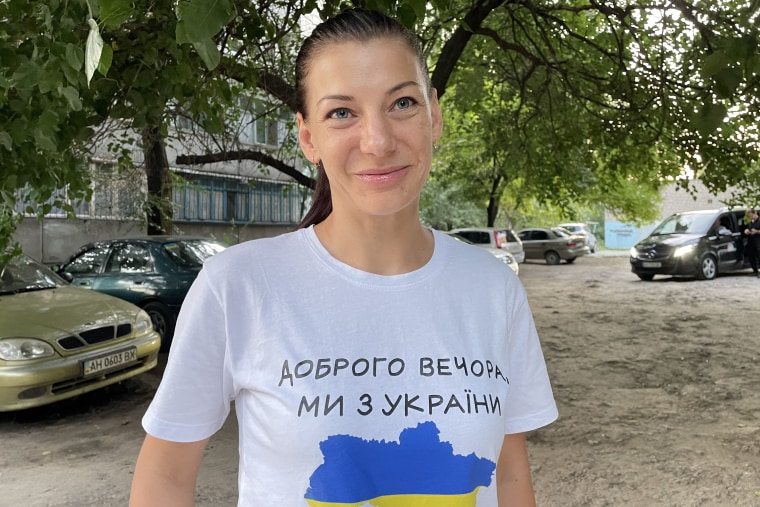 ZAPORIZHZHIA, Ukraine — As Ukraine and Russia trade blame for shelling around Europe’s largest nuclear power plant, one former employee said the consequences could be catastrophic and that she is terrified for her former colleagues at the facility in the town of Enerhodar.

“The mood there is very sad. It is very scary for them to work,” Alyona, 37, told NBC News on Tuesday from the city of Zaporizhzhia, which is still under Ukrainian control.

NBC News isn’t revealing her last name because she still has family in parts of the Zaporizhzhia region under Russian rule and she fears repercussions. Also, her husband is in the Ukrainian army.

Alyona said she stopped going to work as an engineer at the nuclear plant after Russian forces seized it in March and escaped to Zaporizhzhia soon after.

She added that she is still able to call and exchange messages with some of her former co-workers at the plant, which was operated by around 11,000 people before the Russian invasion. The number of staff currently working there is unknown.

“I feel really scared that they are in there,” Alyona said about the Russian forces who had taken control of the plant, adding she did not think they “generally understand what a nuclear station is and how to control it.”

“They are doing such senseless things that it makes me scared,” she said.

Her comments came after Kyiv and Moscow traded accusations over who is responsible for attacks on the Soviet-era site.

Energoatom, Ukraine’s national energy company, said in an update Wednesday that the Russian attacks have caused “a serious risk” to the safe operation of the plant, with monitoring sensors damaged and a possibility of radioactive leaks. It added that the plant remains operational and continues to produce energy for Ukraine. It added the attacks had damaged a high-voltage power line that served the Zaporizhzhia and Kherson regions.

Russia has denied shelling the plant, instead accusing Ukraine’s 44th Artillery Brigade of launching attacks on it from the nearby town of Marganets.

NBC News has not verified the claims of either side.

Amid increasing global alarm, the International Atomic Energy Agency said in a statement Tuesday that available radiation measurements continued to show normal levels at the site, and its experts assessed that there was no immediate threat to nuclear safety. This matched a U.S. assessment, a White House National Security Council official said.

However, IAEA Director General Rafael Grossi said in Tuesday’s statement that the shelling at the plant “breached virtually all the seven indispensable nuclear safety and security pillars,” including those related to a plant’s physical integrity, functioning safety and security systems, staff and external power supplies.

This prompted foreign ministers of the Group of Seven nations on Wednesday to urge Russia to immediately hand back control of the plant to Ukraine. They said in a statement that the staff must be able to carry out their duties “without threats or pressure,” and called for access to all of Ukraine’s nuclear facilities for international monitors.

Moscow has yet to respond.

Alyona said the consequences of a meltdown at the plant would be far-reaching and “much more terrible” than those from the 1986 disaster at the Chernobyl nuclear power plant near the northern Ukrainian city of Pripyat.

Considered to be the worst on record, it required the evacuation of more than 100,000 people living within nearly 19 miles, and the resulting radiation was detected across Europe.

“I don’t even let myself think about that,” Alyona said.

While others said they were hoping for the best, Dmytro Orlov, the exiled mayor of Enerhodar, warned that his community would “cease to exist” should something go wrong.

“This territory would not be livable anymore,” he said.

Morgan Chesky is a correspondent for NBC News.

Erika Angulo is a producer for NBC News based in Miami. Her award-winning work includes coverage of the Oklahoma tornadoes, the U.S.-Mexico drug war, the Chilean miners’ rescue and the 2010 Haiti earthquake.