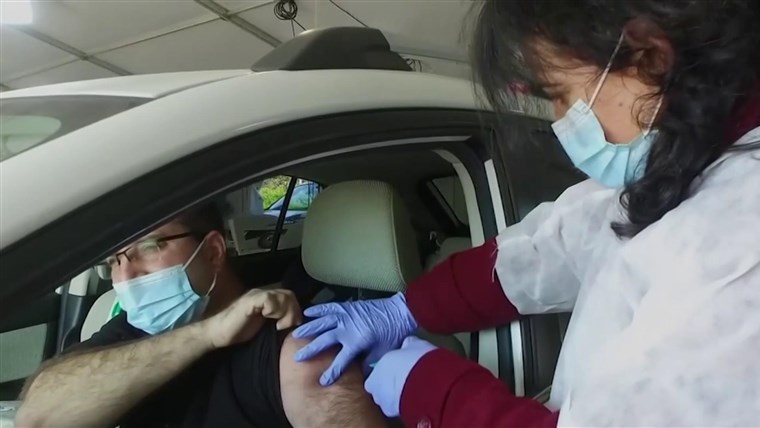 A recent surge in settler violence has seen 14 Palestinians injured — including at least two children — in the occupied West Bank, according to an Israeli human rights group.

Yesh Din, which documents attacks on Palestinians and seeks to end the Israeli occupation, said a large number of intersections in the West Bank had been blocked by settlers Thursday evening and stones had been thrown at Palestinian vehicles.

Jad Alaa Sawfta, a 5-year-old from Tubas city in the West Bank, was injured around 10 p.m. local time (3 p.m. ET) Thursday at the Givat Asaf junction near the city of Ramallah, Palestinians’ administrative base in the West Bank, it added. The group shared a photo of the boy who appeared to have scratches on his cheek and lower lip.

On Jan. 17, an 11-year-old Palestinian girl also sustained injuries to her face as a result of stones thrown by Israeli settlers, according to Yesh Din.

These latest incidents came amid what rights groups say is a rise in settler violence following the death of a young settler, suspected of throwing stones at Palestinians, in a car chase with police in the West Bank on Dec. 21.

The settlers are angry about what they see as bad treatment by Israeli police toward them and over the death of the settler, Ahuvia Sandak, said Lior Amihai, executive director of Yesh Din, adding that in reality settlers often benefited from a lack of law enforcement.

Palestinian Prime Minister Mohammad Shtayyeh on Thursday condemned the attacks in the West Bank and called on President Joe Biden’s administration to do the same.

A spokeswoman for the Israeli police said it was deployed at points of friction in the West Bank in order to prevent violence and to enforce the law. In the past month, a number of cases have been opened relating tooffenses of disorderly conduct and violence against Palestinians and the security forces, she said.

A police investigation into the incident in which the child was injured is ongoing, she added.

In a statement to NBC News, a spokesman for the Israeli Defense Forces said its troops “don’t stand by when witnessing violence,” adding it “constantly operates to maintain stability” in the region.

The IDF deferred questions on Thursday’s incident to the police.

A spokesman for the Yesha Council, an umbrella organization that represents Jewish settlements in the West Bank, declined to comment.

Another prominent Israeli human rights group B’Tselem also said that there had been a recent surge in settler attacks against Palestinians in the West Bank but that it was still working to collate the number of incidents.

Both groups said the violence is a continuation of a decadeslong campaign against Palestinians in the disputed territory that Israel seized from Jordan in the 1967 Arab-Israeli war and Palestinians want as part of a future state. They say Israeli authorities have allowed settlers to attack their Palestinian neighbors.

“No one tries to stop these attacks in advance, nor while they happen,” Yael Stein, research director at B’Tselem, said. “This reality is not a coincidence, but is part of Israel’s deliberate policy of privatizing violence that serves its goals: taking over Palestinian land and resources by driving Palestinians out.”

Palestinians are also regularly accused of violence toward settlers including throwing stones, ramming cars and stabbings. But Stein said when this happens the military takes action, arresting and trying suspects.

“It’s not symmetrical,” she said.

The surge in violence came amid an uptick in Israeli plans for more settlement homes in the West Bank.

More than 440,000 settlers now live in the West Bank in settlements that are considered illegal by the majority of the international community, alongside more than 2.7 million Palestinians, according to Peace Now.

However, in 2019 under the Trump administration, the United States reversed its decadeslong position that Israeli settlements in the West Bank are illegal.

As candidate for president, Joe Biden told The New York Times that “Israeli leaders should stop the expansion of West Bank settlements.”