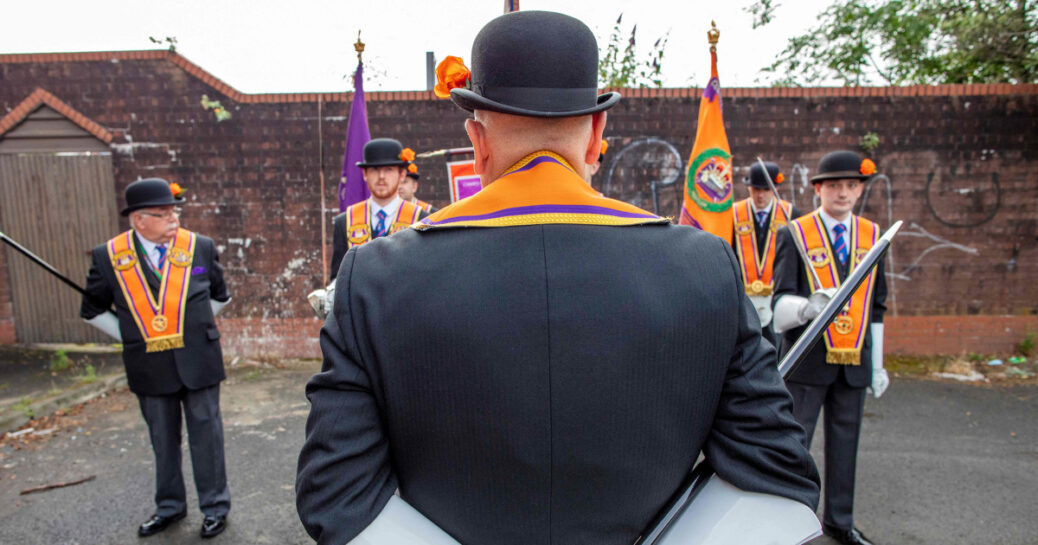 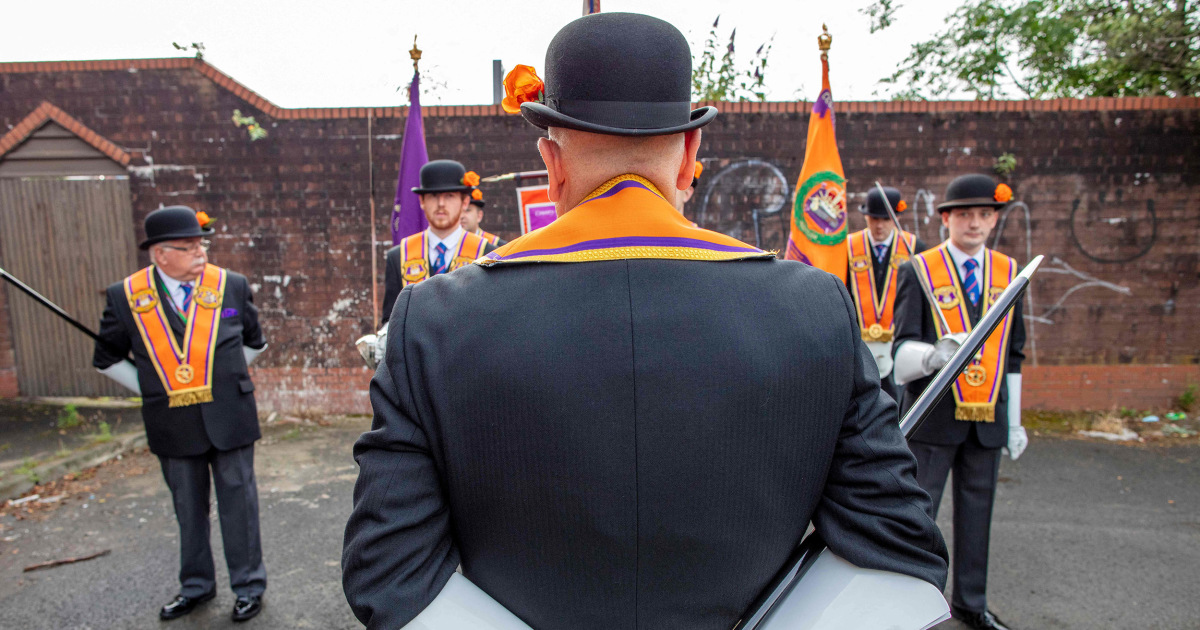 BELFAST, Northern Ireland — As men in ceremonial military attire played flutes and drums behind him, Andrew Park revealed scars from a 1976 bomb that killed two of his friends.

Then he offered a word of warning for President Joe Biden: Irish politics is no joke.

“He’s playing a game he’s not going to suffer from. It’s the people of Northern Ireland who are going to suffer from his rhetoric,” Park, 72, told NBC News last Sunday at a loyalist parade led by the Orange Order — a Protestant brotherhood whose yearly July 12 demonstrations celebrate the 1690 defeat of Catholic King James II, by his Protestant rival, King William of Orange.

“I think he needs to pull that rhetoric in,” Park added.

It’s a common refrain among Protestants in Northern Ireland these days, a place where centuries-old tensions with the British country’s Catholics have been reignited by Brexit. Now Biden, well-known for his pride in his Irish-Catholic ancestry, has become a divisive figure in the long-simmering conflict.

The specter of “the Troubles,” the 30-year conflict that plagued Northern Ireland, still haunts the region.

The dispute pitted Roman Catholic “republicans,” who identify as Irish and want to unite with the Irish Republic south of the border, against Protestant “loyalists,” who feel British and want to remain in the U.K.

More than 3,600 people — mostly civilians — were killed as violence flared between the Irish Republican Army, an outlawed terrorist organization fighting the British state and its army, along with pro-British paramilitary groups like the Ulster Defence Association.

A delicate peace was finally brought to the region with the 1998 Good Friday agreement partially brokered by then-President Bill Clinton, a fellow Democrat and longtime ally of Biden’s.

Biden has never hidden his fondness for the Republic of Ireland, with his penchant for quoting Irish poets, and he has publicly recounted how mistreatment at the hands of the British prompted his forefathers to immigrate to the United States.

“When my great-grandfather got in a coffin ship in the Irish Sea, the expectation was: Was he going to live long enough to get to the United States of America? But they left because of what the Brits had been doing,” he said at his first news conference as president, on March 25.

More recently, he has weighed in on the United Kingdom’s exit from the European Union, known as Brexit. Before he traveled to Britain for the Group of Seven summit in June, Biden’s administration issued a stern warning to British Prime Minister Boris Johnson not to let Brexit threaten peace in Northern Ireland.

The administration is insisting that London respect an agreement with the European Union that draws a customs border in the Irish Sea between mainland Britain and Northern Ireland.

The arrangement, called the Northern Ireland Protocol, has enraged the enclave’s pro-British loyalists.

They say it pulls Northern Ireland closer to the neighboring Republic of Ireland, cementing Protestant suspicions of what they say is Biden’s bias toward Irish Republicanism.

“Does he [Biden] really want to be seen as someone supporting terrorism? I don’t think he does,” said Mervyn Gibson, leader of the Orange Order, which organizes Belfast’s annual loyalist parades. “I don’t think he supports it. But the Irish Republican Army, or IRA, was a paramilitary group devoted to expelling British soldiers from Northern Ireland and unifying the region with the rest of Ireland.”

Pro-Irish nationalists argue that the British government and loyalists also bear responsibility for some of the violence that has scarred the region.

In an effort to address the legacy of “the Troubles,” Johnson and his predecessor, David Cameron, have issued official apologies in recent years on behalf of the British government to victims’ families for the Ballymurphy killings of 10 people in 1971 and “Bloody Sunday” massacre of 13 Catholic demonstrators in 1972.

After Cameron and Johnson’s Conservative Party pushed ahead with Brexit, the Biden administration and the E.U. said the sea border — where goods from the rest of the U.K. are checked as they arrive at Northern Ireland’s ports — is necessary to avoid putting checks and infrastructure on the land border between Northern Ireland and the Republic of Ireland.

Checkpoints between the two territories were a flashpoint for violence during “the Troubles” and were almost entirely removed after the Good Friday agreement.

“President Biden has been crystal clear about his rock-solid belief in the Good Friday agreement as the foundation for peaceful co-existence in Northern Ireland,” Biden’s national security adviser, Jake Sullivan, told reporters on Air Force One on the way to the G-7 summit in Cornwall, England. “Any steps that imperil it or undermine it would not be welcomed by the United States.”

As well as reducing violence, the agreement bolstered the free flow of goods and people between the two territories, fostering an economic boom, particularly in border areas once blighted by sectarian attacks.

Many loyalists in Northern Ireland would still rather see a frontier between themselves and the Republic of Ireland than the Irish Sea border.

But for Catholics and many in Northern Ireland’s business community, the reimposition of a physical border is unthinkable.

“A border would cause chaos. No one would respect it,” said Darren Cunningham, a 41-year-old oyster farmer who exports from Northern Ireland into the E.U. through the Irish Republic — an arrangement protected by the Northern Ireland Protocol.

His business is within sight of the port where Biden’s ancestors boarded a ship bound for America.

The sea border is not without its flaws, and some goods are now harder to ship to Northern Ireland from the British mainland.

Tensions over the issue are already rising, with violence and rioting on the streets earlier this year and graffiti appearing at the Port of Larne warning that “all border staff are targets.”

“Northern Ireland is hard to call, you know, people get upset here very easy. Violence can happen at any given moment, at any given time,” said Brian Madden, a 53-year-old pastor in the poor Protestant Belfast neighborhood of Tiger’s Bay, where tensions with local Catholics run high and the communities are kept apart by a “peace wall.”

Behind him stood a giant tower of wooden pallets residents had erected to burn as part of annual festivities to commemorate the Battle of the Boyne in 1690, when Dutch Protestant King William of Orange defeated Catholic King James II.

An Irish flag adorned the pyre.

New customs checks between the British mainland and Northern Ireland delayed a knee replacement for Madden’s wife, who lost a leg in “the Troubles.”

“Sometimes I wonder who makes these things up. Is there no common sense or rationale about them at all?” he said.

Any attempt by Biden to ease tensions would be welcome, Madden said, but he added that many Americans were poorly informed about the region’s history and had succumbed to Irish Republican “propaganda.”

A few hours later, scores of Tiger’s Bay residents drank, sang and laughed as the pallets they had erected burned, one of several bonfires that turned the Belfast night sky orange.