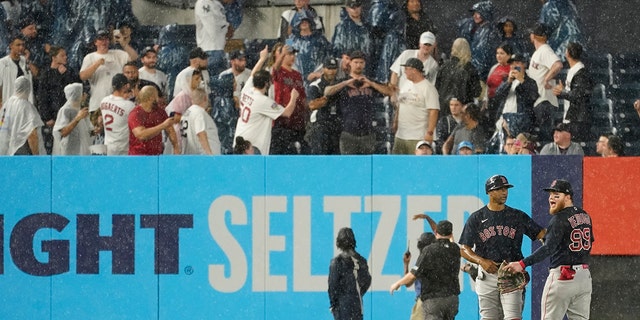 After he was hit, Verdugo headed toward the stands and started arguing with New York fans and was quickly pulled away by teammates and some of the umpires, according to the Boston Globe.

Yankees manager Aaron Boone told reporters after the game it was his understanding that the fan hit Verdugo “point-blank from behind” in the back.

“My understanding is they did catch the guy. Hopefully, he’s in jail right now.”

Boston Red Sox first base coach Tom Goodwin, second from left, calms left fielder Alex Verdugo (99) after he was hit in the back by an object thrown by a fan during the sixth inning of a baseball game against the New York Yankees, Saturday, July 17, 2021, in New York. (Associated Press)

Verdugo told reporters he threw the ball into the stands to a young Red Sox fan, but a Yankees fan intercepted it and threw it back onto the field and hit Verdugo.

The incident happened in the sixth inning when the score was 1-1.

It also happened on the same night that a Nationals-Padres game in Washington was suspended following gunfire outside Nationals Park that police said left at least four people wounded – as major U.S. cities continued to grapple with spikes in violent crime.

In New York, the fan was ejected from the game and may face arrest, according to CBS Sports.

After Verdugo left the field, Red Sox manager Alex Cora then signaled for the rest of the team to follow suit until the game resumed minutes later, according to the Globe.

“This is just a game,” Cora said afterward. “It’s a game. It’s not life and death and it’s not this drama, and the fact that people come to the ballpark and they decided to throw a baseball (at) one of the players, I was in shock that that happened.”

Boone told reporters if he had been Cora he would have done the same thing.

“There is zero place for that in this great game,” the manager said.

“There is zero place for that in this great game.”

Following another rain delay, the Yankees pulled off a 3-1 win.