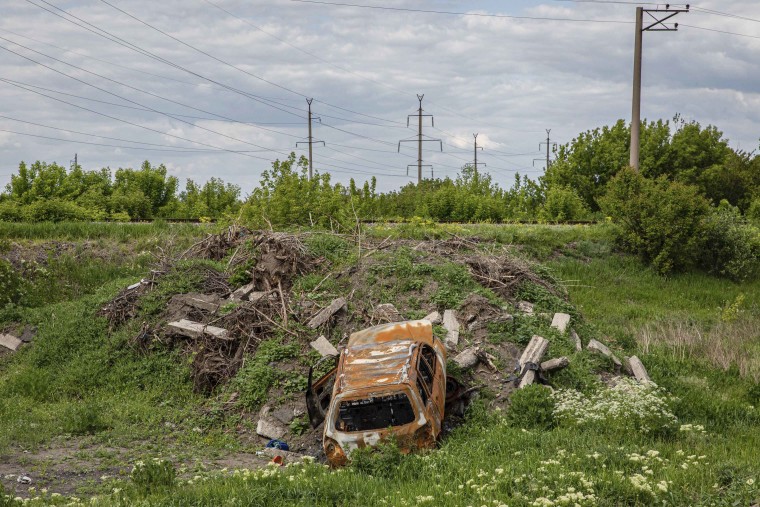 The province of Luhansk, together with neighboring Donetsk, forms the industrial Donbas region that has become the key focus of the Kremlin’s war offensive after it failed to capture the capital Kyiv and recently was pushed back from its positions around Ukraine’s second-largest city, Kharkiv, in the northeast.

Russia has failed to make much progress in the Donbas for weeks, and seemingly further scaled back its ambitions after originally intending to take full control of the region. But the offensive does now seem to be bearing fruit, with Russian troops advancing behind intense bombardment.

President Volodymyr Zelenskyy said in his overnight address that the Russians were “trying to ramp up pressure” in the Donbas, which they had “completely destroyed.”

“It’s hell there,” he said. “And it is not an exaggeration.”

It’s in Luhansk that there were clearer signs of Russian progress, however. The military and regional governor Serhiy Haidai both said that invading troops were “conducting an offensive operation in the areas around” Lysychansk and Severodonetsk, two key cities in the Luhansk province.

The Ukrainian military also said that Russian forces were “trying to improve the tactical position of their units near Volodymyrivka,” Horowitz noted. That town is around 9 miles west of Popasna, he said, suggesting Russian forces did breach through some of the Ukrainian defenses gathered around the strategic location.

The Institute for the Study of War, a U.S.-based military think tank, similarly said in its most recent assessment that “Russian forces are intensifying operations to advance north and west of Popasna in preparation for an offensive toward Severodonetsk.”

In what appeared to be a reference to these advances, Russian Defense Minister Sergey Shoihu said Friday that the “liberation of the Luhansk People’s Republic is nearing completion” and that Russian forces were expanding their control over the Donbas.

This comes as Moscow is likely to reinforce its forces in the Donbas once it fully secures the southern port city of Mariupol, the U.K. defense ministry said Friday, after months being tied up by the last pocket of Ukraine’s resistance in the city.

But while the Russian advances are notable, experts said it’s too early to talk about any changing of the tide in the battle for the Donbas.

“It’s about whether it can be sustained and consolidated and pushed on forward from,” said Phillips O’Brien, professor of strategic studies at the University of St. Andrews in Scotland.

All in all, it’s a sign of a hugely stripped-down offense, which went from trying to take a big area of the Donbas at the start to basically just snipping off the tip of the Ukrainian position, O’Brien said.

“On the other hand,” he added, “you could say that at least the Russians have shown the ability to, for the first time in a while down there, have the strength to push forward.”