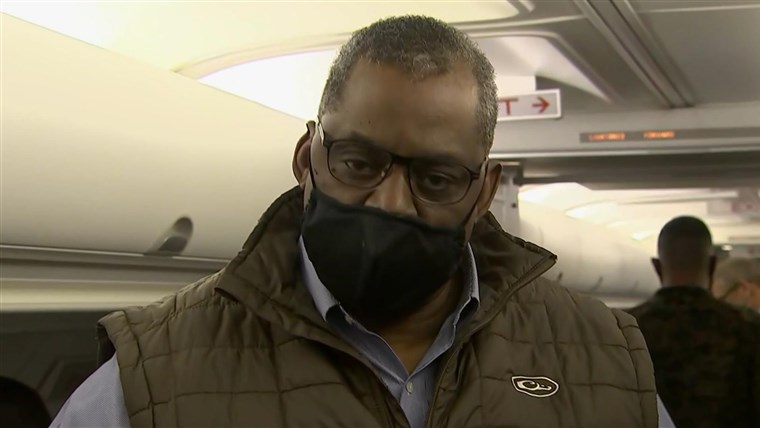 WASHINGTON — President Joe Biden on Thursday ordered airstrikes on buildings in Syria that the Pentagon said were used by Iranian-backed militias, in retaliation for rocket attacks on U.S. targets in neighboring Iraq.

Kirby told reporters Friday the bombing caused “casualties” but said it was too early to say precisely how many militia fighters might have been killed or wounded.

“We have preliminary indications of casualties on site, I’m not going to go any further than that,” Kirby said.

The operation was the first known use of military force by the Biden administration, which has for weeks emphasized plans to focus more on challenges posed by China.

The president’s decision appeared aimed at sending a signal to Iran and its proxies in the region that Washington would not tolerate attacks on its personnel in Iraq, even at a sensitive diplomatic moment.

Three rocket attacks in one week in Iraq, including a deadly strike that hit a U.S.-led coalition base in the northern Iraqi town of Irbil, presented a test for Biden only weeks after assuming the presidency. The rocket assaults coincided with a diplomatic initiative launched by the administration to try to revive a 2015 nuclear agreement between Iran and world powers.

Kirby said two F-15 fighter jets dropped seven precision guided munitions on buildings used by the Iranian-backed militias, totally destroying nine structures and partially destroying two. The buildings were located in Abu Kamal, near the Iraqi border, a location known as a hub for the Iraqi Shiite militias supported by Iran, he said.

The airstrikes were ordered in response to a series of rocket attacks against American and coalition personnel in Iraq, “and to ongoing threats to those personnel,” the Pentagon said in a statement on Thursday evening.

The buildings near the border were used by militias including Kataib Hezbollah and Kataib Sayyid al-Shuhada, according to the Pentagon.

Iranian officials did not immediately react to the strikes.

The Syrian government condemned the attack Friday, calling it “cowardly U.S. aggression” in a statement from the country’s foreign ministry that was published by state media.

The strikes violate international law and “will lead to consequences that will escalate the situation in the region,” the foreign ministry said, according to state news agency SANA.

Russia, one of Syrian President Bashar Assad’s chief backers, said it was given just four or five minutes’ warning before the strikes.

“This kind of notification does nothing when the strike is literally already on its way,” Foreign Minister Sergey Lavrov told reporters in Moscow.

The U.S. was operating in Syria “illegally,” he said, and called for better communication with the Biden administration.

The Pentagon defended the legality of the strikes, arguing Article II of the Constitution grants the president powers as commander in chief, and citing article 51 of the U.N. charter, providing countries the right to “self-defense” in response to an attack.

The Biden administration did inform Russia in advance of the air raid, Kirby said, but indicated it could not do so too far in advance without jeopardizing “operational security.”

The strikes provoked criticism from some Democrats in Congress, who questioned the legal rationale and demanded to know why the White House did not consult with lawmakers more closely beforehand.

“The American people deserve to hear the Administration’s rationale for these strikes and its legal justification for acting without coming to Congress,” said Sen. Tim Kaine of Virginia, a member of the Senate Armed Services and Foreign Relations Committees.

“Offensive military action without congressional approval is not constitutional absent extraordinary circumstances,” he said. “Congress must be fully briefed on this matter expeditiously.”

The administration said officials did brief congressional leadership before the air strikes.

The Syrian Observatory for Human Rights said most of the 22 people killed in the bombings were members of Iraqi militias. The monitoring group did not provide details about how it obtained that figure but Rami Abdulrahman, head of the rights organization, told NBC News it was based on speaking to sources inside Syria.

He added that the death toll was expected to rise, due to the number of people seriously wounded.

Iran’s state broadcaster IRIB news, meanwhile, said 17 “resistance fighters” were killed in the strikes, but also didn’t provide detail about the source of that figure other than citing “reports.”

A senior U.S. defense official told NBC News on Thursday evening that the target was a transit hub near the Iraqi-Syrian border used by the militia fighters, and it was too early to say what casualties might have been inflicted on the militants.

“The operation sends an unambiguous message: President Biden will act to protect American and coalition personnel. At the same time, we have acted in a deliberate manner that aims to de-escalate the overall situation in both eastern Syria and Iraq,” the Pentagon said on Thursday.

Shortly after the strike, Defense Secretary Lloyd Austin told reporters travelling with him that the administration had been “very deliberate about our approach.”

“We’re confident that target was being used by the same Shia militia that conducted the strikes,” Austin said, referring to the recent rocket attacks in Iraq on U.S. and coalition personnel.

The Pentagon had said previously that it was awaiting the results of an Iraqi investigation into the Irbil rocket attack.

“We allowed and encouraged the Iraqis to investigate and develop intelligence and that was very helpful to us in refining the target,” said Austin, who spoke en route to Washington after a visit to California and Colorado.

Biden had approved the operation on Thursday morning, he said.

A civilian contractor was killed in the Irbil rocket assault, and a U.S. service member and others were wounded. At least two 107mm rockets landed on the base, which also hosts Irbil’s civilian international airport.

NBC News had previously reported that Iranian-backed militias were most likely behind the Irbil rocket attack, and that the weapons and tactics resembled previous attacks by the Iranian-linked militias. However, it was unclear if Iran had encouraged or ordered the rocket attack.

An obscure group called Saraya Awliya al-Dam, or Custodians of the Blood, claimed responsibility for the Irbil attack. But former diplomats and regional analysts said the group was merely a front organization created by the main Shiite militias in Iraq.

Following the rocket attack on the Irbil base, Iraq’s Balad air base came under rocket fire days later, where a U.S. defense firm services the country’s fighter jets, and then two rockets landed near the U.S. Embassy compound in Baghdad.

Iran has rejected any connection to the rocket attacks.

In a phone call Tuesday between Biden and Iraqi Prime Minister Mustafa al-Kadhimi, the two leaders agreed that “that those responsible for such attacks must be held fully to account,” according to a White House readout of the conversation.

Dennis Ross, a former senior U.S. diplomat who worked on Middle East policy under several presidents, said the administration had lowered the risk of causing friction with the Iraqi government by hitting targets in Syria.

“By striking facilities used by the militias just across the border in Syria, the risk of blowback against the Iraqi gov is reduced,” Ross tweeted.