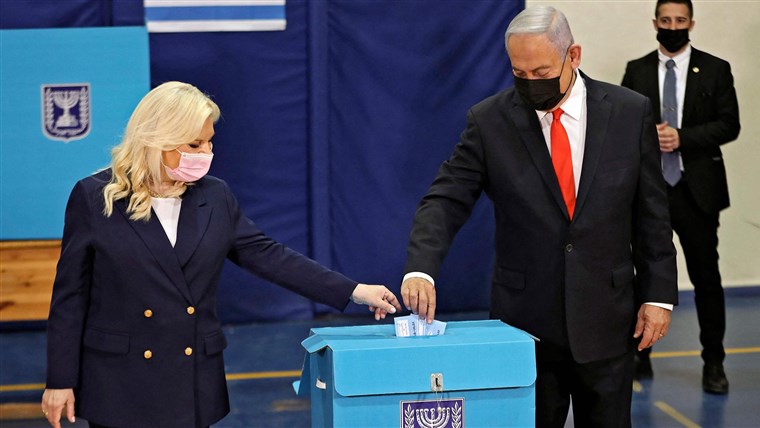 Early results suggest Israel’s fourth election in two years will lead to yet another indecisive result, giving neither Benjamin Netanyahu nor his opponents a clear path to forming a government.

With 88 percent of the vote counted as of Wednesday morning, Netanyahu’s Likud party had won around 30 seats in the Israeli parliament and emerged by far as the largest single party.

But even with the support of smaller nationalist and religious parties, Netanyahu’s right-wing bloc looked just short of the 61 seats needed to form a majority in Israel’s 120-seat parliament.

Netanyahu’s opponents — a coalition of parties from the left, right, and center determined to end his 15 years in power — also appeared unable to muster the numbers for a majority.

Israel’s election commission said final results are not expected until Friday because of delays due to Covid-19 restrictions and the figures may change as more ballots are counted. However, weary Israeli voters were already beginning to discuss the prospect of a fifth election.

“This proves yet again that Israelis are split right down to the middle when it comes to the main question that defines Israeli politics today: Are you for or against the continuing of the premiership of Benjamin Netanyahu?” said Yohanan Plesner, president of the Israel Democracy Institute think tank.

Initial exit polls looked promising for Netanyahu and he claimed victory shortly after polls closed Tuesday. “Citizens of Israel — thank you!” he said in a tweet. “You have bestowed a huge victory on the right-wing and the Likud under my leadership.”

But as the hours passed and actual ballots were counted, the right-wing bloc’s lead looked to be slipping away.

The results were scrambled further as it appeared that a small Islamist party known as Ra’am had defied expectations and won enough votes to qualify for four to five seats in the Israeli parliament.

Unlike the leaders of other Arab parties, Abbas has suggested he is open to supporting either the pro-Netanyahu or the anti-Netanyahu bloc as long as he can bring benefits to his community.

He ruled nothing in or out in an interview with the Ynet news site Wednesday. “Whoever wants to come in contact with us, we will be happy to hold talks with him and raise our positions and demands,” he said.

Once the vote totals are finalized, party leaders will meet with Israeli President Reuven Rivlin and make a recommendation as to who should be the next prime minister.

The president, whose role is largely ceremonial, will then task either Netanyahu or another party leader with trying to form a majority government. That leader has six weeks to negotiate with other parties to put together a coalition.

If they fail, another leader may be given a chance to try to form a government. And if no one is able to command a majority in parliament, the country will head to yet another election.

Netanyahu put Israel’s successful Covid-19 vaccine rollout at the center of his campaign. More than half of Israelis have received at least one dose — one of the highest figures anywhere in the world.

His campaign slogan, “Back to Life,” was designed to reflect how vaccinations have allowed Israel to return to a semblance of normal life. As polls closed Tuesday, Israelis gathered in recently reopened bars and cafes to watch the results.

Separately, Netanyahu is currently on trial for corruption. Prosecutors accuse him of fraud, bribery and breach of trust in a series of cases related to claims he abused his position as prime minister. Netanyahu denies the charges.

The election ended in a disappointing result for New Hope, a party made of former members of Netanyahu’s Likud who broke away to challenge their leader. The party, led by former minister Gideon Saar, began the election polling at 20 seats but early results suggest it has won only six.